diagram of a ship camouflage viewing theatre in 1918 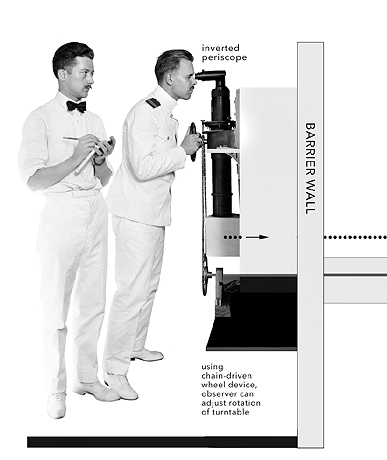 Recently, we devised a diagram of the type of observation theatre (equipped with an upsidedown periscope) that was first used by the British and then the Americans (and most likely other Allies too) for testing dazzle ship camouflage schemes during World War I.

Reproduced above is the left half of the diagram, showing two camouflage artists. Included in the diagram are American Navy camoufleurs Kenneth MacIntire (taking notes), and Harold Van Buskirk, who is looking through the periscope, trying to determine the angle at which a camouflage-painted ship model is headed.

As shown below in the right half of the diagram, the ship model was placed on an adjustable turntable, on the other side of a barrier wall. Behind that turntable was a painted canvas background that could be changed to simulate various visibility factors, such as weather or surrounding. Illumination could also be changed. The turntable (or perhaps the surface on which it was mounted) was marked with degree increments. When the periscopic observer had rotated the ship model to an angle that appeared correct, the person on the other side of the wall could easily tell the exact degree to which the observer’s adjustment was mistaken. The greater the error, the more effective the scheme would likely be in deceiving the periscope calculations of a U-boat gunner. 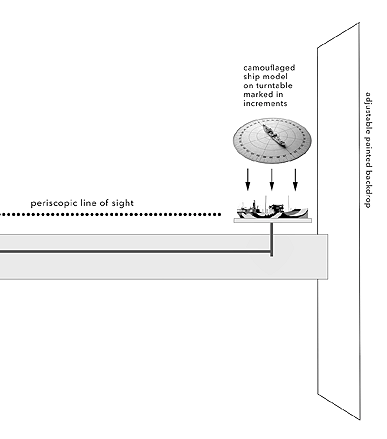 An especially clear, succinct account of the entire process (albeit, not every detail is fully correct) was published in the New Zealand Tablet, on January 29, 1920, including the following excerpt—

…a small wooden model of each ship was made to scale, on which was painted a dazzle design. This was carefully studied in a prepared theatre through a submarine periscope, and when the design had been so altered and arranged that it gave the maximum distortion, the model was handed over to a trained plan-maker, who fitted that design to scale for the particular ship it was intended. The plan was then dispatched to the port at which the particular ship was lying, and transferred to the vessel. Thus a model and plan were made for every ship. For each type a number of designs were made, so that on arrival at port any ship requiring a dazzle plan could be immediately camouflaged. Sometimes as many as 100 vessels were being painted at the same time in one port.

Not all WWI ship camouflage testing theatres were constructed just like this. Some were less elaborate, even makeshift, while others differed in other regards, but the overall principle was the same.