Thayer in Relation to Conservation & Wildlife 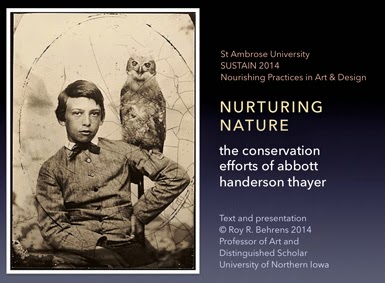 Above Title slide for an illustrated lecture on Abbott Handerson Thayer in relation to nature, conservation, and wildlife preservation, presented on March 28, 2014, at a conference titled SUSTAIN: Nourishing Practices in Art and Design at St. Ambrose University in Davenport IA.

An art student was copying one of Abbott H. Thayer's paintings at the Metropolitan Museum of Art one day when a plainly dressed man, who looked as if he might be a mechanic, approached and, posting himself  at the young man's elbow, watched him as he labored over his subject.

"You've got the angle of the mouth wrong, and the left eye too oblique," remarked the man decidedly.

The student took no notice of the unsolicited criticism.

"There is too much yellow in your flesh tint," continued the man.

Still no reply from the student, who ostentatiously slapped on more yellow in the highlight on the nose.

"Did you hear what I said?" questioned the man.

"Yes, I heard," responded the student, turning and frowning at his modest looking critic. "What do you know about it anyway?"

"I ought to know something about it," was the smiling response. "It was I who painted the picture."
Posted by Roy R. Behrens at 5:24 PM

Above Detail from an index page for a newly posted website on American artist, naturalist and pioneering camoufleur Abbott Handerson Thayer. Concurrent with the opening of a new exhibition of Thayer's camouflage-related work at the Army and Navy Club in Washington DC, a full-color catalog is now available online.

Abbott Handerson Thayer (1849-1921) was an important American artist in the last quarter of the nineteenth century, and his paintings were commissioned by some of the foremost art collectors in the United States. He was also a lifelong wildlife advocate whose artistic focus never strayed far from his personal fascination with the natural world. In the 1890s, he began to publish articles in scientific journals on his developing theory of protective coloration. Through observing wildlife, he discovered that the coats of many animals employ color patterns that conceal them in their natural environments. He noticed, for instance, that the flecked coloring of woodland birds resembles the dappled effect of sunlight seen through branches and leaves. Plumage, according to Thayer, “is a sort of patchwork of pictures, subtly intermingled, each an epitome of some particular type or detail of woodland scenery.”  He called this phenomenon a “beautiful law of nature.” >>more>>
Posted by Roy R. Behrens at 8:06 AM 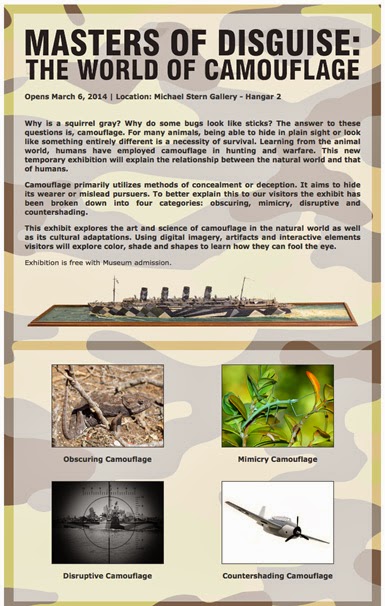 Above Promotional panel for Masters of Disguise: The World of Camouflage, on view at the Intrepid Sea, Air & Space Museum in NYC through August 24, 2014.

From Mark Yost, "Review of 'Masters of Disguise,' at the Intrepid: An exhibition of camouflage in nature and in wartime" in the Wall Street Journal (March 18, 2014)—

The Intrepid Sea, Air & Space Museum, the historic aircraft carrier moored on Manhattan's West Side, could have taken the easy way out for its latest exhibit on camouflage. It could have pulled photos out of the archives showing ship camouflage in World War I and II—something most people are familiar with—found a nook on the main hangar deck to display them, and been done with it.

What Eric Boehm, the museum's curator of aviation and aircraft restoration, did instead was give visitors a thorough and engaging history of camouflage in both the natural and the man-made world. >>more>>
Posted by Roy R. Behrens at 5:38 PM

In earlier posts, we've talked about camouflage-related sheet music from World War I. Above is the cover (artist unknown) of yet another (awful) song called Camouflage: Nut Song No. 2 by L. Wolfe Gilbert and Anatol Friedland (1917). The lyrics read as follows—

This war has brought us trouble,
And lots of humor too,
For life is just a bubble,
I'll prove that fact to you;
Our friends abroad have coined a word
that probably we've never heard,
It sounds so funny and absurd,
It surely is a bird.
Oh, Dan, Oh, Dan,
you dictionary man.