IF YOU WILL cut out of black paper the silhouette of a steamer as in Figure 1, you will see that on a dark boat painted in one solid color the contour is perfectly visible. Cut exactly the same silhouette out of a column of fine print and you have something equivalent to low visibility camouflage (see Figure 2). It is less visible than the first, but the outline of the steamer can still be discerned. Figure 3, where the pattern of a steamer has been cut out of larger type, illustrates the dazzle system in camouflage, and you will note that the contour of the vessel is now exceedingly difficult to determine.
Posted by Roy R. Behrens at 9:09 AM


[During World War I] Yankee ingenuity found application in the devising of methods of putting on the camouflage with the utmost speed and efficiency. In the gun carriage plant of the American Car and Foundry Company, for instance, I watched the girls in khaki overalls spraying camouflage on the finished caissons and wheels one afternoon. The paints of different colors, in huge tanks, were deposited by means of a gigantic reproduction of the air brush, used by artists everywhere.

The main office of the American Car and Foundry Company was located at 165 Broadway in New York. Beginning in June 1917, the company's Detroit production facility was contracted by the US Government to produce 10,970 artillery vehicles at a rate of one hundred per day. A peculiar innovation of these is that a brightly-colored disruptive camouflage pattern (see photo above) was airbrushed onto these vehicles as part of their manufacture. It's also interesting that the exact same camouflage pattern was applied to each of them.

The three photos below (along with a number of others) were published in 1919 in a book titled The American Car and Foundry Company in Khaki: Its Production Achievements in the Great War, which was produced and distributed by the company. Shown below are views of the camouflage being applied by women workers in the factory's paint shop (as described above by Stockbridge), the outdoor storage of thousands of these (awaiting shipping instructions), and a crated vehicle ready to ship. 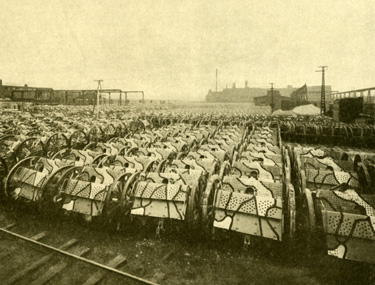 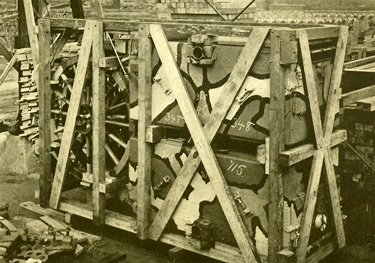 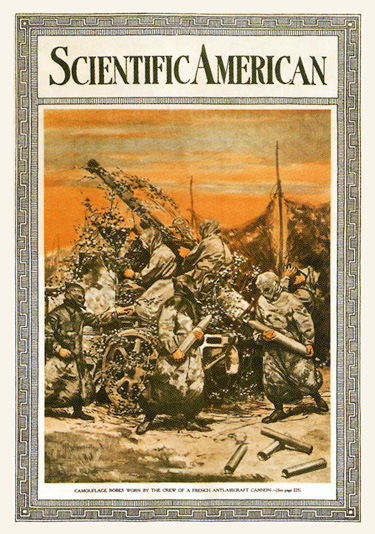 
Cagoules were paint-splattered hooded cloaks devised by the first French camoufleurs, to prevent themselves from being seen by aerial observers as they manned long-range artillery. A wonderful painting of this [shown above] was published on the cover of Scientific American on September 29, 1917. Some of these cloaks still exist, including prototypes designed by French camoufleur Eugene Corbin, and reproduced in Blechman• (2004:126-127) and Newark•• (2007:83). They are also described in Kahn••• (1984:148), who states the following: "Hidden beneath camouflaged cagoules, hooded uniforms…was a ghoulish image of the modern soldier, whose finely fitted and brilliant red and blue clothing was replaced by an amorphous costume of drab greens and browns that turned the individual into a frightening form."

A photograph of a group of hooded artillerymen was also published in the Popular Science Monthly, Vol 93 No 3, September 1918, p. 335, as shown below. The headline reads "Not Monks, But Camouflaged Artillerymen." 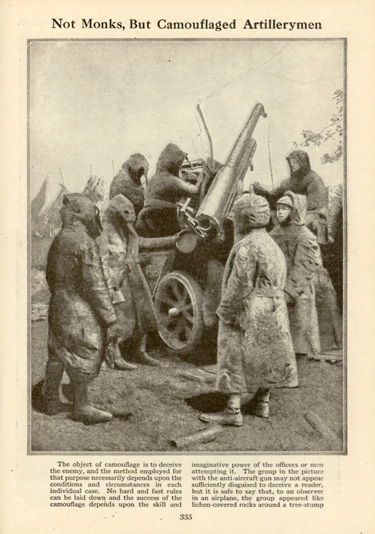 Amazingly, full-color French photographs of comparable outfits have also survived (see adjusted example below), and can be found online by searching "camouflage" at the Bibliotheque nationale de France.