A couple of years ago, we posted a photograph of French soldiers applying dark coloring to a white horse, to make it less conspicuous. Later, we discovered other references to the same practice, as well as a wonderfully funny cartoon from Life magazine. It was also used by the American Army  (during the same time period) in its military activities on the US-Mexican border. In our earlier posts, we expressed concern about the harm that might result to the horse, since the pigment that was used was potassium permanganate (aka permanganate of potash or Condy's crystals). As we noted, "Among US soldiers during WWI, it was used twice daily as an irrigation in treating gonorrhea. Today, it is used in connection with eczema, blisters and athlete's foot—and in rocket propellent." It turns out that this horse-painting was practiced by not only the Allies but also by the Germans. There is a photograph (above) from a wartime issue of Scientific American (February 6, 1915) that shows a horse being painted by German soldiers.

Near the end of the war, it was still being practiced, as evidenced by this excerpt from an eyewitness article in the Saturday Evening Post (September 21, 1918, p. 52)—

At five a.m. we rose and went to the railway, where we saw the beloved regiment, in the midst of which we had lived so many years, entrain. Perfect order prevailed, though the embarkation took several hours. Each squadron occupied a train. Freight cars fitted up for soldiers and horses; platform cars for baggage and provisions; and at the end a car or two, second class and far from clean, for the officers, doctors, and so on. A most curious sight were the horses belonging to the regimental band. It was a tradition of the regiment that though the other soldiers were all mounted on bay horses the band should ride pure white steeds. With the new ideas of warfare these animals became a danger to their unit, and had been dyed for safety in olive brown. This was their first appearance in their disguise; and their comrades in the four squadrons did not recognize them and made a dreadful fuss, showing such desire to avoid the poor painted creatures that the latter felt insulted, and regarding themselves as victims of a ridiculous mistake they lost no opportunity of protesting. Their humiliation turned them timid and fractious, and it took time and persuasion to get them into their cars. Everyone rushed to help; and officers as well as soldiers were amused at the result of this first essay at camouflage, which came as a diversion to our strained feelings.

Update: Yesterday we ran across a clearer, albeit edited version of the photo we posted in 2015. See image below. We found it in the Christmas issue of Le Miroir (No 56), 1917, p. 14. Not certain if soldiers are German or French. 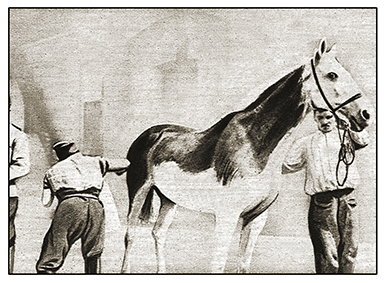 We've featured American artist and teacher Alon Bement (shown above) at least three times in earlier blog posts. As happens with all of us, he would be all but forgotten today were it not for the fact of his influence on the painter Georgia O'Keeffe. During World War I, he also served as a civilian ship camoufleur, an experience he wrote about in newspapers and magazines. From 1920 to 1925, he was the director of the Maryland Institute College of Art (known then as the Maryland Institute School of Fine and Practical Arts). According to that school’s website, as its director—

[Alon Bement] brought a modernist sensibility to the school, introduced extension courses for high school students, and sent art education instructors to remote parts of Maryland. He made the public exhibitions hosted on campus an institutional priority including one of the first public shows of work by Henri Matisse in the United States.

In the 1930s, he became associated with the William E. Harmon Foundation and served as Director of the National Alliance of Art and Industry, during which he played a role in the production of two educational films, The Negro and Art (1933) and We Are All Artists (1936), both of which are now online.

Alon Bement, a camoufleur, first class, of the United States Shipping Board, and formerly a teacher at the Teachers’ College, Columbia University, was the speaker at the Senior Assembly of the Manual Training High School yesterday. At the beginning of the war Mr. Bement, who had considerable reputation as an artist, was called to act as a naval camoufleur. He was sent to Washington DC where he worked out designs for camouflaging ships, using small models for the purpose. If the designs were found to be feasible, they were reproduced on a linen sheet, taken to a shipyard and painted on a ship.

Mr. Bement went into detail to show how portions of the ship were marked out for certain colors by means of a hand mirror when the sun was shining. The camoufleur would stand on the edge of the dry dock and reflect the light along the lines which were intended to mark the borders of the various colors. In this way the apportioning off of the ship was readily accomplished.

Mr. Bement told of other schemes which were attempted to combat the submarine menace such as the construction of an outer hull to prematurely explode the torpedo. This means was hastily abandoned because such a hull would slow down the ship to such an extent that it would fall an easy prey to the U-boats.

He also explained why only the transports, freighters and destroyers were camouflaged and not the battleships. The big fighters were not daily subject to submarine attack so that it was unnecessary to give them their “make-up” and since it costs $3,000 to paint a battleship attention was confined to the first mentioned ships.

Mr. Bement told of how in a captured German U-boat, the British found fifty-eight pages of a leaflet in the commander’s cabin, telling what methods the Prussians were taking to combat the camouflage of Allied ships. With this find, the Allied camoufleurs were able to take new steps to offset the year’s calculations of the Germans.

One of the most interesting parts of this news article is the description of the use of a hand mirror to convey to the painter—whose task it was to mark out on the actual ship the camouflage color divisions with chalk—the location of "dots" from a distance (a process that's all but identical to the use of a pouncing wheel in transferring a pattern from one surface to another). About a year ago, we posted another news account of the same technique.

Art historian Ann Elias, Associate Professor of Theoretical Enquiry at the Sydney College of the Arts, The University of Sydney AU, is well-known for her writings on art and camouflage. Now she has produced a book (see cover above) about aspects of the significance of the representation of flowers in art, and especially Australian art. Titled Useless Beauty: Flowers and Australian Art (UK: Cambridge Scholars Publishing, 2015), go online here to find out more. Below are two recent statements about this thoughtful, interesting book.

Ann Elias convincingly argues for the "useless beauty" of flowers and their significance in constructing a comprehensive and inclusive record of the art of Australia. Dancing elegantly through history to elucidate the role of flowers in imparting complex narratives of social life, celebrations, remembrance, attitudes to death, notions of gender, sexuality and cultural difference, she covers a wide territory with elegance and precision. Underlying her thesis is a deeper question about beauty and whether there is value in attending to its undoubted allure when making art, about flowers or anything else. The many illustrations prove her point.

Who would think the flower painting genre could tell such a dynamic history of western art and elucidate the contradictions, social and political conditions of Australian culture. Through this clear and very readable account of the flower painting traditions in Australia, Ann Elias reveals the way these forms of "useless beauty" give us insights into the moral and aesthetic polemics, the anxieties, desire, ambitions and aspirations of Australasian art and culture. This book takes us on a journey through the 20th century, recalling the roots of European traditions, the measures of taste and beauty that were dominant allegories for good living. Elias outlines the gendered political separation of art (useless beauty) and science, the true nature of things.  All the more surprising is that artists such as Tom Roberts, George Lambert, Hans Heysen and Arthur Streeton gave such serious attention to the motif of the flower. We hear from Elias her rich insight and the many examples of the work of these heroic Australian painters, and see the care with which they attended to these gentle subjects.
Posted by Roy R. Behrens at 2:19 PM

Above Cover of the latest camouflage-related book, titled Hidden in Plain Sight: The Social Structure of Irrelevance, just out from Oxford University Press. It's the latest achievement by Rutgers sociologist Eviatar Zerubavel, who is well-known for his earlier books, such as The Elephant in the Room: Silence and Denial in Everyday Life (2006) and (our favorite) The Fine Line: Making Distinctions in Everyday Life (1993).

In Zerubavel's insightful and wide-ranging book, among the subjects introduced is a current encryption technique known as steganography. Now practiced in its digital form, the term was originated in 1499 (so says Wikipedia) by Johannes Trithemius in Steganographia, "a treatise on cryptography and steganography, disguised as a book on magic." We ourselves first learned about it in 2006 at an international conference at the University of Northern Iowa on Camouflage: Art, Science and Popular Culture, at which digital media scholar Eugene Wallingford (UNI Computer Science Professor) offered a wonderful overview of current uses of digital steganography.

Here is an excerpt from Zerubavel's text about steganography (pp. 35-36)—

There is a particular form of background-matching camouflage known as steganography, in which actual "signals" are purposely designed to be mistaken for mere "noise" and thereby effectively ignored. One can thus send a covert message in such a way that no one apart from oneself and one's intended audience (who are in fact usually alerted to expect it) even suspects its existence. Whereas in cryptography  only the content of the hidden is concealed, in steganography, its very existence is concealed as well.
Posted by Roy R. Behrens at 8:53 AM