At the end of May 2019, we posted a lengthy article on British-born artist Frederick Alexander Pawla (1876-1964), who was in charge of the US Army’s Embarkation Service during World War I. In that capacity, he oversaw the camouflage of “many of the army transports, particularly cargo carriers.” 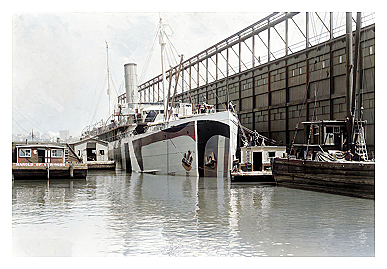 More recently, we have found out more about Pawla. Specifically, we have located a series of photographs that document the process of applying a dazzle camouflage pattern that (most likely) Pawla was the designer of. The name of the ship was the USS City of Atlanta. It is shown above, with its camouflage in process of being applied.

As is evident in the photograph, the design makes use of a traditional artist’s illusion. The camoufleur has inserted a sharp white upright line on the starboard side of the bow, which will make it appear from a distance that the ship is headed at an angle to the right. He has strengthened that illusion by painting a trompe l’oeil (“fool the eye”) anchor to the left of that white line, then aligning it with an actual anchor on the right. A second actual anchor, which can be seen faintly from an angle on the port side of the bow, was probably painted to disappear, to blend in with that side of the ship.

The process of painting the ship is documented by a series of three photographs, two of which show the camouflage artists in the process of applying the dazzle designs on an upper section of the ship (identified in government records as the City of Atlanta). Earlier in the process, a camouflage artist had used chalk to mark out the color boundaries, while also using symbols to indicate which paint colors to apply (K designates Black, W indicates White) in which areas.

In the first photograph in this series, two men are strengthening those chalk boundaries, using white paint. In the second photograph, white paint is in process of being applied to an area that was labeled W. In the third photograph, one can see the finished result, with the black (K) and white (W) areas having been filled in, as has another color area (designated as 11) that cuts across the window, which is painted black. 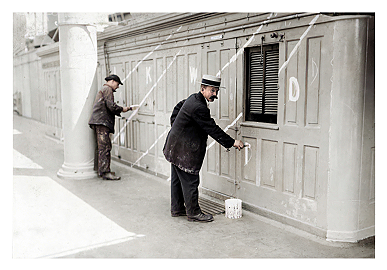 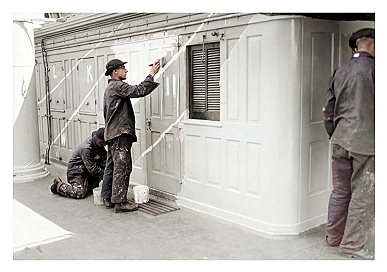 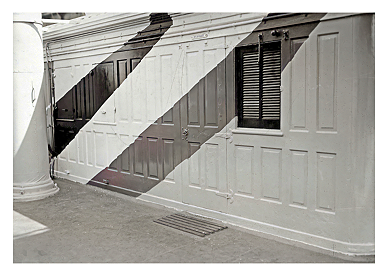 Two clarifications should be noted: (1) We can see the light/dark value of color that cuts across the window, but the color itself is not identifiable. This is because this is an AI digitally-colorized version of a grayscale photograph (there are no color photographs of WWI ship camouflage), and current AI colorization cannot yet determine the hue that was actually used on the ship.

(2) Notice also that the camouflage pattern does not extend onto the floor of the deck. In WWI ship camouflage, it was considered unnecessary to apply the pattern to the deck because the design was addressed to the low-level viewing angle of a U-boat periscope. From that position, the deck surface was not visible. In contrast, during World War II, disruptive camouflage patterns were applied to the deck surfaces of ships, because other viewing angles (such as aerial views) had to be addressed as well. For more on this, see Disruption Versus Dazzle (online access). 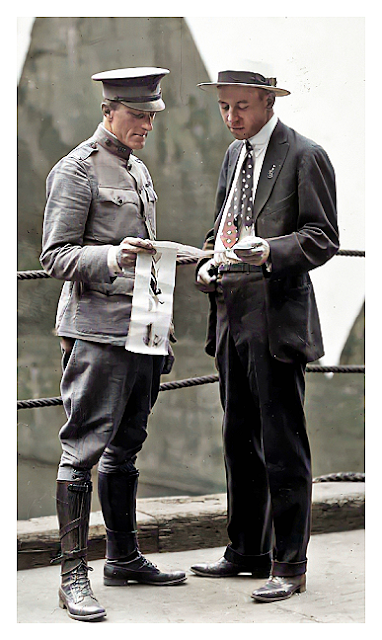 The last of the five US government photographs included on this blogpost shows two American camoufleurs (the Army officer on the left may be Frederick Pawla), standing beside a dazzle-camouflaged ship (identified in the caption as the City of Atlanta), looking at a diagram for a ship camouflage plan, and most likely discussing the progress.

British Steamer: Is she coming or going, which Is it?

FREIGHTER RAMS AND SINKS SUBMARINE  in The Austin American (Austin TX), May 3, 1918—

An Atlantic Port, May 2—A British freight steamer fresh from the yards of her builders celebrated her maiden trans-Atlantic voyage by running down and sinking a German U-boat off the Irish coast, her crew reported upon their arrival today.

The freighter was equipped with the latest anti-submarine devices, which proved very effective.

The submersible came to the surface suddenly a short distance off the ship’s bow and was caught by the British helmsman’s quick work almost before the U-boat commander could puzzle out through the steamer’s remarkable camouflage whether she was going or coming.

Frenchmen shore is wonders with a bucket o' paint

…“I see by the papers,” Lige was saying, “whar’bouts the Gov’ment is sendin’ over some painter fellers to Yurope to put camel flags on our army.”

“Camel what?” I inquired, puzzled. “What kind of flag is that?”

“‘Tain’t no flag a-tall, “ Lige said. “It’s a art. You take a cannon, mebbe, an’ you paint it to look like a plowbeam, so to speak, an’ a common ord’nary waggin will look like a hayrick. It’s easy ef you know how.”

“Oh!” I exclaimed, a light dawning on me. “You mean camouflage.”

“No, I don’t,” Lige insisted. “I mean camel flags. It’s a French word mean’ to kiver up. Them Frenchmen shore is wonders with a bucket o’ paint or a skillet, although the only painters which I ever see was Irish an’ b’longed to a union.”

“Shore—the stepladder kind. But when it comes to that, this here Lee Starr was the best camel flagger which I ever see,” Lige added reflectively. “Whensoever he got through paintin’ a thing it warn’t what you thought it was a-tall—not even hisself.”…

Fighting the U-Boat with Pattern, Disruption and Paint

When the German U-boats began their depredations, it became desperately necessary to provide some protective coloration for transports, food ships, and the hundreds of vessels that were carrying munitions to Europe.

Battleship gray having proved utterly useless, naval officers turned instinctively to artists for advice and assistance. If an artist, with his trained eye, knows how to apply color, knows how to trace lines on canvas so that they become the counterfeit presentment of the thing he sees, couldn’t he reverse the process and devise some way of blotting out the thing to be looked at?

It so happened that American artists interested themselves in devising schemes of protective coloration as soon as the U-boat began to sink on sight. The pioneers among them were William Andrew Mackay, Maximilian Toch, Gerome Brush, Everett L. Warner, and Lewis Herzog.

In the course of the war several American artists, noting the rapid development of land camouflage, became interested in its marine possibilities. William A. Mackay and Lewis Herzog, both of New York, appear to have been the pioneers of elaborate camouflage both of this country and abroad, although in 1917 attention was beginning to focus on this question simultaneously in many quarters. Gerome Brush, Maximilian Toch and Everett L. Warner soon entered the new field. Mr. Mackay even established a marine camouflage school in New York City, the first of its kind.