Two Sides of a Camouflaged Ship 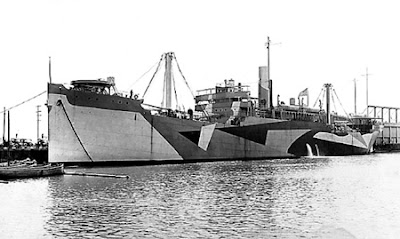 During World War I, it was standard practice in Allied ship camouflage to apply markedly different camouflage schemes to the two sides of any ship. Shown here for example are the port (top) and starboard (bottom) sides of an American freighter, the SS West Galoc, as photographed in 1918.
Posted by Roy R. Behrens at 10:43 AM 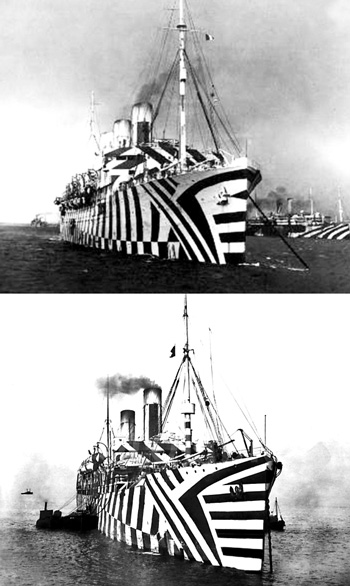 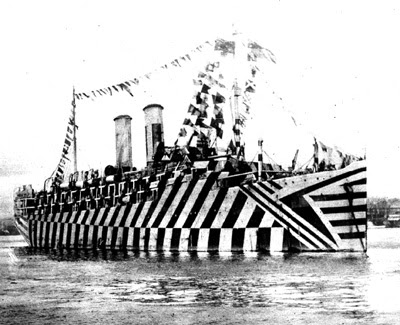 
For more than six years, documentary filmmaker Rick Beyer has been working on a film about a World War II secret US Army unit that specialized in deceiving the enemy on the battlefield, using inflatable decoys (tanks, trucks, jeeps and so on—including the phony tank shown here), sound effects,  misinformation, and other tricks. Officially known as the 23rd Headquarters Special Troops, they referred to themselves as the Ghost Army. Among its members were a number of people who later became well-known designers and artists, including Ellsworth Kelly, Bill Blass and Art Kane.

The film is nearly finished now. It's being screened at various locations around the country, and a trailer has been posted online. Click above to access that, and to learn about the screenings.
Posted by Roy R. Behrens at 11:56 AM


A card model-maker named Jerry Vondeling has produced printable pages (available online) of all the parts of a 1:1200 scale model of the HMT Olympic (sister ship of the Titanic), as it appeared during World War I, adorned in dazzle camouflage. The tiny (9-inch) model is pretty astonishing; and just the uncut cards themselves are wonderfully elegant layouts. Through the courtesy of Currell Graphics, you can download this and other free card models (of all sorts of things) as printable full-color pdfs at this webpage.
Posted by Roy R. Behrens at 4:46 PM

It is usually claimed that cubism began around 1907 in Paris, but it was not widely introduced to the American public until 1913, when an International Exhibition of Modern Art (known as the Armory Show) premiered in New York from February 15 to March 15, then traveled on to Boston and Chicago. On the day after its opening, a headline in the Magazine Section of the New York Times read “Cubists and Futurists Are Making Insanity Pay.” Cartoons and jokes about cubism became epidemic, as in this example by American artist John French Sloan (1871-1951), first published in 1913. Throughout World War I, cubism, futurism, vorticism and camouflage  (dazzle ship camouflage in particular) were said to be related, and were all commonly compared to crazy quilt patterns, harlequin outfits, aerial views of cultivated land forms, and the hallucinations of absinthe drinkers.
Posted by Roy R. Behrens at 8:40 AM 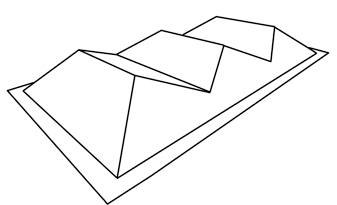 For many years, I've been interested in the paintings (as well as the writings) of British artist Patrick Hughes (1939-). As early as the mid-1960s, he began to paint perspective scenes (such as the one shown above, titled Vanishing Venice), not on flat canvases, but on odd-shaped board constructions, as shown in the line drawing above. In the process, he developed a method of painting he calls “reverspective.” In these mesmerizing paintings, features that appear to recede (visually) in space are in fact physically nearer. As a result, as you walk past one of them, it appears to move in astonishing ways (much as did the rotating trapezoid window that Adelbert Ames II invented in the 1950s). You have to experience this to believe it. Fortunately, there are online film clips as well as other notes about these bewildering images.

What does this have to do with camouflage? It has everything to do with a certain variety of disruptive camouflage, called dazzle painting, which was widely used in World War I for ship camouflage. Much as in Hughes' paintings, in dazzle-painted ships, certain surfaces appeared more distant when in fact they were physically closer. The intention was to interfere with the targeting calculations of the German U-boat gunners in their efforts to torpedo ships.

Hughes' paintings are visual paradoxes, a subject that has interested him since childhood. In fact, my first introduction to him was through his writing, not his art. I recall that the first of his books that I bought was Vicious, Circles and Infinity: A Panoply of Paradoxes (co-authored with George Brecht in 1975). In subsequent years, I also found Upon the Pun: Dual Meaning (1978), and More on Oxymoron (1984). Now, he has come out with a new, more comprehensive look at the same subject (a book I highly recommend) called Paradoxymoron: Foolish Wisdom in Words and Pictures (London: Reverspective Ltd, 2011).
Posted by Roy R. Behrens at 4:34 PM 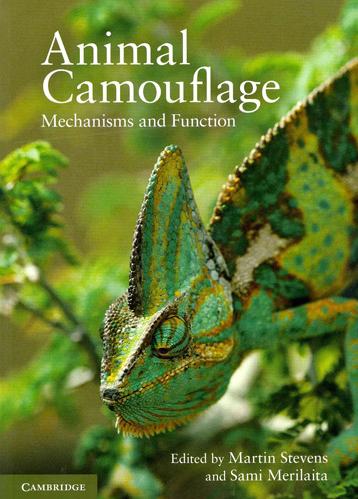 In recent years, Martin Stevens, Sami Merilaita, Roger Hanlon and dozens of other biologists have turned to empirical investigations of the appearance of animals, and especially what is commonly called "adaptive coloration" or natural camouflage.

Hanlon (at the Marine Biology Laboratory at Woods Hole MA) and his associates have focused on the extraordinary capabilities of cephalopods (octopus, squid and cuttlefish), which can rapidly change their appearance in complex, amazing ways—producing disguises beyond belief. There's a wonderful NOVA program about this research called Kings of Camouflage.

In the meantime, Stevens and Merilaita (biologists at the University of Cambridge and Abo Akademi University, respectively) have edited an anthology of recent studies related to this, titled Animal Camouflage: Mechanisms and Function (UK: Cambridge University Press, 2011). ISBN 978-0-521-15257-0. In the volume, there are seventeen papers on the widest range of aspects of adaptive coloration. It amounts to a fascinating survey of a rapidly expanding research area. As the only non-scientist to be represented, I was delighted to see the inclusion of my essay on "Nature's Artistry: Abbott H. Thayer's assertions about camouflage in art, war and nature."
Posted by Roy R. Behrens at 3:30 PM