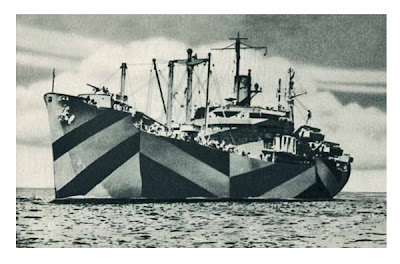 Above World War I-era photograph of a dazzle-painted ship. Public domain photo. The name of the ship is uncertain, but, based on other dazzle plans, it is most likely an American ship, wearing camouflage developed by a team of US Navy artists in Washington DC, headed by Everett L. Warner. At around the same time, the following short article, titled "Our Futurist Shipping," was published in The Independent (February 23, 1918), pp. 305-306—


If some ancient mariner were to return to one of our eastern ports these days he would think the shipping world had gone mad. The submarine has called forth the camouflage artist, and the camouflage artist has painted our transatlantic vessels with bizarre designs in all colors of the rainbow. Imaginative writers used to dwell on the kaleidoscope of shipping in great harbors like New York. The term is thereby applicable today, for our harbors are as colorful as operatic pageants. Half of some great ship will be painted a delicate baby blue and the other half will be an arrangement in great circles and stripes and bands in black, green, yellow and pink. Another vessel will appear dressed in a succession of waving colors ranging from pink to purple. A steamship no longer resembles a steamship. It looks like a futurist nightmare.

Thee are two rival schools of marine camouflage. One works on the theory of low visibility and the other one strives for what is called the dazzle effect. The low visibility camoufleurs painted the ships in waving lines with the basic light-ray tones—reds and greens and violets—with the idea of having the vessels merge with the atmosphere and disappear. The dazzle school goes in for a system of marvelous designs and colors calculated to confuse the aim of enemy gunners. Even our battleships have succumbed to the lure of strange pigmentation. The sober "fighting gray" battleship color is a thing of the past. Our fighting craft go to their grim business in the war zone made up like a Russian ballet.
Posted by Roy R. Behrens at 10:50 AM 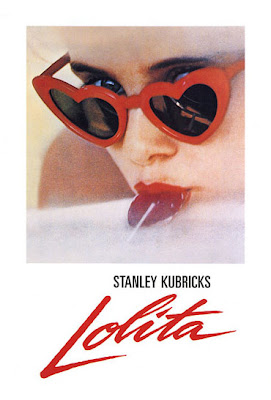 Believe it or not, there are references to two World War I camouflage artists in Vladimir Nabokov's famous novel, Lolita (New York: Knopf 1992), which was later made into a Hollywood film by Stanley Kubrick (reproduced here is  the film poster from 1997). On page 199, in a lament about Lolita's pictorial taste, the character Humbert Humbert mentions Iowa painter Grant Wood (an US Army camoufleur in WWI) and New England seascape painter Frederick Waugh (who was most likely the finest of the US naval camoufleurs). Here is what Humbert concludes about them—

For her birthday I bought her [Lolita] a bicycle, the doe-like and altogether charming machine already mentioned—and added to this a History of Modern American Painting…but my attempt to refine her pictorial taste was a failure; she wanted to know if the guy noon-napping on Doris Lee's hay was the father of the pseudo-voluptuous hoyden in the foreground, and could not understand why I said Grant Wood or Peter Hurd was good, and Reginald Marsh or Frederick Waugh awful.
Posted by Roy R. Behrens at 11:48 AM

From a review by Georgina Lewis of Roy R. Behrens, CAMOUPEDIA: A Compendium of Research on Art, Architecture and Camouflage, as published on the website of the Art Libraries Society of North America—

The visually arresting and culturally pertinent nature of camouflage make it an apt focus of contemporary art-making and research, with a lineage stretching back to the twisted forms and temporal language of cubism and the post-Darwinian fascination with animals and their markings. Into this arena emerges Camoupedia, containing a vast number of concise, well-researched, and engaging entries on subjects pertaining to camouflage. Many are a paragraph long which makes the work highly readable and permits the inclusion of a wide range of topics.…It will appeal to art and cultural historians as well as to artists who will find within it many points of inspiration. More…
Posted by Roy R. Behrens at 10:42 AM 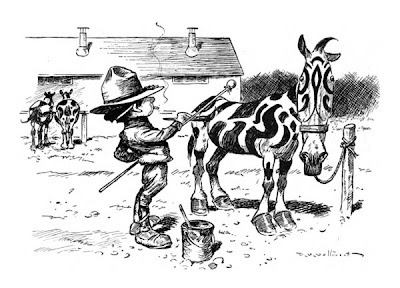 Above A cartoon spoof of World War I camouflage from Life magazine (1918). The caption reads: "The Camouflaged Steed: I've often heard of the horrors of war, but I never expected to be one." Artist unknown. Compare it with this passage from Jane Toombs, Nightingale Man. Amherst Junction WI: Hard Shell Word Factory, 2002, p. 40—


"Would you take a gander at that, Alfie," Sid said. "She's painted all in stripes like a brown and green zebra."
"Camouflage, Sid. I read about it. The U-boats can't see her good when a ship's been camouflaged. It's supposed to make them look like clouds or something."
Posted by Roy R. Behrens at 8:48 AM


We were recently in Ottawa to speak at the Canadian War Museum, in connection with the current exhibition called Camouflage: From Battlefield to Catwalk. It continues through September 6, 2010, and is undoubtedly well worth the visit. Among the things exhibited is the August 3, 1918 issue of a magazine called The Sphere, which includes a full-color reproduction (pp. 86-87) of a World War I painting (by an artist named S. Ugo) of British soldiers applying disruptive camouflage to the surface of a cannon.

On the same day, we toured the other, permanent exhibits in the War Museum, including a basement section in which scores of tanks, trucks, cannon and so on are housed. Among the various artifacts there was a WWI camouflaged wagon (shown below), which, we were told, was the bottom half of a mobile observation post. 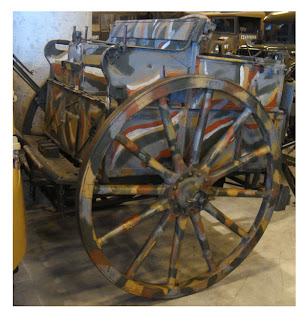