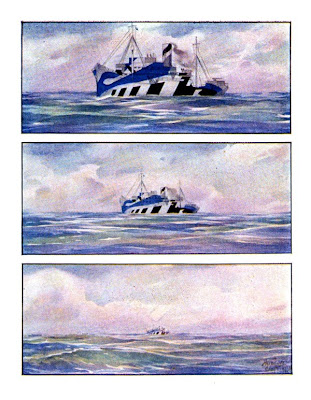 Above These three watercolor paintings (with no credit to the artist, and the signature at bottom right is unreadable) were published as the frontispiece in George A. Hoadley, Essentials of Physics. Revised edition. American Book Company, 1921. The caption is headed "A Ship Illustrating the 'Dazzle' System of Camouflage," followed by: The pictures show the same ship, headed in the same direction, but a three different distances. When seen as a great distance, especially through the periscope of a submarine, the ship appears to be headed in a direction quite different from its actual course, because of the false perspective design painted on it. In the remainder of the book, there's only one brief mention of camouflage (p. 481).

During World War I, having recently been introduced, by way of the Armory Show, to Cubism, Futurism and other forms of Modernism , the public was amazed (delighted, shocked, offended) by the use of blatantly colorful shapes for ship camouflage. Publications from that time are filled with outspoken eyewitness reports of what it was like to see a fleet of dazzle-camouflaged ships. For example, this is from American writer Arthur Stanley Riggs' With Three Armies On and Behind the Western Front. Indianapolis: Bobbs-Merrill, 1918, pp. 17-18—


The ship herself was not painted a uniform war gray but with a bluish-gray as a background, she was literally covered, hull, superstructure, funnels, spars, boats, everything with bilious green and red-lead squares, set diamondwise—camouflage at sea [this is probably in reference to the Cunard ocean liner, the RMS Mauretania]. When coming aboard a young airplane engine expert, with the rank of a Lieutenant-Commander of the Royal Naval Reserve, shivered at this hideous pleasantry, and all the way across missed meals and kept away from the bluest part of the smoking room.
Here's another disgruntled report from an American "war essayist," S.J. Duncan-Clark from "The Impressions of a Landlubber" in The Recruit: A Pictorial Naval Magazine. Vol. 5. Great Lakes Athletic Association, 1919—


I traveled across the Atlantic on the Adriatic, one of a fleet of twelve transports carrying 30,000 American soldiers. They were all British ships, but they had an American convoy for the greater part of the voyage. We steamed out of New York harbor with four destroyers acting as our guard, two on either side, and a cruiser leading the way.
Every merchant ship was camouflaged. Imagine a lunatic cubist painter turned loose with three brushes and a pot each of black, white and blue paint, and the results would be much like those that were visible to us on the hulls of our sister ships.
And a third report from the same time period, in British clergyman William James Dawson's The Father of a Soldier. John Lane Company, 1918, p. 11—


I have just returned from the Docks, and have seen my son off for his third trip to the trenches.
Beside the landing stage lay a ship strangely camouflaged, as if a company of cubist artists had been at work upon her. She looked like an old lady of sober habits, who had been caught in the madness of carnival, and dressed as a zany. She was adorned—or disfigured—by stripes of color that ran in all directions, splashings of green, splotches of gray, curves of dull red, all mixed in uttermost confusion and with no discernible design. I was told that this extraordinary appearance was designed to give the ship invisibility: thus clothed she would flee like a ghost over the gray perilous waters, a phantom thing of blurred outlines, as if evoked from the waters themselves.
Posted by Roy R. Behrens at 8:07 AM 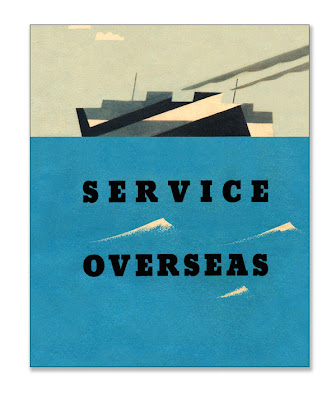 Above This World War II-era British government publication features a powerful abstracted image of a dazzle-camouflaged ship. The designer is unidentified but the style is undoubtedly similar to earlier Vorticist works by Edward Wadsworth and Edward McKnight Kauffer. Notice the visual connections set up (through recurrent angles, aligned edges and correlated column widths) between the ship's camouflage pattern and its two strands of smoke.

Below is a published eyewitness account from World War I of what it was like to be part of a transatlantic trip aboard a dazzle-camouflaged steamer, accompanied by other camouflaged ships. It is extracted from an article titled "Over the Bounding Main in War Time" by William Charles O'Donnell, Jr., who was the Editor in France for Educational Foundations (Vol 30 No 3 December-January 1918-1919, pp. 133-137)—


I am thinking now of the incidents of the trans-Atlantic trip to Europe in the month of December 1917, and of the return voyage in the month of May 1918. The first queer sensation came as I tried to appreciate the subtle artistry displayed in the splashings of color and contortions of design on the sides of our steamer and on the other vessels similarly decorated. Camouflage, I believe, is a French theatrical expression. When an actor puts on his wig, elongates his nose, paints his cheeks, and accentuates his eyebrows for the purpose of blending his individuality with that of the character he is to represent before the footlights, he is the original camouflager, if the word may be so anglicized. So the great ships are made up for their part in the world's mighty drama of war. The effect is often weird, and startling. This nautical costuming seems often to reflect more of the spirit of comedy than of heavy tragedy. One does not have to wait until he is on the rolling waves to get the sensation for which ocean travel is famous. Concentration for a minute or two on the attempt to discover the elements of art in these grotesque displays, the geometric values in those wild configurations is enough to produce the brain whirl and the other disturbances supposed to be symptomatic of ocean sickness. The only cue is to close the eyes, to disengage the mind from the occupation, and to wait for the earth's returning to its orbit. Yet, we are assured that there is a discoverable scientific principle upon which the whole process is established. I have read somewhere of the French artist whose observation of the birds in their flight led him to a careful study of color combinations that produced the effect of invisibility. At short distance the black-backed bird with white breast, for instance, quickly becomes but a thin black line against the background of the sky. At a little distance the black line itself becomes invisible. A similar effect can be obtained with a ship at sea if a similar contiguity of variation in the colorings of its exterior decorations is effected. Especially as these ships are tumbling amid the waves at sea it is difficult to judge of their size or to know whether they are coming or going. By frequently veering its course the camouflaged ship is a puzzle to the submarine. Especially is this true of the small vessels, such as the torpedo boat destroyers, which have done such valiant work as convoys for transports and ocean steamers. I have watched these little heroes of the deep cutting into the foaming billows when it seemed as though they were entirely submerged and would never appear on the surface again. I have seen them when it was difficult to believe that they were more than half their real size. I remember watching one of our convoys one morning when it was utterly impossible to see the center of the boat at all. Just a small portion of the bow and about an equal portion of the stern was all that could be discerned. At times it seemed as though I must be looking at bits of wreckage being thrown from wave to wave. So fantastic as these decorations seem to be they are the application of an old science newly developed which has contributed largely to the success of the Allies.
Posted by Roy R. Behrens at 8:38 AM 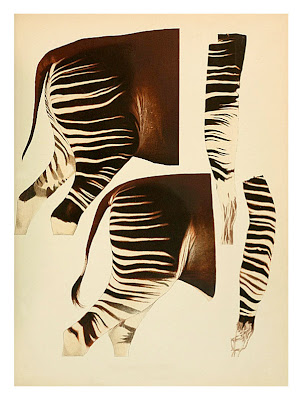 Above The stripes of an okapi from E. Ray Lankester, Monograph of the Okapi (London: British Museum, 1910). Illustrations by Carl Hentschel. The okapi, native to the Ituri Rainforest of the Congo, are giraffe-related mammals with remarkable striped patterns on their forelegs, back legs, and hindquarters, not unlike the stripes of a zebra. It brings to mind the patterns both employed and praised within Gerard Manley Hopkins' masterful poem, "Pied Beauty"—


Glory be to God for dappled things—
For skies of couple-color as a brinded cow;
For rose-moles all in stipple upon trout that swim;
Fresh-firecoal chestnut-falls; finches' wings;
Landscape plotted and pieced—fold, fallow, and plough;
And all trades, their gear and tackle and trim.
All things counter, original, spare, strange;
Whatever is fickle, freckled (who knows how?)
With swift, slow; sweet, sour; adazzle, dim;
He fathers-forth whose beauty is past change;
Praise him.
Posted by Roy R. Behrens at 10:33 AM 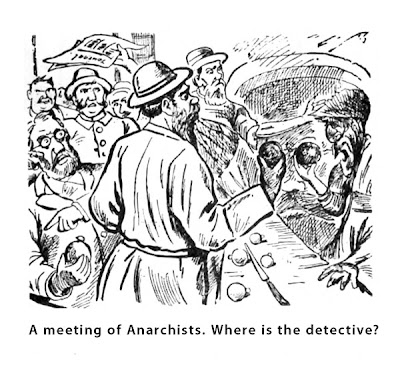 Above An embedded figure drawing from a 1907 issue of The Strand Magazine. Compare that with this observation by Gestalt psychologist Wolfgang Köhler, from his Gestalt Psychology (NY: Liveright, 1947), pp. 92-93—

…sometimes we see from a distance a strange object which later, when we approach it, splits into a well-known thing and parts of other objects… The puzzle-pictures which years ago amused the readers of magazines were examples of this kind of thing. In modern wars it has become a real art to make objects such as guns, cars, boats, etc., disappear by painting upon these things irregular designs, the parts of which are likely to form units with parts of their environment.
Or this from Annie Dillard, Pilgrim at Tinker Creek (NY: Bantam 1975), p. 18—


Nature is like one of those line drawings of a tree that are puzzles for children. Can you find hidden in the leaves a duck, a house, a boy, a bucket, a zebra, and a boot?
This drawing shown here is reminiscent of a double-image painting by Salvador Dali (two nuns who suggest the shape of Robert Houdin's bust of Voltaire), who remembered his interest in puzzles in his article titled "Total Camouflage for Total War" in Esquire Vol 18 No 2 (August 1942), pp. 64-66, 129-130—

Every Saturday [as a child] I received a juvenile publication to which my father had subscribed for me. Its final page was always devoted to a puzzle picture. This would present, for instance, a forest and a hunter. In the tangled underbrush of the forest the artist had cleverly concealed a rabbit; the problem was to find it. Or, again, a doll must be discovered, lost by a child in an apparently empty room. My father would bring me the puzzle, and what was his astonishment to see me find, not one but two, three or four rabbits, not a single doll but several—and never the one which the artist had meant to conceal.
Posted by Roy R. Behrens at 8:09 AM