Above Last year we were asked to serve as a consultant (fact-checker on the booklet text) in the development of a new boxed game called Dazzleship Battleships, the cover of which is reproduced here. Produced by Laurence King, it has recently been published. The container cover, the open box and some of its components are shown below. 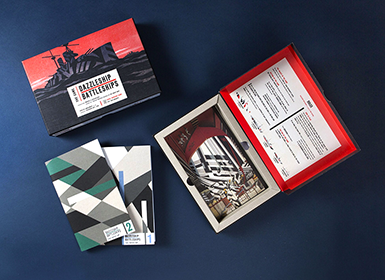 Among the inside components is a brief illustrated overview of the method and the rationale for World War I ship camouflage, called dazzle-painting.

A spread from the booklet is shown below. Overall, what a wonderful package design. A beautiful object, game or none. Collectors of exquisite graphic design will love it. 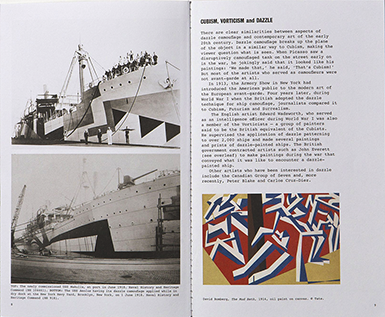 Above Above is a colorized version of a 1918 photograph of H.L. Messmore, a prominent supplier of components for amusement parks, carnivals and expositions. For example, he contributed to the Panama Exposition in San Francisco, the Chicago World’s Fair, the Golden Gate Exposition and the New York World’s Fair. He was a partner in Messmore and Damon, which his brother George established in 1914. It was H.L. who built the Electric Park in Detroit in 1907, and also served as manager of Luna Park at Coney Island.

During World War I, H.L. Messmore appears to have shared with the army his expertise in making papier mâché and plaster figures. In this photograph, he is inspecting an unpainted dummy of a soldier, to which he is about to add sculpted binoculars. The caption on the black and white photograph (which is available online at the National Archives and Records Administration website) states that “after use in this country in the Liberty Loan Campaign, [it] will be placed in a trench in France as a dummy target.”

In earlier posts, we’ve talked about such uses of plaster and papier mâche dummies during WWI. Since horse carcasses were a common feature at the front, hollowed-out dummy horses might be used as observation posts. An instructional example (in this case, it appears to be a clay model) is shown below, both front and back, including the rough-hewn shape of a soldier inside.

When I was an art student in the 1960s, I thought papier mâché was a non-durable technique used only by hobbyists and amateurs. But I learned from one of my painting teachers that it was highly durable and had been used very seriously in building all sorts of astonishing things. In particular, he showed me a functional lute that he had made using papier mâché. I was amazed, since it looked and felt identical to a lute made out of wood. He also built highly detailed, elaborate marionettes from the same materials.

During WWI, one of the people who made an effort to extend the use of papier mâché for military purposes was a man named Arthur B. Jensen (1899-1987), who was Danish-born (apparently) and lived in the vicinity of Rockford IL. While serving in the US Army Reserves, he was the senior instructor in the Camouflage Department of the Blackhawk Division, which was initially stationed at Camp Grant IL, near Rockford. At the end of the war, he published a book on the use of plaster and papier mâché for modeling, titled Jensen System of Modeling: Employing the Superskill Modeling Device (1919). As he explains and illustrates, while stationed at Camp Grant, he and other soldiers made a 25-foot high statue of Blackhawk (the Native American leader), constructed of waterproofed plaster and papier mâché. Reproduced below is the title spread of Jensen’s book, and a photograph of the statue he made.

The following is an excerpt from Jensen’s book (pp. 3-4)—

Plaste papier modeling has a glorious past. The US Army used this method in the World War for making dummies to attract enemy fire and so learn their location, and in many other ways. In several instances, a dead horse lying on No-Man's Land near the enemy trench was replaced by a good duplicate made in plaste papier, and the observer would crawl into the paper horse before dawn each day and observe the enemy's action all day at close range. Great guns were imitated in this material and placed in the vicinity of real guns that were carefully concealed through camouflage. The Boche [German] observers sent out to discover the location of the real batteries that were doing the havoc to the enemy would discover the paper guns only, and so the enemy artillery would train their fire on the dummy batteries and allow the real guns to continue their fire without being molested. The real guns were concealed by having their outlines painted out by means of broken forms of various colors painted all over the guns, and also covering the guns with foliage. A great statue of Blackhawk, 25 feet high,was modeled in this material and waterproofed, just before the Blackhawk Division left Camp Grant IL, for France in July 1918. This work was done by the Blackhawk Division's Camouflage Department, of which the writer was a member. It still stands, after these many months, defying the elements; the winds and rains and snows could not destroy it; and it still looks as permanent as though carved out of solid rock.

[Added March 22, 2017] Since our original post of this page, we've discovered a related article in the March 1920 issue of Boy's Life magazine, titled "The Use of Plaste Papier in the War" (p. 55), including the following excerpt—

Plaste papier is really nothing more than wrapping paper dipped in plaste, which makes it plastic and pliable while the artist is modeling with it, and very hard and rigid after it dries.  It was very light, being modeled as a hollow shell, and so could be carried about near the fornt line trenches easily.

To make this substance even more easily handled, Lieutenant A[rthur] B. Jensen has invented a superskill modeling device, which consists of aluminum strips which describe the important lines of the head, neck and shoulders of a man and woman. This device enables anyone to secure the correct lines and proportions of the head, without interfering in the slightest with the modeler's originality. On the same frame one can model the head of President Wilson, a portrait of himself, the bust of Venus de Milo, or any other subject.
Posted by Roy R. Behrens at 7:01 PM