The gift of seeing resemblances

Camouflage and mimicry are predicated on concepts of simulation and resemblance, and the desire to produce and discern likeness is ingrained in human experience. In his 1933 essay, “On the Mimetic Faculty“ Walter Benjamin aligned mimetic imitation, or mimicry, with all of the “higher functions” of humanity, and pointed to a time when the “law of similarity” governed life, ruling both “microcosm and macrocosm.” Benjamin conceived of mimesis as a powerful impulse, and a desire to assimilate the self into the other, a social practice, as a foundation for art and language, stating, “nature creates similarities. One need only think of mimicry. The highest capacity for producing similarities, however, is man’s. His gift of seeing resemblances is nothing other than a rudiment of the powerful compulsion in former times to become and behave like something else. Perhaps there is none of his higher functions in which his mimetic faculty does not play a decisive role.”

RELATED LINKS
The Living Photographs of Mole and Thomas
Mimicry, Metaphor, and Mistake
Embedded Figures in Art, Architecture and Design
Khaki to Khaki (dust to dust): The ubiquity of camouflage in human experience
Sitemap

Reproduced below is an extremely rare photograph of a small team of US Navy ship camouflage artists during World War II. In the center foreground, holding a ship model, is Everett Longley Warner, who was the Chief Civilian Aid in charge of ship camouflage. Warner had served in a similar capacity during World War I. The person in the top left background is unidentified, but the remaining five staff members are (l to r) Bennet Buck, Sheffield Kagy, William Walters, Arthur Conrad, and Robert R. Hays. It was Hays who provided a scan of this photograph when we corresponded with him in the 1990s. 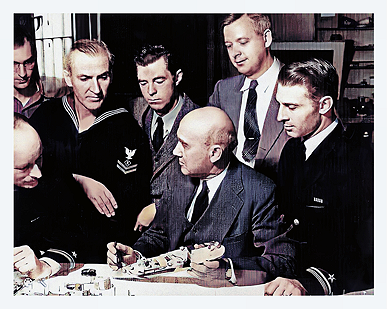 In researching naval camouflage, I have typically emphasized WWI, largely because, as an artist and designer, it is far more intriguing to me than WWII, and, more generally, because I am less interested in military technology than in parallel form developments in camouflage (natural and military) and Modern-era art and design.

Related to that, it has always puzzled me to find that, when I speak to audiences about WWI dazzle ship camouflage, a common response is for people to say that such “high difference” confusion patterns must only have been used in WWI, because (or so they assume) non-visual means of detection (such as radar) were predominant during WWII.

Yet, if I look through my archive of ship camouflage photographs (see examples of WWII below, c1944-45), I easily have as many or more examples of “disruptively patterned” ships from WWII as I have from WWI. An additional consideration is that the same person (Everett L. Warner, as noted above) was responsible for ship camouflage in both World Wars.

This is not to say that pattern disruption in WWI and WWII were the same. They were not. As I tried to explain in an earlier published essay, titled Disruption versus Dazzle: Prevalent Misunderstandings about World War I Ship Camouflage (2018), disruptive patterns were still widely used in WWII, but with an important distinction.

WWII ship camouflage was no longer addressed solely or primarily to the viewpoint of a U-boat periscope, but to multiple observation points, such as the view from the deck of a ship, or from an airplane’s overhead view. As a result, as shown by WWII ship camouflage plans, it became essential to apply disruptive patterns to the horizontal surfaces of a ship, surfaces that would not have been visible during WWI from the viewpoint of a German submarine.

Unless I’m mistaken, this issue has largely been ignored by others who research the subject. But there is at least one exception. It is discussed in an online paper titled Naval Camouflage and its Application on HMC Ships REGINA and MONCTON: A Brief History, published in March 2020. Its author, Timothy Choi, is a doctoral candidate at the University of Calgary’s Centre for Military, Security and Strategic Studies.

Khaki to Khaki (dust to dust): The ubiquity of camouflage in human experience

In recent weeks, we've been very fortunate to have found out about the dazzle ship camouflage images of a Washington DC-area graphic designer and toy-maker named Steve Morris. He has recently been "translating" World War I ship camouflage plans into wonderfully crisp, diagrammatic ship images, with the intent of replicating the original color schemes as closely as possible. Three examples are shown below, but you can access others online here. Earlier, he also created a series of ship camouflage icons, which are available online here. 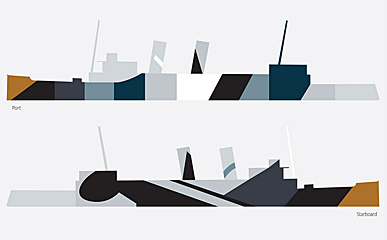 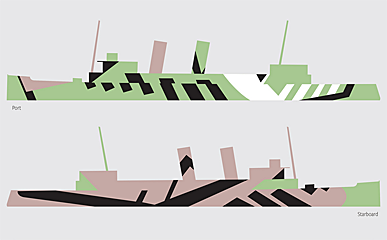 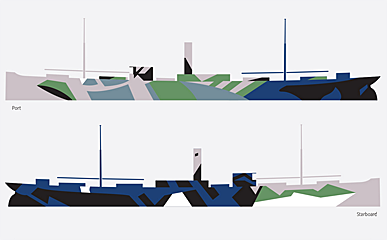