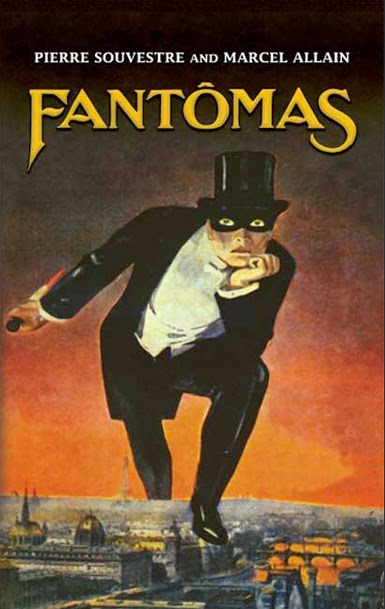 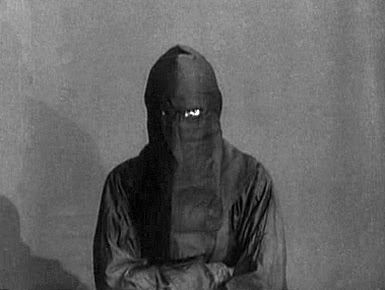 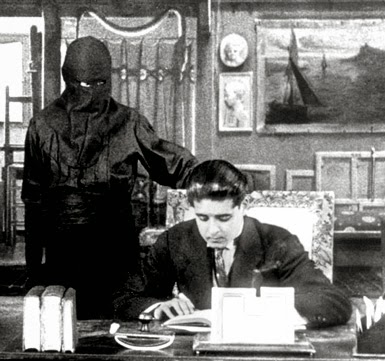 Thanks to camouflage scholar Claudia Covert at the Fleet Library at the Rhode Island School of Design, we are now aware of the work of an American illustrator named Albert (Wilfred) Barbelle (1887-1957). It was Claudia who alerted us to an illustration by Barbelle of a dazzle-painted World War I ship on the cover of the music for Down the Lane and Home Again (1919), reproduced above. In the 1930s, he drew the lead character for the first Walt Disney book about Mickey Mouse. Beyond that, we've since located a sheet music cover by Barbelle (for Baby's Prayer Will Soon Be Answered (c1919)) in which he again includes a dazzle-camouflaged ship (shown here).


Pertinent to ship camouflage (if not to Barbelle) we have also happened upon the sheet music for a Camouflage One Step (1917), for which the illustrator was Roger de Valerio (1886-1951), a prolific French designer who created more than 2,000 sheet music covers.

As you may recall, one of our earlier posts featured yet another example of camouflage-themed sheet music for Camouflage: A Soldier's Song (1918).

Above Two views of a World War I dazzle-camouflaged ship, the SS Matilda Weems, as photographed on 23 August 1918. Sixth Naval District. Designs on the starboard (top) and port sides (bottom) differ remarkably. From photographs in the US National Archives and Records Administration (NARA). Items 6925070 and 6925071.

Camouflage is the creation of aesthetes, not military tacticians. In fact, ever since the first purpose-designed camouflage of the First World War, hardened fighting men have gone into battle wearing patterns dreamed up by artists who considered them rather gorgeous.
Posted by Roy R. Behrens at 12:56 PM

We've discovered something rather odd. It's an unusual painting in the collection of the National Archives and Records Administration (NARA). It is undated (but presumably goes back to 1917) but bears the very clear signature of Philip Little, Salem, Mass. The most curious thing about it is foretold by its title: Battleship camouflaged as "An Island." This is followed by a note that reads: Canvas screens painted appropriately would be used, as in some foreign service. Boston Navy Yard. Zooming in on it on screen, it becomes apparent that the painting was made on the surface of a line drawing (or diagram) of an "outboard profile" of a World War I-era ship, identified as the USS Delaware, an American dreadnought battleship. Shown below is a close-up of a detail of this behemoth dressed up as an island, while above are three other views, including the entire painting, the artist's signature, and the label that's glued to the surface. Odd indeed.

So who was Philip Little (1857-1942), and how and when was he involved in ship camouflage? There is no shortage of sources, online and otherwise. In the Boston Sunday Globe (September 9, 1917, p. 38), there is a news article by (Globe art critic) A.J. Philpott titled IN CAMOUFLAGE WAR MAKING DECEPTION INTO A FINE ART. It's a substantial article, near the end of which there is this note—

Philip Little, the Salem artist, who paints both landscapes and marines and who is one of the foremost painters in the country, recently experimented with camouflage on a boat with very remarkable success. It is men of his stamp who should be called on for service in this new emergency.

This may be in reference to Little's proposal (above) to disguise a battleship as an island, or it may refer instead to his other attempts at ship camouflage. In an unpublished and undated typescript by US Navy camoufleur Everett L. Warner ("Summary of Points to be Made in a General Lecture on Marine Camouflage") states that two photographs of camouflage schemes, designed by Little, were forwarded to him by the Boston Navy Yard on January 10, 1918. According to Navy records, the photographs (of the USS Yacona and the USS Aztec, both shown below) were taken on December 20, 1917. Clearly, these are not examples of island mimicry, but appear instead to fall between the "low visibility" (or optical mixture) experiments of muralist William Andrew Mackay (inspired by the findings of physicist Ogden Rood) and various "disruption" schemes. 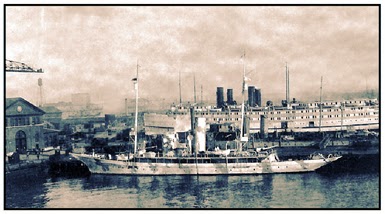 It is always interesting to hear from UK ship modeler Jim Baumann who sends us links to amazing World War I ship models, as well as vintage photographs of dazzle-painted ships from the same era. Recently he shared a link to a wonderful model by Hou Wenchang of the HMT Olympic (1918). Be sure to zoom in on the detailed close-up images on the left side of the page. And above is an unusual photograph of two exquisitely-camouflaged ships, either British or American.

Years ago, we ran across a news photograph (above), with a note explaining that, after World War I, unemployed British navy veterans were given jobs as servers on mobile café buses. As a reminder to the public, these buses were painted in striped ship camouflage patterns. Last week, we found a brief news article in the La Porte City (IA) Progress Review (dated June 15, 1933, p. 9) with a headline that reads CAFÉ BUSES CATER TO MOTORIST TRADE. Part of the rest of the article reads—

Traveling cafes on British roads are the latest development in catering for motorists, says Answers Magazine. A scheme for a fleet of these has been worked out as a means of providing employment for retired naval officers.

These traveling cafes are really super coffee stalls, fitted out with the most up-to-date equipment for providing refreshment for hungry wayfarers. The first of them are already on the road and may be recognized by their blue and white exteriors, in the style of the wartime "dazzle" camouflage for merchant ships. 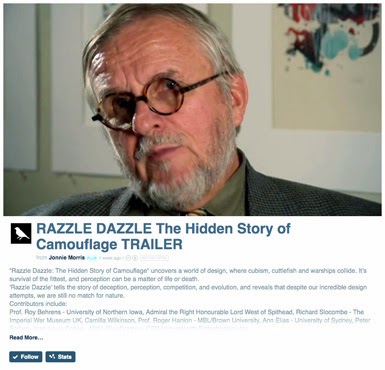 Author and designer Roy R. Behrens is interviewed in a new trailer (just posted) of Jonnie Morris' upcoming documentary on RAZZLE DAZZLE: The Hidden Story of Camouflage. The new graphics, pacing and editing are dazzling in and of themselves.