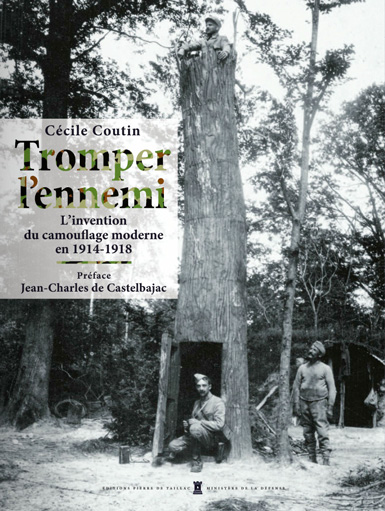 Today we ordered a copy (sight unseen) of a recent book (the text is completely in French) by French art historian Cécile Coutin, titled Tromper l'ennemi: L'invention du camouflage moderne en 1914-1918. Paris: Éditions Pierre de Taillac, 2012, 240 pp. Coutin, who is the chief conservator at the Bibliothèque nationale de France (BnF), has researched art and camouflage for many years. Her earlier findings were published in a three-part article titled "Les Artistes de La Guerre: Le Camouflage Pendant La Première Guerre Mondiale" in Historiens-Géographes. Nos 321 (December 1988) and 322 (March-April 1989). This new book (which again, I haven't actually seen) appears to be the grand result of her patient pursuit of this subject. It is illustrated by 300 drawings, paintings, photographs and other documents from historic archives. The cover, reproduced above, shows three French soldiers (presumably camoufleurs) testing a steel-lined artificial tree (constructed in sections, with a ladder inside), used as a battlefield observation post. Other portions of the book can be viewed online here.
Posted by Roy R. Behrens at 2:19 PM


Above This is the most amazing photograph of a famous example of World War I dazzle ship camouflage. It's a US Signal Corps photograph of the British SS Mauretania (sister ship of the Lusitania), a 31,938-ton Cunard ship after its arrival at New York harbor on December 1, 1918. It was bringing home from France 5,000 American troops, among them 1,100 wounded.
...
Last October, we (at the University of Northern Iowa) excitedly looked forward to a visiting lecture on our campus by Claudia Covert, a research scholar and Readers' Services Librarian at the Fleet Library at the Rhode Island School of Design. Regrettably, Hurricane Sandy decided to visit Providence that same week, with the result that the lecture had to be rescheduled. It will now take place later this month, at 11:00 am on Saturday, April 27, 2012, in Room 111 of the Kamerick Art Building.

Her talk will be one of two keynote events, along with other presentations and panels, that are part of a two-day symposium at UNI called ENVISIONING DESIGN: Education, Culture, Practice. The gathering (which is free and open to the public) begins at 5:00 pm on Friday, April 26, and concludes at 4:00 pm the following day. A detailed schedule of events is now available online here.

Claudia Covert's lecture is a richly illustrated presentation on the bizarre, colorful camouflage patterns applied to Allied ships in World War I. RISD has a collection of 455 color lithographic plans of "dazzle camouflage" ship designs, which she has extensively researched and written about. In her presentation, she will talk about her findings, the function of this odd approach to camouflage, and the role of designers and artists in devising these deceptive schemes.

[By the way, from 4:00 pm Friday through Sunday, parking is open on campus.]