I feel very fortunate to have been able to contribute the introduction to the full-color catalog for a current exhibition about the camouflage-related work of American painter Abbott Handerson Thayer (1849-1921). The richly-illustrated catalog, titled Abbott Handerson Thayer: A Beautiful Law of Nature, has just been published by Gold Leaf Studios in Washington DC, and can now be purchased online, either as a printed softbound book or a pdf download. It was edited and designed by Ari Post who is the Project and Exhibits Manager at Gold Leaf Studios.

Inside its pages are nearly fifty reproductions of rarely-seen art works and other artifacts by Thayer, whose research of animal coloration led to his popular designation (in news accounts) as the "father of camouflage." In 1949, his family gave to the Smithsonian Institution about one hundred items, many of which were his experimental studies of both natural and military camouflage. Fortunately, these priceless research artifacts have survived all these years, but the majority of them have never been exhibited publicly nor even reproduced in books. As the examples in this catalog show, this seemingly small exhibition is in truth a potentially major event. And it's something we can all share, because the current exhibition is at the National Sporting Library and Museum in Middleburg VA, a short drive from the nation's capital. The exhibit opened recently, on February 1, and continues through May 26, 2013.


In addition to my introduction, the catalog also offers an insightful discussion of Thayer as an observer of nature by a prominent British zoologist, Martin Stevens (recently co-editor of a pivotal book, titled Animal Camouflage: Mechanisms and Function), and a thoughtful essay on Thayer's work as an artist and its significance by art historian William Kloss, a well-known authority on European and American art.


There are several other sections of equal fascination (also written by Ari Post), including one on Thayer's grasp of the "laws of nature," his attempts to design military camouflage (both soldiers' uniforms and disruptive ship camouflage), his insatiable interest in the appearance of animals, and (appropriately, given the role of Gold Leaf Studios in enabling this event) the principles by which exquisitely suitable frames are designed for the paintings of someone of Thayer's achievement.

Some time ago, in earlier posts, we featured the amazing work of two ship modelers, Jim Baumann (from the UK) and Wolfgang Kring (from Germany). They have since supplied us with other examples of models bearing camouflage. Above (bottom) is a photo of the port side of Baumann's model of the HMS Furious, as dazzle-painted during World War I. Above that is a contemporaneous photograph of the opposite side of the same ship. Although there are some color photographs from those years and even before, there are no color photographs of camouflaged ships.

The photos below are details of a model by Wolfgang Kring of a bizarre WWII camouflage plan that was applied to the German battleship the Tirpitz while it was being fitted out at the Kriegsmarine Werft, at Wilhelmshaven, Germany (c1939). Positioned in front of a section of buildings, the ship's camouflage was an attempt at mimicry—it was painted to resemble the brick walls, windows, doors and other features of the buildings behind it. 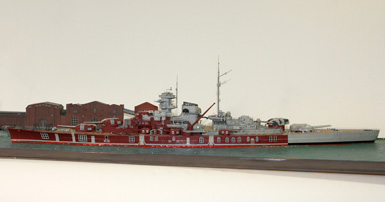 Gerome Brush (informally referred to as “Gerry” or “Jerry”) was born in New York on March 11, 1888. His father was a well-known American painter, George de Forest Brush, while his mother, Mittie Taylor Brush, was a sculptor, inventor and pioneering aviator. He is sometimes mistakenly cited as “Jerome” Brush, but his actual name was Gerome, a tribute to French painter Jean-Léon Gérome, his father’s famous teacher at the Écoles des Beaux-Arts.

Much of what is known about Brush and his family members, as well as others who were part of the artists colony in Dublin, New Hamphire (where the family spent their summers), is due to the efforts of his sister, Nancy Douglas Bowditch (née Nancy Brush), who wrote a memoir of her father, titled George de Forest Brush: Recollections of a Joyous Painter (1970). Later, she also donated her papers to the Archives of American Art, including two interviews in which she talked at length about her parents, her siblings, friends and others.

Gerome Brush learned about painting and sculpture from his father, and by working with others in Europe and the US. Among his early influences was the painter Abbott Handerson Thayer, who was a lifelong friend of his father, as well as their neighbor in Dublin. Although somewhat younger, Gerome was in close contact with other young artists who studied and lived in the vicinity of Dublin, Keene and Cornish (location of the studio of Augustus Saint-Gaudens), New Hampshire, among them muralist Barry Faulkner, sculptor Sherry Edmundson Fry, and painter-naturalist Gerald Thayer (Abbott Thayer’s son). Bird artist and naturalist Louis Agassiz Fuertes (a Thayer student and devotee) was a frequent and favorite visitor to the Brush family’s summer home.

In Dublin, among the Brushes’ neighbors was Samuel Clemens (Mark Twain), whose youngest daughter Jean was prone to terrible seizures. Among Jean Clemens’ closest friends was Nancy Brush, and entries from Jean’s diary from 1906 confirm her romantic interest in Gerome Brush. But nothing came of it, and three years later, while no longer living in Dublin, Jean died, apparently during a seizure, while taking a bath.

In the early 1890s, Abbott Thayer had begun to write about the survival advantage of protective coloration (or animal camouflage), and in 1898, coincident with the Spanish-American War, he and George de Forest Brush approached the US Navy with a proposal for camouflaging ships. Apparently precocious, the young Gerome Brush was also involved in this research, and in 1902, at the age of only fourteen, he and Abbott Thayer were jointly granted a patent for a “Process of Treating the Outside of Ships, etc., For Making Them Less Visible” (U.S. Patent No. 715013). The Spanish-American War having ended in 1898, the same year it began, there was no on-going conflict, and camouflage was not an urgent concern.

In 1913, Gerome Brush married a New York actress named Louise Seymour. According to his sister Nancy, Gerome “who was beginning to make a name for himself as a sculptor, had also become interested in working at a settlement house there [in New York]—coaching boys in a dramatic club—and thus he met Louise, who was occupied in the same work.” In celebration of the marriage, Gerome’s parents took the newlywed couple and the Brushes’ several daughters (with the exception of Nancy) to Europe for an extended visit, and particularly to Florence, Italy. They left in November 1913 and lived overseas for nearly a year, but they had to return to the US in October 1914, because of the increasing dangers of World War I.

On their return voyage, among their fellow passengers (according to Nancy Brush) “were Enrico Caruso and some of the Metropolitan Opera Company. They were full of fun and kept all the others so entertained that they didn’t have time to think about the danger [of being attacked]. They sang and played tricks on each other and had games together like so many gay children. One day Mother [Mittie Taylor Brush] looked up in surprise at her cabin window to see peering in at her the beaming face of Caruso with a lady’s hat on.

The following month, the New York Times reported that the great Caruso had dropped in at the Knoedler Galleries, to purchase an exquisite portrait that Gerome Brush had painted of his beautiful wife Louise.

It was not until 1917 that the US entered World War I, joining the side of the Allies. Given the astonishing success with which British ships were being sunk by German submarines (called U-boats), the question of making Allied merchant ships less visible (or at least harder to target) became a paramount issue. American artists and others were encouraged to submit proposals for ship camouflage, and Gerome Brush was among those who responded.

In late 1917, the US Navy (working with the US Shipping Board, Emergency Fleet Corporation) officially gave its approval to six ship camouflage systems, named after their originators, including (artists) Gerome Brush, William Andrew MacKay, Lewis Herzog, Everett L. Warner, F.M. Watson, and (chemist) Maximillian Toch. For the rest of the war, according to Nancy Brush, her brother Gerome (along with other artists) was involved in supervising “the painting of merchant ships all along the eastern seaboard. He worked at Norfolk, Virginia, Boston Harbor, New York Harbor, and many other places. He trained men to do the painting according to Mr. [Abbott] Thayer’s theory [of countershading, in which] the color scheme for the ships was taken from the general coloring of a seagull, worked in two shades of gray and pure white, the underpart of everything being white.”

After WWI, Brush’s career as an artist can only have declined. Surely, his artwork (like that of his pre-Modern parents and friends) was all but dismissed as outmoded. As his parents aged, Gerome and his wife made increased visits to their home, in part because Louise was preparing a book about his father’s life. Unfortunately, in 1937, his father’s studio, artworks, papers and other irreplaceable artifacts (including Louise’s manuscript) were destroyed in a fire.

Eventually, Gerome and Louise Brush moved away from Dublin (although their gravestones are located there) and settled in Brookline, Massachusetts. He appears to have painted portraits, sculpted portrait busts, and created murals for the Children’s Hospital in Boston. In the 1930s, he made detailed charcoal portraits of 109 members of the Boston Symphony Orchestra. In 1936, these were published as a book, titled The Boston Symphony Orchestra: Charcoal Drawings of Its Members with Biographical Sketches. In a foreword by Edward Weeks, his process is described as follows: “Each musician sat for him in the little room that houses the Casadesus Collection [of historic musical instruments]; each played for him a solo in order to banish the last vestige of self-consciousness, and from each he has drawn comments, bits of personal history, and the gleam of aspirations which are characteristic.” 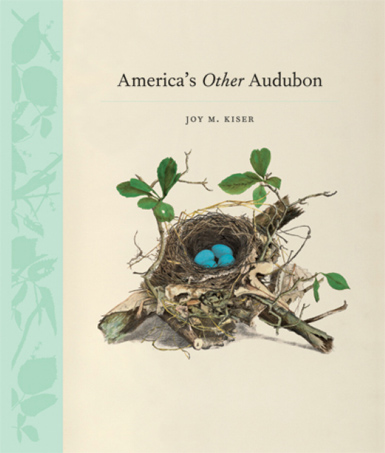 America's Other Audubon is a new large-format album of little-known ornithological plates by an all but unknown artist named Genevieve Estelle Jones (1847-1879). Her illustrations were originally published as hand-colored lithographs in 1886, just 10 years after she first saw an exhibition of John James Audubon's astonishing lithographs (Birds of America) at the World's Fair in Philadelphia. more>>>
Posted by Roy R. Behrens at 8:18 AM