This is the centenary span of years that marks the occurrence of World War I, from 1914 to 1919. As early as 2014, various agencies began to provide opportunities for artists and arts organizations (especially in the UK) to revisit the process of applying dazzle camouflage schemes to currently existing ships. We’ve featured quite a few of those on earlier blog posts, including those in London, Liverpool, the Island of Jersey and (in Australia) on Lake Burley Griffin in Canberra. There were others as well.

There is one we haven’t yet mentioned, oddly enough, because it’s easily one of our favorites. It differs from the others, because some of those, although their designs are disruptive, do not have a lot to do with the dazzle camouflage schemes that were used in WWI. Sometimes this may have occurred because the artists commissioned were too intent on being uniquely “creative,” on arriving at something appropriate for our own time period, or on using the opportunity to endorse a pressing social concern.

Actually, there’s no reason why all three of those intentions can’t have been emphasized—and, at the same time, have given priority to a design that was in keeping with the intentions of the WWI camouflage artists. The designs that they produced were not arbitrary confusions, not radical juxtapositions of bits. They were certainly accused of that, but as was explained at the time by American ship camoufleur Everett Longley Warner—

…it was precisely when our work was most firmly grounded on the book of Euclid that the uninitiated were the most positive that the ships were being painted haphazard by a group of crazy cubists.

Of the recent centenary ships, the most successful one (I think) was designed by Ciara Phillips, titled Every Woman Dazzle Ship, for the Edinburgh Art Festival (EAF) and 14-18 NOW. There’s an online time lapse video of the painting process, and a brief but informative interview with the artist. By the way, it was of particular interest to learn that one of Phillips’ primary influences was the work of American printmaker and social activist Corita Kent, a favorite artist of ours as well.
Posted by Roy R. Behrens at 10:41 AM 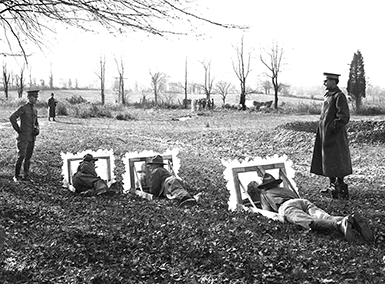 An apparent problem during World War I was that of trying to conceal an eavesdropper within listening distance of the enemy's position. As we've shown in earlier posts, this was sometimes accomplished by constructing (probably using papier mâché) the convincing likeness of a rotting horse carcass. Hollowed out and equipped with peepholes, it was of sufficient size that a soldier could secretly listen during the day, then return to his unit in darkness.

It is impossible to know how often (if at all) "ye olde dead horse deception" was actually used on the battlefield. The only photographs we've seen were made as demonstrations at camouflage training camps, and distributed to various American news services, for amusing wartime anecdotes. If the method were actually used on the battlefield, it would not be wise to reveal it to the public.

Other devices were also employed, or at least they were tested at camouflage training camps. Reproduced above, for example, is a US Army photograph of three soldiers who were testing a curious listening device that consists of a mirrored sheet mounted on a wooden frame (tilted forward slightly). The irregularly-shaped leafy edge is an attempt to make it fit in better within a natural setting. Because the panel front is mirrored, a distant observer would see a reflected image of the terrain, but not the soldier behind it. It may seem like a brilliant idea, but it can't have been very effective. In this photograph, the three soldiers are positioned so closely together that their own bodies would be partly visible in the mirror of the person behind them.

The National Archives and Records Administration online documentation of this (NARA 55162019 and 55162023) includes an additional photograph (as in before-and-after views). In that image (shown below), we see the enemy's point of view (more or less) and—voila!—there is not a trace of the hidden listeners (well, almost). 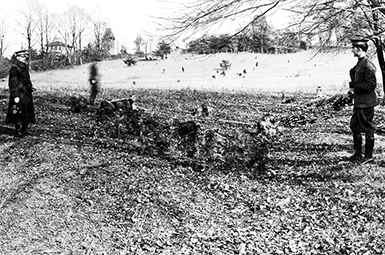 This idea was not unprecedented at the time of WWI, and it has since resurfaced frequently, probably independently of its older wartime function. As one of many examples, reproduced below is a patent drawing for a "Reflective Hunting Blind," invented c2008 by Kevin Pottmeyer and Chester Burdette and registered as US Patent 8579007 B2. It is currently available as the GhostBlind Waterfowl Blind. 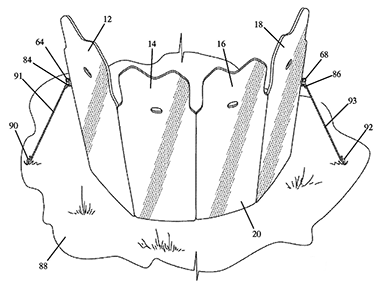 It consists of four hinged panels, irregularly shaped along the top edge, with peepholes through which a hunter can look. The inner surface is covered with a disruptive camouflage pattern, while the side that faces out (as shown here) is a reflective mirror surface (tilted forward slightly). As a result, the inventors explain—

A game animal looking into the front of the blind from a distance therefore sees only a reflection of the terrain surrounding the blind, thereby making the blind substantially indiscernible from the surrounding terrain and effectively obscuring a hunter…
Posted by Roy R. Behrens at 9:52 PM 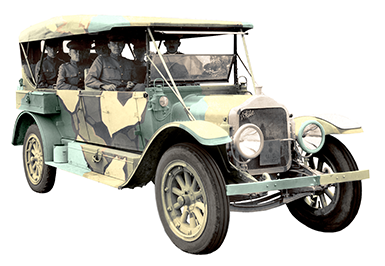 Above Camouflaged World War I US Army staff observation car (c1918). Based on an Ordnance Department photograph now in the collection of the National Archives and Records Administration (NARA). 165-WW-296A-019. Extracted from original black and white photograph and digitally colorized.

I’m satisfied with photography that shows people as they are. I think that’s what it’s for. I never could see that it was any compliment to a photograph to say that it looked like an oil painting.

It isn’t a photograph’s business to be like an oil painting, and a thing that imitates something else is just a joke, with no sincerity or usefulness in it. All that foggy, smokey, posey camouflage that they’ve dragged into photography to make it look like art doesn’t make any impression on me at all. I want a picture of myself as I am or none at all, but if you want one that makes you look like a dying duck in a thunderstorm you’d better go and get it without consulting me. 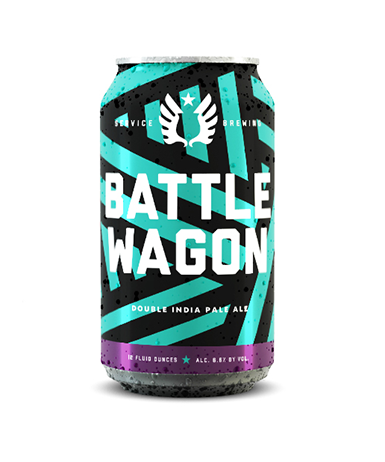 Above Des Moines-based graphic designer Kenny Miesner (former student of whom we have warm memories) shared with us this image and link to Focus Lab studio's concept (not actually used by the client) of a dazzle-camouflaged beer can. It reminded us of a reviewer's comment when the Chelsea Arts Club Dazzle Ball was held in London in 1919. The writer cautioned that the dazzle-patterned costumes might cause the dancers to collide. No doubt a couple of beers would help.