A delightful time was had yesterday while participating in an art and design conference at St Ambrose University in Davenport IA. Titled FAIR PLAY: Art and Social Justice, the two-day conference began Wednesday (April 6) and continued through the following day. Presenters came from various schools, among them Western Illinois University, St Ambrose, University of Iowa, Grinnell College, Augustana College, and the University of Northern Iowa. Above is the title slide from our own presentation titled MAKING FACES: Masking Wartime Horrors, about the work of Allied artists during World War I, in sculpting facial disfigurement masks for men whose identities had been ripped apart during trench warfare. Thumbnail views of other slides are shown below. 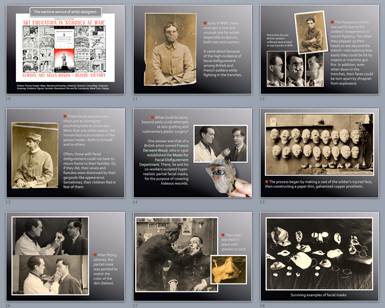 US Major-General Smedley Butler (1881-1940) is a fabled hero, the most decorated US Marine in history. While courageous on the battlefield, he was wonderfully candid in public as well. As quoted by Studs Terkel in Touch and Go: A Memoir, this is how Butler summed up his military career in 1935, in an article in Common Sense magazine:

I spent 35 years and 4 months in active [duty] as a member of our country's most agile military force—the Marine Corps. I served in all commissioned ranks from a second lieutenant to major-general. And during that period, I spent most of my time being a high class muscle man for Big Business, for Wall Street and for the bankers. In short, I was a racketeer for capitalism…Thus I helped make Mexico and especially Tampico safe for American oil interests in 1914. I helped make Haiti and Cuba a decent place for the National City bank boys to collect revenues in. I helped in the raping of half a dozen Central American republics for the benefit of Wall Street…[and] I helped purify Nicaragua for the International Banking House of Brown Brothers in 1909-12.

In another context, Butler said— 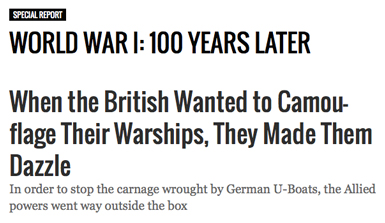 Above As of yesterday, the website for Smithsonian Magazine has posted a special online report on WWI ship camouflage by Linda Rodriguez McRobbie on World War I: 100 Years Later. The entire text and photographs can be accessed here.
Posted by Roy R. Behrens at 11:56 AM