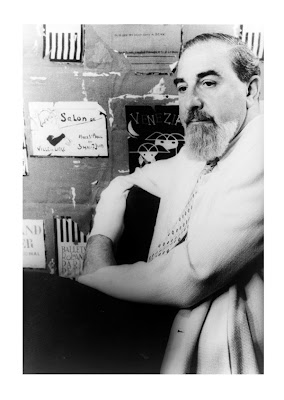 Above Photograph by Carl Van Vechten (1955) of American caricaturist Al Hirschfeld (1903-2003), widely known for his pen-and-ink comic portraits of Broadway stars and other New York celebrities. Public domain image from the Van Vechten Collection, Prints and Photographs Division, Library of Congress. Hirschfeld was also noted for embedding or camouflaging the name of his daughter Nina in his drawings, and inviting his readers to find them. Regarding this, the following is an excerpt from his online biographical entry on Wikipedia—


Hirschfeld is known for hiding the name of his daughter, Nina, is most of the drawings he produced since her birth in 1945. The name would appear in a sleeve, in a hairdo, or somewhere in the background. Sometimes "Nina" would show up more than once and Hirschfeld would helpfully add a number next to his signature, to let people know how many times her name would appear. Hirschfeld originally intended the Nina gag to be a one-time gimmick but it soon spiraled out of control. Though Nina was a popular feature in his illustrations, with many enjoying the game of searching for them, on more than one occasion Hirschfeld would lament that the gimmick had overshadowed his art. On occasion he did try to discontinue the practice, but such attempts always generated harsh criticism. Nina herself was reportedly somewhat ambivalent about all the attention. In the previously mentioned interview with The Comics Journal Hirschfeld confirmed the urban legend that the US Army had used his cartoons to train bomber pilots with the soldiers trying to spot the NINAs much as they would spot their targets. Hirschfeld told the magazine he found the idea repulsive, saying that he felt his cartoons were being used to help kill people. In his 1966 anthology The World of Hirschfeld he included a drawing of Nina which he titled "Nina's Revenge." That drawing contained no Ninas. There were, however, two Als and two Dollys ("The names of her wayward parents").
…In 1991 the United States Postal Service commissioned Hirschfeld to draw a series of postage stamps commemorating famous American comedians. The collection included drawings of Stan Laurel, Oliver Hardy, Edgar Bergen (with Charlie McCarthy), Jack Benny, Fanny Brice, Bud Abbott and Lou Costello. He followed that with a collection of silent film stars including Rudolph Valentino, ZaSu Pitts and Buster Keaton. The Postal Service allowed him to include Nina's name in his drawings, waiving their own rule forbidding hidden messages in United States stamp designs.
Posted by Roy R. Behrens at 10:09 AM