video / a dazzle advertisement of a dazzling discovery 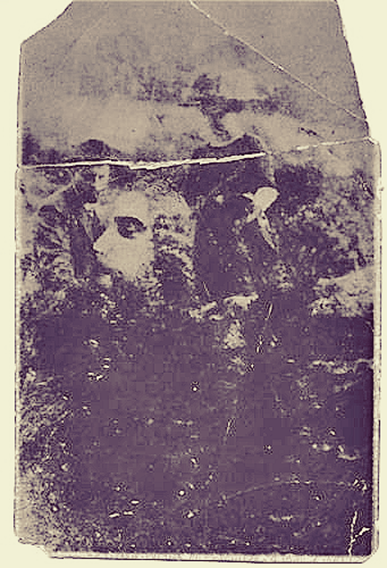 Above A damaged, 19th century Swiss photograph of a small child in a white hat (just left of center) seated on her father's lap, with her mother standing at the right. Circumstances are such that, at first glance, some viewers interpret the child's face as the eye of a profile of Christ, facing left.

Like the man in the moon, or a face in the clouds, this is an example of seeing apparently meaningful forms in random or accidental formations, called pareidolia. Unless of course (as might well be), the photograph has been altered, to increase the likelihood of seeing the figure.

As I discuss in a new online 25-minute video talk, titled Art, Embedded Figures, and Camouflage, there is a long tradition of the purposeful insertion of embedded figures (or, as they are sometimes called, camouflaged figures), in picture puzzles and works of art. Here's a brief excerpt from the video narration, followed by the two advertising diagrams that it describes—

Not surprisingly, embedded figures have also been used in advertising. During World War I, for example, at the height of the public’s interest in dazzle-painted ship camouflage, this unidentified diagram was published in a British magazine, repeatedly—on the same page, in the same location—for several weeks. It simply read: A dazzle advertisement of a dazzling discovery. That was all that anyone knew. 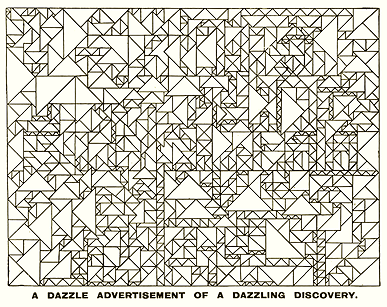 And then, suddenly, in the last week of the ad campaign, an “embedded figure” solution appeared, also on the same page, same place. Camouflage has its uses, it said, but Firth’s Stainless Steel needs no protective covering. 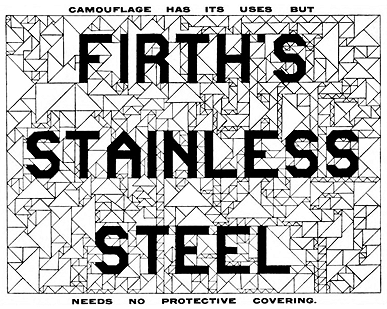 Above Here are a few of our favorites from the latest vector interpretations of WWI British ship camouflage, part of an on-going project by Steve Morris, a Washington DC-area graphic designer and toy maker. These are simply astonishing. You can find many more, clearer and at larger size, at his website. What a remarkable undertaking.

We recently told the story of the involvement of American women during WWI in the application of a dazzle camouflage pattern to a land-based US Navy recruiting station, the USS Recruit, built to closely resemble a ship. For publicity purposes, the wooden imitation ship (located in the midst of all the traffic at Union Square in New York City) was painted in a colorful scheme in one day and overnight by the Women's Reserve Camouflage Corps. Learn more, see more about women's wartime contributions in this new online video (high resolution version). 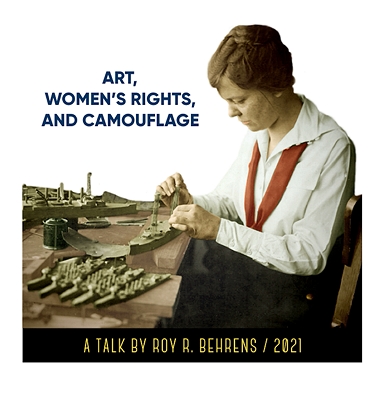 It is not widely realized that there were important connections between the rise of Modern-era art and literature, women's suffrage, and World War I. One of the most curious things they share is camouflage (including the formation of the Women's Reserve Camouflage Corps). Now accessible online is ART, WOMEN'S RIGHTS, AND CAMOUFLAGE, the second of a series of four new 30-minute video / talks about aspects of camouflage in the widest sense—military, zoological, psychological, and otherwise.