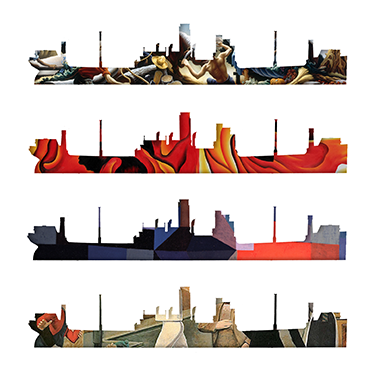 Camouflage in the last war meant whirls, blotches, stripes and curlicues with which "experts" made common objects look like a Futurist's bad dream. 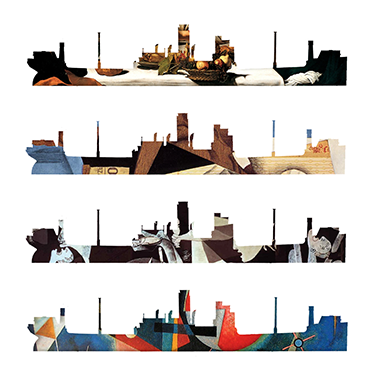 The wonders of camouflage, as it is practiced by the men of the fighting armies abroad, are much pictured and described for American readers, but any New Yorker who wants to inspect its experiments for himself has only to take a ferry boat trip across the harbor on almost any bright day. There he will see at anchor, or coming in or going out, numerous ships whose painted sides reveal such wild extravagances of form and color as make the landsman open his eyes with amazement and mystification. 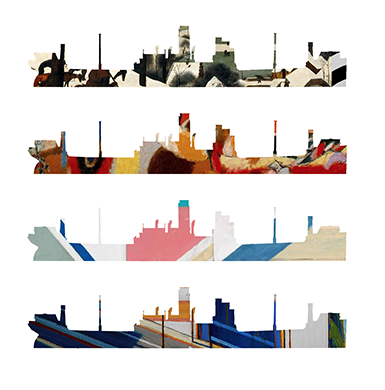 Sir Alister Hardy, The Living Stream: A Restatement of Evolution Theory and its Relationship to the Spirit of Man. New York: Harper and Row, 1965—

I think it likely that there are no finer galleries of abstract art than the cabinet drawers of the tropical butterfly collector. Each “work” is a symbol, if I must not say of emotion, then of vivid life…It is often, I believe, the fascination of this abstract color and design, as much as an interest in biology or a love of nature, that allures the ardent lepidopterist, although all these may be combined; he has his favorite genera and dotes upon his different species of Vanessa and Parnassius, as the modernist does upon his examples of Matisse or Ben Nicholson. The one-time schoolboy collector will in later life be transfixed with emotion for a moment at the sight of a Camberwell Beauty or a swallowtail—I speak from experience.

Above This is a restoration of an undated photograph from World War I, c1918. The original print can also be found online at the Navy History and Heritage Command (NH 120779), where the caption reads: "Lieutenant O. Moser, Head of British dazzle painting and camouflage for ship." How strange. In all our research of ship camouflage, we've never heard of Lieutenant Moser, much less that he supposedly served as the head of British ship camouflage. The credit for that is nearly always given to Lieutenant Norman Wilkinson. So who was Moser? (Oliver, Oscar, Oswald, Otto?) Please note on the table beside him the dazzle-painted ship model (very British and, most likely, very Wilkinson).

Update Since the above was originally posted, we've learned a bit more about the fellow in the photograph. He was a British artist and illustrator named [Robert] Oswald Moser (1874-1953). An officer in the Royal Navy Volunteer Reserve during World War I, while he was surely not in charge of British ship camouflage, he was most likely on the team who served under Norman Wilkinson, along with UK artists Jan Gordon and Cecil King. We've seen that ship model before, because it was reproduced in a 1918 article by Gordon on "The Art Of Dazzle-Painting." It shows the dazzle pattern for the RMS Olympic.

Otherwise, he was an interesting painter, whose finest artwork may have been a strange painting (somewhat Stanley Spencer-like) titled Wounded Sailors Listening to Musicians Playing on Board a Ship (c1918). But there's also a wonderful self-portrait from 1928 (reproduced below), which is in the collection of the Russell-Cotes Art Gallery and Museum.


From MEN FROM EVERY STATION IN LIFE BUILDING SHIPS. Even Doctors, Lawyers and Clerks Have Been Whipped Into Shape as Workmen; Much Friendly Rivalry (reporting on operations at the Moore Shipbuilding and Dock Company in Oakland CA) in the Albuquerque Morning Journal (Albuquerque NM), October 14, 1918, p. 1—

Ship camouflage gives every boat from this plant the appearance of some monster futurist painting that has left its frame for a spin on the ocean. The idea is carried out to such an extent that an aviator or lookout gazing down at her is deceived in her size and direction. Each camouflage scheme is worked out to give its own particular illusion.

Below is another restored photograph from the same NHHC archives in which two wooden ship models are positioned side by side, the one on the left having been dazzle-painted in the British manner while the one on the right is unpainted.

Camouflage of ships is a useless art. No longer does the much heralded war method of concealment hide allied transports from the destructive eyes of the Kaiser's U-boat, according to a statement made yesterday by Lewis Nixon, shipbuilder, at the luncheon of the Brooklyn Chamber of Commerce…

"The Germans are inventive. They are desperate and they are relying on the submarines," said Mr. Nixon. The peculiar coloring of our ships is of no avail, because they have invented a periscope that reveals the ship in outline, regardless of coloring.
Posted by Roy R. Behrens at 9:23 AM

Above We recommend a visit to a post (from October 2015) on the Tyne & Wear Archives and Museums blog. It features this photograph of a dazzle-painted model of a WWI-era tramp steamer named the SS Hindustan. Below that is an article that repeats the standard British account of the origin and purpose of so-called dazzle camouflage, supplemented by eight additional photographs of camouflaged ships. 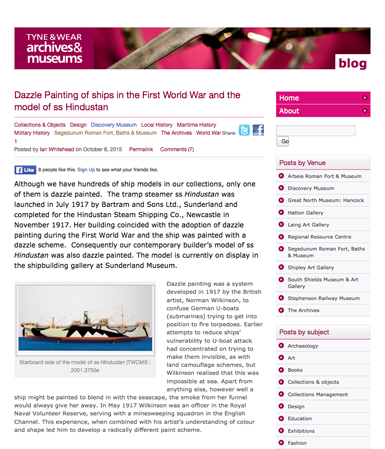 Above Just out is the current issue (Number 7) of the magazine (both print and digital) Works That Work, published in The Netherlands. Among its articles is an illustrated essay by Caitlin Hu titled "The Art and Science of Military Camouflage." More>>>
Posted by Roy R. Behrens at 3:38 PM

This is a full-page illustration from a rather curious book that came out the year that World War I ended. Written by Isabel Hornibrook and titled Camp Fire Girls in War and Peace (Lothrop, Lee and Shepard, 1919), it has an entire chapter about the efforts of a Camp Fire Girl named Sara, who (as shown here) decides to apply a dazzle design to a small boat. Throughout the chapter, there is some wonderful dialog on wartime camouflage and public attitudes toward it. The book's illustrator was John Goss (1887-1963), who headed the graphic arts department of the Rhode Island School of Design, and at one time shared a studio with typographer and book designer W.A. Dwiggins in Boston.

At about the same time, the application of dazzle-like camouflage patterns to rowboats was all but epidemic (see below), as were cartoon comparisons of dazzle with all sorts of commonplace phenomena. 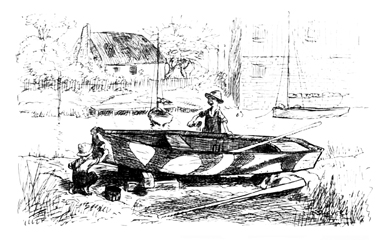