Jude Stewart is a Chicago-based writer. Back in 2013, she published a five-part online series about the visual history of camouflage at Believer magazine. That same year she also published a book (with lively text and graphics combined) titled ROY G. BIV: An Exceedingly Surprising Book About Color (Bloomsbury USA, 2013) .

In recent months, she has come out with an inevitably suitable sequel, titled Patternalia: An Unconventional History of Polka Dots, Stripes, Plaid, Camouflage, & Other Graphic Patterns (Bloomsbury USA, 2015). Anyone interested in design, vision and camouflage will find this book of value, including the following memorable quotes—

One you can accept the universe as being something expanding into an infinite nothing which is something, wearing stripes with plaid is easy.

R. Buckminster Fuller, I Seem To Be A Verb—

Man is a complex of patterns, or processes. We speak of our circulatory system, our respiratory system, our digestive system, and so it goes. Man is not weight. He isn't the vegetables he eats, for example, because he'll eat seven tons of vegetables in his life. He is the result of his own pattern integrity. 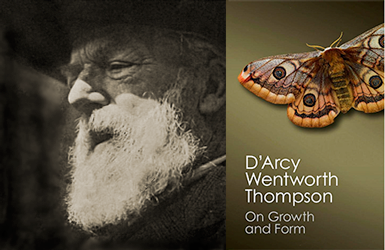 Above Photograph of D'Arcy Wentworth Thompson, and (to the left) cover of a recent edition of his famous book (originally published in 1917).

Professor D'Arcy [Wentworth] Thompson [Scottish mathematical biologist, and author of On Growth and Form] had some interesting things to say about crabs at his recent lecture at the Royal Institution, London.

There was one crab of the "spider" variety which, he said, turned the top of its shell into a sort of garden. He was often to be seen taking cuttings of marine vegetation and carefully planting them on his back, where they took root among the hairs, which meanwhile held them in position.

"This little [sic] creature," said Professor Thompson, "is a master, if not, indeed, the inventor, of what we have come to call camouflage."…

Camouflage | A Checkered Past

Above US government photograph of the port side of the USS Panaman (c1918) in dazzle camouflage. Courtesy US National Archives.

Anon, CAMOUFLAGE FIRST USED IN OUR INDIAN WARS, in The Milwaukee Journal (Milwaukee WI), January 22, 1942, p. 16 (reprinted from the Bulletin of the National Paint Association)—

The origin of the word camouflage has, it seems, been left in the shuffle. One of the stories told in connection with it is that during the Indian troubles in the southwest, one Jacques Camou• built a circular mud fort. This fort has large square openings at regular intervals around the walls in a single line. Through these the garrison of the fort used to fire. As the Indians’ shots often found their mark through these openings, Camou painted the entire fort like a checkerboard with large, black squares on a white field. This confused the Indians so that they were unable to determine which dark square to aim [at].

• There was in fact a 19th-century French general named Jacques Camou (1792-1868), but we haven’t found any connection with the American Indian Wars, nor with camouflage.

In the war between the states in America, trenches and breastworks were concealed by branches of trees, and merchant ships often painted their hulls black with gun ports simulated in white, thus taking on the appearance of men-of-war. Similarly fort walls were checkered in black and white during the World War to confuse gun locations.

Since initially posting this, we've run across numerous references to an exotic British sea fort, built in 1859, near Portsmouth, England. Known as Spitbank Fort, it is circular (see below) like General Camou's fortress, and at least part of its surface was covered at various times with an alternating pattern of light and dark checkered squares, some of which may have been gun ports.


Spitbank Fort was given up by the government in 1982. Since then it has been privately owned, and now functions as a luxury spa hotel and retreat.

Mud to Mufti | Oleo in Camouflage

Over-artistic oleomargarine producers have been sued by the [US] Government for coloring oleo in lifelike imitation of the best creamery butter.

On oleomargarine camouflaged to resemble butter, there is a tax of 10 cents a pound, and on uncolored oleomargarine a tax of a quarter of a cent a pound, substantial evidence of the government’s purpose to see that the public gets what it pays for. Hotel proprietors or boarding house keepers who color oleomargarine and serve it to their guests are subject to the same penalties of fine and imprisonment as are visited on the manufacturer and retailer. “Butter is butter and oleo is oleo, and never the twain shall be confused,” is the maxim of the government.

Above In the November 1917 issue of the Architectural Record, American artist and architect J(ules) André Smith (1880-1959) published a lengthy article on “Notes on Camouflage” (pp. 468-477). Among the ink wash drawings that accompanied the article was a view of disruptively camouflaged tents (shown here), as compared to those without camouflage.

The effect was all but identical to an approach that was used in New Zealand, at Camp Louvencourt, during the same war, as shown in a photograph (see detail below) by Henry Armytage Sanders, from April 1918. The original is in the collection of the Alexander Turnbull Library.

In Smith’s article, he includes the following passage from Italy, France and Britain at War by H.G. Wells (a criticism of British Army camouflage)—

…many of the British tents look as thought they had been daubed over by [a] protesting man muttering “foolery” as he did it. With a telescope the chief points of interest in the present British front in France would be visible from Mars…[such that] the effect of going from behind the French front to behind the English is like going from a brooding wood of green and blue into an open blaze of white canvas and khaki.

…in that it points out forcibly that camouflage is not merely a matter of daubing paint, but that it calls for the right sort of daubing and the right sort of color and, above all, demands skillful consideration and direction. In other words, it is an art and not the thoughtless application of a theory.

Reflecting on how different nationalities may arrive at different results, he later concludes—

Just what the American camoufleur will bring to this new art is still too early to predict…The art is still in an early stage of development. If the French were ingenious enough to invent it and the Germans to copy it, it is safe to say that we Americans shall first of all systematize it; we shall make a business of it—not a cut-and-dried business, but one directed with level reasoning and touched by American humor and inventiveness.
Posted by Roy R. Behrens at 2:17 PM

J[oy] Clinton Shepherd (1888-1975), an American muralist, illustrator and sculptor, is typically referred to as a “pulp artist” because of the illustrations he made for lowbrow publications. There is a biographical article about him on Wikipedia as well as on the website called Field Guide to Wild American Pulp Artists (including work examples). Less widely known is his involvement with camouflage, during both World Wars.

Shepherd was born in Des Moines IA, where his father was a men’s clothing salesman. After graduating from high school in 1906, he enrolled at the University of Missouri in Kansas City. He dropped out in 1909, at which time he and a younger brother traveled to the Northwest, apparently looking for adventure. According to some sources, they ended up living briefly with the Crow Indians.

By 1910, he had returned to the Midwest, where he studied at the Art Institute of Chicago until 1914, and thereafter worked as an artist. Prior to World War I, he served as a bugler in the Illinois National Reserve (despite an apparent hearing defect). After the US entered the war, it appears that he served in the Air Corps from 1917-1919. According to an article by Helen Van Hoy Smith, titled TROOPS, CIVILIANS LEARN CAMOUFLAGE ART, The Miami News (September 13, 1942), it was during his war service that Shepard gained “practical knowledge of it [camouflage].”

In 1919, Shepherd and his artist wife (née Gail English, also a graduate of the Art Institute of Chicago) moved to New York, with the hope that he would flourish as a professional illustrator. During the next decade, he enjoyed considerable success as a magazine illustrator for Collier’s, Saturday Evening Post, Woman’s World, and other newsstand magazines. From 1925 until 1938, he lived in Westport CT, where, following the decline of more prestigious publications, he turned to making a living by painting covers for cheap pulp publications. He also returned to his interest in Western subject matter, and produced a series of bronze sculptures, not unlike those of Frederic Remington.


From 1938, Shepherd lived and worked in Palm Beach FL. There, he taught at Barry College (now Barry University) in Miami, and served as the director of the Norton Gallery School of Art. As is documented in the news article cited earlier (supplemented by two press photographs), during the summer of 1942, he offered a free class for soldiers and civilians on how to design camouflage based on his own WWI military experience and “a working knowledge of camouflage as an artist.” The class consisted of “building and camouflaging a model town but which contains certain military structures.”

The article goes on to say that “Mr. Shepherd accompanied the lessons in camouflage with lectures and drawings. The camouflaged town represented several different methods of camouflage.” He also “called attention to the fact that nature provides the best examples for the camoufleur…Since time immemorial, men in wars have emulated nature in their recourse to camouflage.”

Edward Hurst (1912-1972) was born in Knoxville, Tennessee. Without completing high school, he moved to New York to study at the Art Students League with George Luks. He also studied in Europe at the Academy in Florence, Italy, in London, and at the school of Moritz Heymann (with whom Hans Hofmann had also studied) in Munich, Germany. Primarily known for his still-life paintings and commissioned society portraits, Hurst spent much of his life in New York and London, while also maintaining a studio in Knoxville.