During World War I, the shoulder patch insignia of the French Army's camouflage corps was a chameleon. Related to that, this is a diary entry on July 16, 1919, by Folies Bergères dancer Liane de Pougy in My Blue Notebooks: The Intimate Journal of Paris's Most Beautiful and Notorious Courtesan (Tarcher, 2002)—

One of Jean Cocteau's jokes. Talking of a chameleon, he said: "Its master put it down on a tartan rug and it died of over-exertion."
Posted by Roy R. Behrens at 8:47 AM 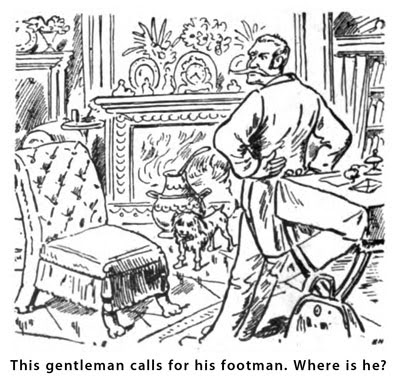 Above An embedded figure drawing or puzzle picture from a turn-of-the-century issue of The Strand Magazine (c1907). Finding the footman is a matter of shifting attention or emphasis, at which point his figure emerges from what had formerly been the (back)ground.
Posted by Roy R. Behrens at 8:02 AM

Shown here are the drawings for a patented game-like invention called "Puzzle," devised by Charles E. Winters of Crawfordsville IN. US Patent No. 2,670,961 (1954). It's essentially about the detection of embedded figures (or camouflaged figures), in which a shape is hard to see because it is subdivided by other shapes (called figure disruption or dazzle) and/or because its context (or background) is distracting and complex. As seen in the lower drawing, in this game, simple drawings of animals become a challenge to detect when a larger complex drawing (printed on a transparent sheet acetate) is superimposed on them.
Posted by Roy R. Behrens at 8:50 AM

The following are excerpts from an Oral History Interview with American artist and art historian Clinton Adams, who served as a camouflage artist in World War II. The interview was conducted by Paul J. Karlstrom on August 2, 1995, at Adams' home in Albuquerque NM for the Archives of American Art. The entire interview is available online here—


Clinton Adams: But filling in the wartime years, I was fortunate in that I did not go overseas, was in this country. If I had just not been given one transfer that happened out of chance, I wouldn't be in this country now or anyplace else, because the Engineer Camouflage Battalion that I was assigned to landed in Normandy on D-Day Plus One, and took about 85 percent casualties. But there were several other artists, as you might imagine, in Engineer Camouflage Battalion, because they recruited artists for utterly irrelevant reasons. They had a notion that camouflage had something to do with the visual arts. It was an interesting unit.…
Paul J. Karlstrom: I want to ask you a couple of questions, if I may. You mentioned other artists in the Engineer Camouflage group. Any that would be of special interest to us?
Clinton Adams: Two of significance. Jesse Reichek, who became my closest friend, and certainly you know Jesse and you know Jesse's work. Jesse was in the unit from early on. Jesse's a very, very willful character, shall we say. Jesse was not willing to put up with regulations quietly, and one of my jobs as assistant adjutant was to keep Jesse from being court martialed at one point. But we've had a close, close friendship over now, what, fifty years. When we get together, we argue about art and the discussion picks up just where it left off the time before. And Marshall Fredericks, who was a member of the National Academy, rather conservative traditional sculpture, was one of the company commanders. There were several fine theater people. George Izenour, the theater designer, a very prominent theater designer who did a lot of the design of Lincoln Center, etc., etc., was in the unit, and there were a number of others. Karl Bruder, who was a professor of theater in Kansas. A great number of people who eventually wound up one place or another in the arts. The only one I've kept up closely with is Jesse Reichek and Henry Klopot, K-L-O-P-O-T, who lives in Hollywood, and was one of the chief lighting designers for the studios over a period of years.
Posted by Roy R. Behrens at 8:07 PM

Eric Sloane (1905-1985) was a widely-known American artist and author, who wrote and illustrated (with exquisite pen-and-ink drawings) a 60-page overview of the principles of camouflage, titled Camouflage Simplified (New York: Devin Adair, 1942). It's a challenge to locate a copy to buy (the lowest price I found online a few minutes ago was $300), but it should be available through interlibrary loan, since, according to WorldCat, about 90 US libraries have it in their collections. Here's more about Sloane from a biographical article in Camoupedia: A Compendium of Research on Art, Architecture and Camouflage (p. 362)—

[Sloane's] name at birth was Everard Jean Hinrichs. In 1919, his family moved to Long Island, where he became friends with his neighbor, the typographer Frederic Goudy, who taught him hand-lettering. He then studied briefly at the Art Students League (where he was influenced by John Sloan, whose name he would adopt c.1934, while adding an e at the end), and at the New York School of Fine and Applied Art, where he was enrolled as a “graphic advertising major.” Due to poor attendance and failure to submit his work, he never completed his courses, yet he decided soon after to enroll at Yale University, where he lasted only several months. In the 1930s, through his interest in flying, he became friends with aviator Wiley Post, in the process of which he decided to paint “cloudscapes.” He studied meteorology at MIT, and later, during World War II, served with the Army Air Force as an instructional interpreter of complex flight-related terms.
Posted by Roy R. Behrens at 6:48 PM

The following is an excerpt from an Oral History Interview of American artist Perkins Harnly (1901-1986), who served as a Depression-era Works Progress Administration muralist and, during World War II, as a camouflage instructor. The interview, which took place on October 15, 1981, was conducted for the Archives of American Art by Estil Pennington and Lynda Hartigan. The entire interview can be accessed online here—


Mr. Harnly: …when the WPA broke up—when the war was declared, you see—we were put on defense projects. I was put in aluminum.
Ms. Hartigan: And you taught camouflage design?
Mr. Harnly: Yes. I was an…instructor of officers. Yes, I certainly was. One of my officers in camouflage was William Pahlmann, who was the famous interior decorator. Gene Davis, who was the art [director] of [Good] Housekeeping Magazine. I had big shots.
Mr. Pennington: Leslie Cheek, did you work with him?
Mr. Harnly: I know the name, I know the name. I know the—I can't place him at the moment. But they gave me the project of the people who had much experience, much background, and all that. And we went to Fort Belvoir, Virginia, the place where Homer Saint-Gaudens was, a relative, son of the great sculptor, I think.
Mr. Pennington: Yes.
Mr. Harnly: Well, anyhow, he was the head of this thing, of camouflage, until the air bombing of Cologne. It took 22,000 planes to mow the city down. All but the cathedral, they left the cathedral. And after that, camouflage, as we knew it, was not of any use. They used tactical camouflage after that.
Posted by Roy R. Behrens at 1:27 PM

American comedian Ernie Kovacs (1919-1962) was widely known in the late 1950s and early 60s for his off-beat television programs that combined sight gags with unorthodox uses of technology. He often made use of psychology, especially visual perception, including camouflage. The segment shown here begins with a series of three full-screen signs that read: "FELLAS! Lonesome? Like a girl of your own?"; "Someone your wife can't see because she's INVISIBLE?"; and "Then—send for your INVISIBLE GIRL FRIEND!" This was followed by scenes from a living room, in which a transparent woman gradually disappears as she undresses. In the final frames, the only things visible are a hat, a glove, her dress and high-heeled shoes.
Posted by Roy R. Behrens at 8:50 AM

American expatriate writer Gertrude Stein often made interesting statements about art and camouflage, most of which can be retrieved from her two autobiographies, The Autobiography of Alice B. Toklas (1933) and Everybody's Autobiography (1937). In the latter, she wrote—