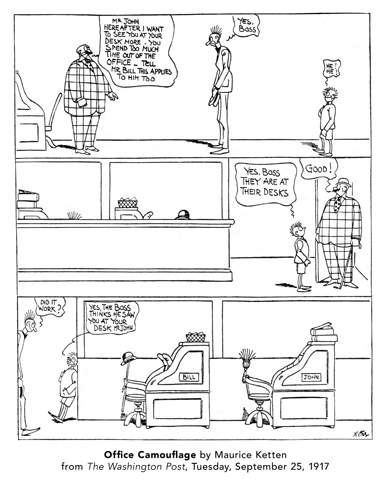 Until a few days ago, we had never heard of an Italian-born American cartoonist named Maurice Ketten (1875-?), née Prosper Fiorini, and at this point we still know very little. Apparently he studied art in Paris at the École des Beaux Arts, then emigrated to the US around 1906. He became a well-known cartoonist for the New York World (1907-1930s), for which he produced a daily cartoon. Shown here are two cartoons he made about camouflage that were featured in the Washington Post in 1917.

Dialog for Office Camouflage (above)—

—Mr. John, hereafter I want to see you at your desk more. You spend too much time out of the office. Tell Mr. Bill this applies to him too.

—Yes, Boss, they are at their desks.

—Yes, the boss thinks he saw you at your desk, Mr. John.

Dialog for Home Camouflage (below)—

—Go to our room and go to bed! You can't go out tonight.

—The inventor of the fire escape must have been a married man.

—Something queer! He is not snoring.

—Well! What a clever home camouflage!

—Never! If she goes to my room she'll think I'm asleep. I did a nice little bit of camouflage.

—The idiot! He doesn't know yet after forty years that he never sleeps without snoring. 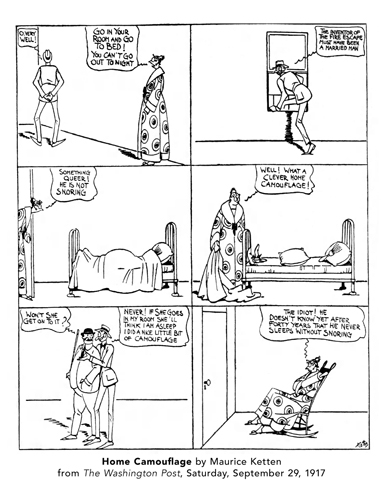 Above In recent years, all sorts of people have adapted disruptive camouflage schemes (or dazzle patterns) for innovative use in surprising contexts. None have been quite as refreshing as the recent work of a Philippine-born artist named Stephanie Syjuco, who is now based in California (BFA San Francisco Art Institute, MFA Stanford University). Earlier this year, she completed a series of digital renderings of "speculative proposals for public works" called Dazzle Camouflage Propositions. Shown above is her dazzle-surfaced version of Frank Lloyd Wright's Fallingwater (she's also done something comparable for Le Corbusier's Villa Savoye). Among her other proposals (see below) are dazzle applications for Silicon Valley "Google buses," IKEA furniture, and a Philippine jeepney.

Above During World War I, those artists (civilian or military) who were not assigned to camouflage contributed in other ways. In the US, for example, a considerable number of artists designed recruiting, fundraising and propaganda posters. This particular one of a brightly dazzle-painted ship was produced in 1918 by an American artist named Leon Alaric Shafer (1866-1940), better known as L.A. Shafer.

In a recent post, we mentioned the return to San Francisco at the end of World War I of two dozen California artists who had served as US Army camoufleurs in France. Among those listed was an Armenian-born sculptor named Nishan G. Tooroonjian (1888-1966), who later changed his family name to Toor.

Reproduced above is a photograph of him that appeared in a periodical called The New Armenia, Vol X No 3, March 1918 (at which time he was still in France). His drawing appears on the cover of that issue, and the photo caption reads: "N.G. Tooroonjian. Camoufleur, AEF in France. The cover design of The New Armenia was drawn by him."

A substantial entry on his life was published in the 1942-43 edition of Who's Who in California, and there is a website that features about forty of his works, as well as some wonderful photos of him, self-described as a "disguised agitator." 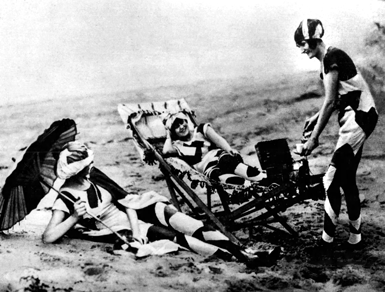 Above Here's one more example of the fashionable adoption of dazzle camouflage bathing suits near the end of World War I. Add this to our previous posts on the same subject. Accompanying this photograph was the heading WARS[sic] EFFECT FELT IN BATHING SUITS: Camouflage is supposed to hide things. Bathing suits seem built to reveal. Yet here are these beach nymphs in paradoxical camouflaged bathing suits. The same photo appeared in various newspapers in the US and Canada around the same time, this one in The Winnipeg Tribune, in the Society Section and Woman's Magazine, Saturday, August 16, 1919, p. 1.

That the new "dazzle camouflage" design on summer skirts may be all right for the ethereal nymph-like form, but for over umpteen stone specimens the least said the better.

LONDON—The artists who decorated our recently almost invisible ships and who hid the armies of the western front behind and under painted canvas and "ersatz" villages are out of a job.

The dazzle hat has arrived, and with it a game.

"If you see coming toward you a woman who in some unaccountable way seems to melt into a sort of rainbow mass above the shoulders, don't be alarmed; try to find her hat."

To the uninitiated the new spring designs seem to be meaningless collections of colored stripes and zigzags. Some are even more like forked lightning.