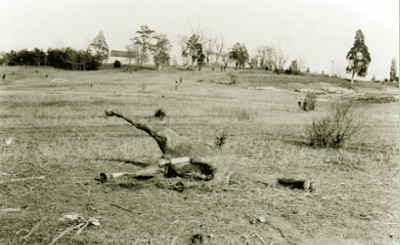 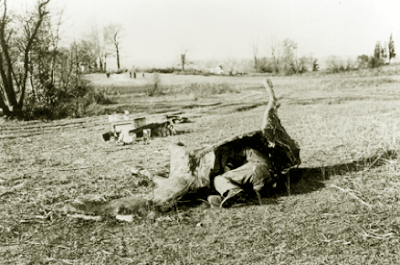 Pictured above are US Government photographs showing the same subject from two camera angles. The top photo appears to be the carcass of a dead horse on a World War I battlefield, but the bottom photo shows that it is only a papier mâché simulation of a horse carcass, with a sniper hidden inside.  This kind of camouflage was described in a war memoir by an American soldier named Samuel Benney Benson titled Back From Hell (Chicago: A.C. McClurg, 1918)—

The system of camouflage which the French have worked out in this war [World War I], is something new also. The word has come to mean in America "dodging," "deception," "bunk," or anything that is not out in the open and above board; and that is just what camouflage means in the war in France. It is a method by which things are made to appear to be what they are not, for the purpose of fooling the enemy. It makes an artificial thing seem to be a natural thing so that it will not excite suspicion and draw his fire. When the French place a battery of guns which naturally they do not want put out of commission by the enemy's guns, they have the camouflage artist get busy with his paint and canvas and create a whole lot of little trees or bushes just like the ones which grow in the ground and then under cover of darkness when the enemy can't see them, or when his attention is distracted, they plant the trees, place the guns behind them, and they have a concealed battery.

Snipers are also often hidden in this same kind of a manner. The camoufleur with his magic art of scenery makes a dead horse. He has his head stretched way out on the ground and his legs pointing up in the air, stiff and stark. A great hole or chunk has been torn out of his body, but as it happens, it is never right through the middle part of him because this would not leave protection for the sniper. The horse "conveniently" had the shell strike him on the side. He is placed wherever he will do the most good in the night time and Mr. Sharpshooter, with his noiseless rifle and plenty of ammunition and one day's food, crawls in behind him. There he stays till daybreak. Yes, and a long while after. He must stay there all day long until darkness again draws down a curtain of safety about him, for if he attempted to move out in daylight some sniper or machine-gun artist would instantly pick him off. If he lays low till dark he may fool them and get away all right.

But the camera sometimes discovers things which the human eye would not detect, and the camera is always busy. The air flier might soar above a spot in the enemy's lines and not notice anything wrong or see that there was any object in addition to what was there the day before, but when he snapped the shutter of his camera and the photograph was developed, by comparing it with yesterday's photograph of the same place, he might see that there was an extra horse's carcass lying there. Now he knows there was no cavalry charge through the night, and so he becomes suspicious. Consequently the horse is watched. Perhaps in time, some one sees the man's arm protruding a little, or perhaps a man is picked off without any apparent cause.

Just for luck the enemy takes a shot at the old dead horse and suddenly a man rises and tries to run back. But he stumbles and falls. He is killed. Perhaps he has accounted for a half dozen Boches during the day and the Frenchman dies happy. That's what he's there for, to sacrifice his life for France in weakening Germany's cruel hold upon his country.

…Very often they camouflage roads with evergreen trees so as to hide the view of the motor lorries and camions which are so essential in taking supplies and ammunition up to the front. An old forlorn and battered gun may camouflage a fine new field piece, and sometimes a weatherbeaten, broken-down piece of farm machinery may be counterfeited in order to hide an observer, a listener, or a sniper. Such a man must be of a stout heart and not afraid to go over the Great Divide for it is full of hazard. If he is discovered it's all over for him.
Posted by Roy R. Behrens at 3:09 PM

Camouflage as Hide and Seek

According to what I’ve been able to find, Reginald John Farrer (1880-1921) was an accomplished British gardener, writer and botanist, who wrote a half-dozen books on plants and related subjects, notably My Rock Garden (1907). During World War I, that Reginald Farrer was apparently living in Asia (China, Tibet, Burma), so it seems unlikely that it was the same person who was sent to France by the British Department of Information to write about life in the trenches. The wartime letters of this latter Farrer (is it the same person?) are highly unusual views of the Front and were published as The Void of War: Letters from Three Fronts. London: Constable and Company; Boston: Houghton Mifflin, 1918. They include this lengthy passage in which he talks about camouflage (pp. 67-68)—


The real thing about the human side of the war is the sheer fun of it. In certain aspects the war is nothing but a glorious, gigantic game of hide and seek—camouflage is nothing else. It is not only the art of making things invisible, but also of making them look like something else. Even the art of inconspicuousness is subtle and exciting. What glory it must be to splash your tents and lorries all over with wild waggles of orange and emerald and ochre and umber, in a drunken chaos, until you have produced a perfect futurist masterpiece which one would think would pierce the very vaults of heaven with its yells. However, as pandemonium produces numbness in the ear, so I suppose a Lost-Dog’s-Home-at-Battersea in chromatics does deaden visibility in a dun-colored ensemble.


But disguise is an even higher branch of the art: you go on to make everything look like something else. Hermit crabs and caddis worms become our masters. Down from the sky peers the microscopic midget of a Boche plane: he sees a tree—but it may be a gun: he sees a gun—but it may be only a tree. And so the game of hide and seek goes on, in a steady acceleration of ingenuity on both sides, till at last the only logical outcome will be to have no camouflage at all. You will simply put out your big guns fair and square in the open, because nobody will ever believe, by that time,  that anything really is what it looks like. As far as the guns go, the war is developing into a colossal fancy dress ball, with immunity for the prize: wolves in sheep’s clothing are nothing to these gentle shepherdesses of the countryside. The more important they are, the more meekly do they shrink from notice under dominos of boughs or sods, or strawberry-netting tagged over with fluffets of green and brown rags. And sometimes they lurk under some undiscoverable knoll in a coppice, and do their barking through a little hole from which you would only expect rabbits, not shells. It must be the most endless joy to go on planning these disguises. One would lie awake at night wondering how to make one's gun look like a dog kennel, or a dog kennel conceal a gun. But, of course, the individual camouflage is even more exciting yet.


…And, of course, this fun sense of his [the individual] has full play in this new warfare. It is all "I spy," on terms of life and death: the other fellow must not spy, or you hear of it instantly, through your skull. Think how it must sharpen up the civilization-sodden intelligence of a man, to have to depend for dear life on noticing every movement in a bush and every opening in a bank. Now we are getting back with one hand what we had lost by giving up the other to machinery. We are growing to make the best of both worlds, the mechanical and the human, without giving up our mental balance by relying exclusively on either. I only wish I could give you an idea of the devices and ingenuities that these grown-up hide-and-seekers have elaborated. All sorts of ludicrously simple things, the more ludicrously simple the better.


Every blank-faced trench rampart of sandbags has its hidden eyes—eyes perfectly wide awake all the time, and winking at you wickedly with a rifle. But for your life you could not spot them, until you had had weeks of training, and learned the real meaning of every tiny unevenness or discoloration or bit of darkness. And even then you have to learn to guess which of these is harmless—so as to blind the others with your own fire. Or there is an innocent, untidy, earthy bank, a dump of old boots and tins and bottles and teapots without spouts. But any one of those forlorn oddments may also be the eyelid of a rifle. Only you do not know which—until you have found out! In the beginning of the war you did not find out. Everything was neat and tidy and civilized and well arranged: so you merely got killed.


It has taken us long experience to reconquer the primitive shifts and cunning of our ancestors. What would have seemed utterly childish to any soldier a few years since, is now his essential wisdom. You are bound to have eyes in every eyelash, and a wireless at the end of every nerve, if you are to come out a prize winner in this game of hide and seek. Even in this, the most mechanical and vast of all wars, it is the individual red Indian who ultimately wins.


They do not go to Napoleon and Wellington nowadays for inspiration, they go to the praying mantis and the leaf butterflies. Look at those trees in that avenue—that third tree in particular, that projecting bough, now botanically and aesthetically accurate. All is motionlessly silent: rural peace pervades the whole world. And, if you meditate on this a tithe of a second too long, out of that bough, most improperly and unexpectedly, there comes a little streak of fire through your heart. You must not put your trust in the tranquility of nature nowadays, any more than in princes or any child of man. Who knows whether that molehill really is a molehill? That corn stook among the others, does it really look quite as a normal corn-stook should? What a scandalously untidy sight that heap of potato peelings and old sacks!—until suddenly it shoots.


I tell you, it is wonderful and fearful, this game, in its fascination—keeping you on razor's edge and razor's edge of vital uncertainty. It is the very apex of sport; it makes big game shooting into a croquet tournament. All the time you are playing for your life with eyes and brains for counters. It must be a potent illumination and stimulant for the human mind—which five years ago would almost have wanted a policeman to help it across the street, or a moving stairway to get it up to the second floor of Harrod's…