not hardly the last of the (dreadful) camouflage jokes 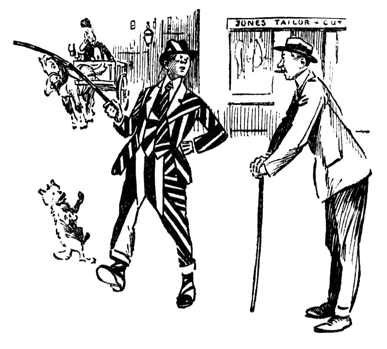 Above THE LAST (?) OF THE CAMOUFLAGE JOKES, cartoon (artist's signature unclear) from London Opinion reprinted in The Brooklyn Daily Eagle, June 3, 1919, with the following dialogue—

“Why this dazzle get-up?”

“Fact is, dear boy, when my beastly creditors do see me, I’m hoping they won’t have the least idea in which direction I’m going.”

In gauging the speed of their prospective prey submersibles must base their reckoning on the sweep of a vessel’s lines from stern to stern. Recent tests off Sandy Hook [NJ, off New York Harbor] demonstrated that the interruption of these lines created by the zebra-like stripes of the camouflage artists causes errors up to 40 per cent, as to the knots per hour being negotiated by a bedaubed ship…Under normal conditions, observers are able to come within 2 per cent of a vessel’s speed, showing what protection the cubistic color scheme affords against the hostile torpedo.

NOTE  We found out recently that there was a French artist named Georges Taboureau (1879-1960), primarily known for his travel posters, who designed ship camouflage for the French during World War I. He frequently signed his work as Sandy Hook.