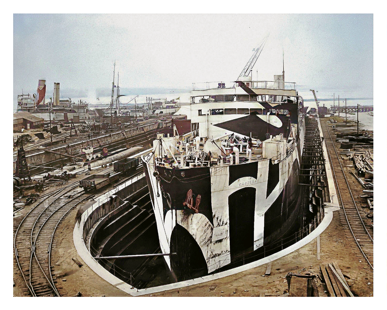 Above US government photograph of a dazzle-camouflaged British tank steamer, the Cadillac (c1918). AI colorized black and white photograph.

NEW YORK, Feb 23—Camouflage is all right on the high seas but its a nuisance in port.

So say skippers on the harbor ferries here.

A great liner with razzle, dazzle decorations almost cut a Lackawanna ferry in two when the steamship emerged from her self-established concealment the other day.

With the port full of pied pigment, commuters are wearing goggles to avoid paint shock. Whereas the early idea of camouflage was to make the ship blend into the sea and air, the latest wrinkle is to so dazzle enemy gunners that they are unable to properly adjust their range finders.

The steamer that almost sank the ferry boat was a work of art. Light blue covered her bow for 20 feet then appeared three green and white semi-circles while a great black band ran across the poop deck at the sheer strake to a point on the waterline abaft the foremast. It was thirty feet broad. This black streak sprang from an arrangement of black and white concentric circles.
Posted by Roy R. Behrens at 4:57 PM