Nordfeldt designed ship camouflage for the US Shipping Board during World War I, in San Francisco. He was a fascinating character, with an all but unbelievable range of interests and capabilities. The newspaper article below provides an account of the wartime camouflage work he did with William Penhallow Henderson, Maynard Dixon, A. Sheldon Pennoyer, Edgar Walter and others.

Most delightful as well as instructive was the talk on “Ship Camouflage,” given by William Penhallow Henderson at the new museum [New Mexico Museum of Art in Albuquerque] on Tuesday evening before a really distinguished audience that included Lieutenant Governor and Mrs. [Benjamin] Pankey and other state officials, playwrights, poets, painters, scientists, educators and the social set. Col. Ralph E. Twitchell presided and cleverly introduced the speaker who illustrated his talk with the model of a camouflaged ship made by [Bror Julius Olsson] Nordfeldt, and with blackboard drawings. Mr. Henderson and Mr. Nordfeldt had been in charge of the work of camouflaging the ships on the Pacific coast at San Francisco and shipyards north and were so successful in developing the technique and devising patterns that their work became standard for the rest of the country. It was a significant statement that up to two weeks before the signing of the armistice not one ship camouflaged according to the method adopted was sunk. Mr. Henderson described how the first theory adopted, that of low visibility, proved unsatisfactory because of its limited application. It was followed by a brief period of experiments with a transition method of “impressionism,“ which was succeeded by the successful “cubist” or “distortion” patterns. Four basic patterns for that method were adopted on the Pacific coast, a combination of several of these being developed into the most successful patterns by Mr. Nordfelt and Mr. Henderson. The latter described how practical steps were taken to save the government large sums on paint and labor developing an efficiency which permitted them to accomplish with three men what it elsewhere took sixty to do. It was explained that the enemy submarine made three observations in order to get the range for the torpedo, these observations being taken at a distance of from 2,000 yards to several miles. For the last and nearest observation only eight seconds, at the most, were available to the submarine observation officer and if he was deceived by the camouflage pattern as to the location of his third sighting point, the location of the vitals of the ship and its superstructure, then the object for which the ship was camouflaged was attained for the torpedo was certain to go wild or at the most would strike only such portion of the ship as was amply protected by bulkheads. Mr. Henderson made his talk doubly interesting by the relation of incidents at the shipyards and detailed explanations of the science of camouflage which gave his listeners a far different idea than most of them had formed by casual reading.

Below William Penhallow Henderson and his wife, the writer and editor Alice Corbin. While they were living in Chicago, she was an associate editor for Poetry Magazine, while he was commissioned by Frank Lloyd Wright to design murals for Midway Gardens. He also designed the scenery for an innovative Chicago-based stage production of Alice in Wonderland.* In 1916, when it was determined that his wife Alice had tuberculosis, they moved to Santa Fe NM. After the US entered the war in 1917, Henderson began to work on ship camouflage in San Francisco. 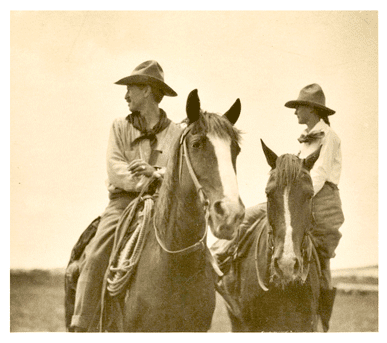