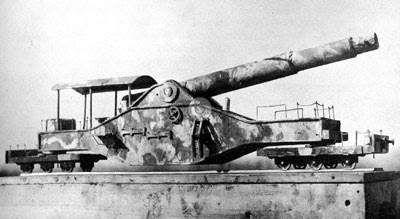 American artist A(lbert) Sheldon Pennoyer (1888-1957) was originally from California. In 1913, he was living in Paris, where he was a student in the Architectural Section of the École des Beaux Arts. When his interests turned to art, he enrolled at the Académie Julian. Soon after, World War I broke out, and he returned to California.

In 1954 he wrote, “World War I found me in the 40th Engineers Camouflage Corps that was forming at Camp American University, Washington DC.” He recalls that one of the major events in the winter of 1917 was “the famous Camoufleurs’ Ball at the New Willard Hotel,”  for which Pennoyer was assigned by his commanding officer, Captain Aymar Embury II, “to build a model of a railroad field gun [shown here] which he wished to use as a centerpiece for his dinner table when he entertained a number of his officers and men before the opening of the ball… Sash pulleys for wheels, heavy cardboard mailing tubes for the gun barrel, plenty of quick-drying camouflage paint and moss representing the grass along the roadbed, tied in fairly closely with all we could see in a photograph we had of a railway gun in France. It had a fake realism quite in keeping with all the deception we, as camoufleurs, were attempting at the time.”•

That same winter, Pennoyer’s unit sailed to France, then traveled by train to Dijon. There, he and several others (with Sherry Edmundson Fry in the lead) were assigned by Embury to function as a liaison to the French camouflage section. In that capacity, one of his most challenging requests was to camouflage a massive fourteen-inch naval railway gun, with a firing range of up to thirty miles.

A lifelong railroad enthusiast, Pennoyer was especially known for his depictions of subjects related to railroads.