Above Of the World War I British war artists (assigned not as combatants, but as eyewitness artistic observers) undoubtedly one of the finest was a so-called Futurist painter and printmaker named Christopher Richard Wynne Nevinson, who is nearly always listed as C.R.W. Nevinson (1889-1946). His dramatic portrayals of aerial flights are especially compelling, as in the colored lithograph above. Titled Banking at 4000 Feet, it was initially published as a colorplate in J.E. Crawford Flitch, The Great War: Fourth Year: Paintings by C.R.W. Nevinson (London: Grant Richards, 1918).

As striking as Nevinson's work may be, neither it nor he were ever immune to being satirized in the public press, who always had trouble accepting the use of disruption, distortion and abstraction in styles of Modernism (Cubism, Futurism, Vorticism). This attitude persisted (and still persists, to large extent) even after art defenders claimed that those were precisely the methods employed in the design of disruptive wartime camouflage, called dazzle-painting.

For example, reproduced below is an innovative photographic portrait of Nevinson, which appeared in The Sketch (May 21, 1919, p. 143), on a page that bears the headline A "CUBIST" CUBED—BY THE CAMERA. Beneath the photograph, there is a smaller heading that reads Nevinson—Reduced to His Own Artistic Formula.


As it turns out, this experimental photograph was made by none other than Bertram Park, a well-known British society photographer (somewhat avant-garde himself), whom we have previously blogged about in relation to his photographs of the outlandish costumes at the Chelsea Arts Club Dazzle Ball. Below the Park photograph, we are provided with the following caption—

Before the war, Mr. C.W.R. Nevinson was associated with the Futurist movement in art, but his peculiar style of cubism and realism combined was not developed until 1916, when he held his first War Exhibition, and was appointed an official war artist. He has painted pictures for the Canadian War Memorial, and many of his works have been bought by museums—at home and abroad. The above photograph of the Cubist artist by a camera converted to Cubist convention was taken recently, before Mr. Nevinson sailed for America. It is, to say the least, unconventional.

That same year, in the August issue of Current Opinion, Park's photographic portrait of Nevinson was reprinted (as shown below) in a two-page feature on Nevinson's assertion that Cubists and Futurists Had a Presentiment of the Coming Conflicts. Appearing in the magazine's section on Literature and Art, the headline for the article was HOW THE WAR VINDICATED "MODERN" METHODS IN ART. 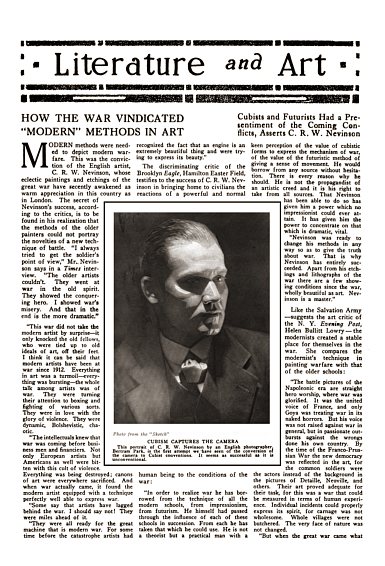 As quoted from an interview in the Times, here is part of what Nevinson said—

This war did not take the modern artist by surprise—it only knocked the old fellows, who were tied up to old ideals of art, off their feet. I think it can be said that modern artists have been at war since 1912. Everything in art was a turmoil—everything was bursting—the whole talk among artists was of war. They were turning their attention to boxing and fighting of various sorts. They were in love with the glory of violence. There were dynamic, Bolshevistic, chaotic.

…Everything was being destroyed; canons of art were everywhere sacrificed. And when the war actually came, it found the modern artist equipped with a technique perfectly able to express war.