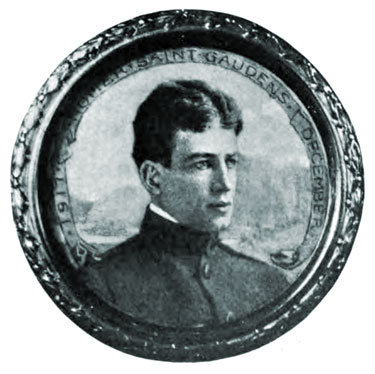 Above A portrait by Carlota Saint-Gaudens of her husband Lieutenant Homer Shiff Saint-Gaudens in his US Army uniform in 1917 when he was in charge of the camouflage corps. As published in International Studio (December 1919).

In the opening pages of Hannah Rose Shell's book about camouflage and surveillance, Hide and Seek: Camouflage, Photography, and the Media of Reconnaissance (Zone Books, 2012), she describes the resourcefulness of Homer Saint-Gaudens (1880-1958), who invented a way to make blanket-like camouflage coverings by shredding books and papers.

As Platt explains, the young Saint-Gaudens enjoyed gambling and fencing, and during World War I, he was the officer in charge of the American Camouflage Corps. Her thesis is not so much about Saint-Gaudens' camouflage service as about his presumed reliance on gambling, fencing and camouflaging skills in the decades while he was director of an annual competition called the Carnegie International Exhibition. In that capacity, she writes, he "would 'play the odds,' parry and thrust with the many different constituencies that he needed to satisfy, and disguise radical styles in the midst of bland examples in order to avoid attacks."

Homer Saint-Gaudens had earned his degree at Harvard, where his freshman roommate was future muralist Barry Faulkner (who soon dropped out to study art). Faulkner was a cousin of painter and naturalist Abbott H. Thayer, who was sometimes referred to in news articles as "the father of camouflage" because of his startling assertions about "concealing coloration" in animals. Faulkner had also studied with Saint-Gaudens' famous father, as had his friend, a sculptor named Sherry Edmundson Fry. Later, when Faulkner and Fry were living in New York, they formed a civilian camouflage group, called the New York Camouflage Society, for the purpose of preparing artists to serve as army camoufleurs. When the US actually entered the war, the two men were among the first to join a unit called the American Camouflage Corps. To their surprise, the person in charge of that unit was Homer Saint-Gaudens, who was fresh out of officer training.

It appears that other officers admired Saint-Gaudens, while the enlisted men despised him. According to Grenville Rickard, an architect and camoufleur who had graduated from Yale, and who served in France in WWI, "The 'Saint' [was] our generally accepted term for Lieutenant Saint-Gaudens…" but Faulkner (not an officer but an enlisted soldier in the same unit) recalls that Homer Saint-Gaudens was "intensely disliked by the men."

As Platt explains in detail, before and after WWI, Saint-Gaudens was employed in the theatre, as the stage manager for the widely-admired actress Maude Adams. In 1921, he was appointed Assistant Director of the Department of Fine arts at the Carnegie Institute in Pittsburgh, and then became the Director a year later.

It is of further interest that, in 1924, there was a new addition to the painting faculty at the Carnegie Institute. It was Everett Longley Warner, an artist who had been the head of a team of US Navy ship camoufleurs during WWI.

Below Roy R. Behrens, Angels Can Fly. Digital montage, print on paper (2011). Based partly on a photograph of a bronze sculpture by Augustus Saint-Gaudens (1891) for the Adams Memorial in Rock Creek Cemetery, Washington DC. The setting for the sculpture was designed by Stanford White. For detailed information, see Joyce K. Schiller, The Artistic Collaboration of Augustus Saint-Gaudens and Stanford White. PhD dissertation. (St Louis MO: Washington University, 1997). 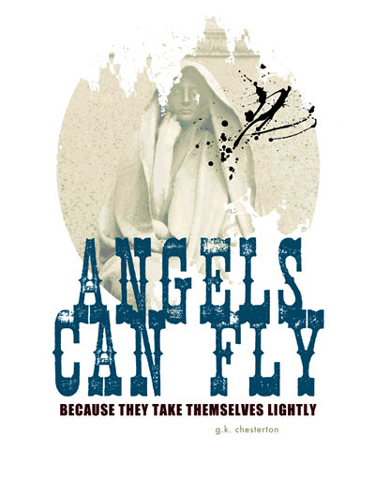