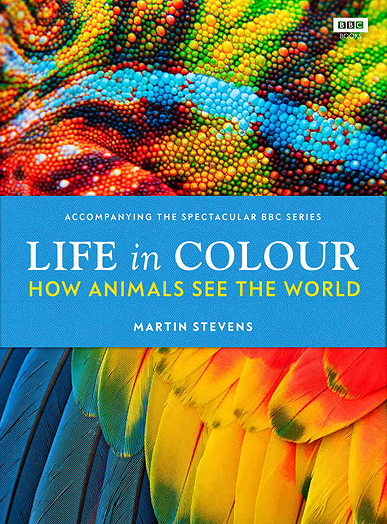 Easily, one of our favorite people is David Attenborough, whose excellent documentary films on aspects of nature we have enjoyed immensely. He will soon turn 95, yet he is still appearing in films, in some of his finest productions yet.

Most recently and of particular note is Life in Color with David Attenborough, which premiered some weeks ago on BBC, and will be streaming on Netflix as of Thursday, April 22. This new series is of particular relevance to those who research camouflage, because it uses the latest filming techniques to determine how the vision of various animals differs from that of humans. This is especially important because it has all too often been assumed that animal coloration can be adequately assessed through human vision. It is a “must see” series.

In the meantime, British zoologist Martin Stevens, whose books on animal coloration (Animal Camouflage; Sensory Ecology, Behavior, and Evolution; and Cheats and Deceits) are among the very finest, has teamed up with Attenborough and the BBC to produce a dazzling, full-color companion volume titled Life in Color: How Animals See the World.

That said, one can hardly mention David Attenborough without also calling to mind that wonderful story in his autobiography about a “colorful” appearance by Konrad Lorenz on an earlier BBC program. It is a classic, as quoted below.

[During a live interview on BBC, Austrian ethologist Konrad Lorenz agreed to appear on camera, unrehearsed, with a greylag goose. Moments later,] a keeper from the London Zoo walked on to the set carrying a goose which he put down on a low table that stood between the professor and myself. The goose, naturally enough, was somewhat perturbed at suddenly being thrust under the bright televison lights and began to flap its wings.

“Komm, komm, mein Liebchen,” said Konrad, soothingly, putting his hands on either side of the goose’s body so that its wings were held folded down. He was holding it so that its head was pointed away from him. This was sensible in that he was not then within range of the goose’s beak which it showed every wish to use, if it got the chance. But that, of course, meant that its rear was pointing towards the professor and the goose, in the flurry, squirted a jet of liquid green dung straight at him.

“Oh dear dear,” said Konrad. “All over der trouserz.” He released the goose, which flapped off the set and was neatly fielded by its keeper, took out his handkerchief and carefully wiped his trousers clean. Then, finding his handerchief in his hand, in his embarrassment, he promptly blew his nose on it.