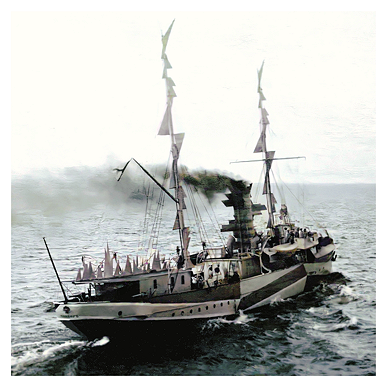 Above A vintage photograph (source unknown) of a highly unusual example of ship camouflage during World War I in which the shape of the vessel has been made confusing by applying warped perspective shapes to the bow, while also attaching triangular forms to the masts, smoke stack, and upper deck surfaces, as a means of distorting the ship’s silhouette.

Note Since this was initially posted, we have been told by Aryeh Wetherhorn that this is a photograph of a Russian patrol boat, the Kondor, in the Baltic Sea.

Everett L Warner, in Summary of Points to be Made in First Part of General Lecture on Marine Camouflage, unpublished typescript (n.d.)—

[The] British called [the] ultimate type [of WWI ship camouflage] “dazzle painting,” and this name, which we also used, was in itself a source of misunderstanding. [There was an] effort in [the US] Navy Department to find [a] more descriptive name, and to differentiate [the] American system from its British prototype. Suggestions [were] invited. Three days leave [was] offered [as a reward, but] no one secured it. One man suggested “jazz painting,” [and] I have always thought that this name summed up accurately the popular idea.

FLORIBEL’S FLAPPERGRAMS in The Lafayette Journal and Courier (Lafayette IN), May 17, 1923—

Floribel says: That jazz record on the fireside phonograph is mighty fittin’ at times. Put it on, say, when father mangles celery with unctuous enthusiasm or when he swiffles soup or swings a wicked saucer. A full-tone needle and enough jazz may help distract the awe-stricken dinner guests in the celery crisis. That same jazz may drown out the midnight racket of those dropped shoes in the parental bedroom upstairs. Any girl will tell you that when the “date” is a likely one, and a bit skittish, ‘most any household camouflage is justified, even jazz. At that, the average jazz record is no worse than the Teething-Baby Blues.

Note There are no full-color photographs of WWI ship camouflage. The original of the black and white image above has been digitally “colorized” using AI software. While its light / dark values are accurate, the choice and location of colors, even when plausible, may not be literally correct.

Under the big top at Sims' circus