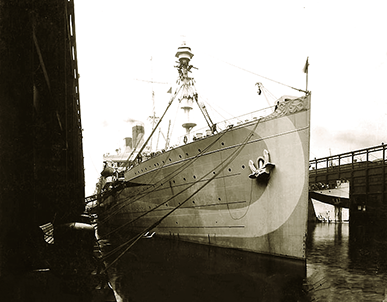 The SS George Washington was an ocean liner that was actually built by the German government prior to World War I. They named it for the first US President, and it kept that name throughout the war, although in 1917 it was seized by the US and used to transport American troops. It could carry almost 3000 passengers. When it was used by the navy, it was officially known as the USS George Washington. When used to transport army troops, its designation was USAT for US Army Transport.

The ship was initially camouflaged for the first time in 1918, in dazzle style. That formidable task was accomplished, from beginning to end, in less than a couple of weeks. Lieutenant Harold Van Buskirk, who was the executive officer in charge of the two-pronged US Navy Camouflage Section, described how that was undertaken in an article titled “Camouflage,” published in Transactions of the Illuminating Engineering Society (Vol 14 No 5) on July 21, 1919, pp. 225-229. Here is a portion of what he wrote—

On April 21, [1918], I received a request for a design for the USS George Washington, due to arrive at New York, April 27, and due to sail May 2. The blueprints of this vessel were obtained at once and outboard profiles and fore and aft elevations of the main superstructure were drawn at 1/16 inch to the foot. At the same time construction was started on a wooden model of the vessel at a scale of 1/32 inch to the foot. As soon as the drawing was completed it was sent to the US Geological Survey for copies. The model on completion was turned over to the design room. Here a design for this particular vessel was considered, tried and finally developed, with the aid of a submarine periscope looking over a false sea towards changeable sky backgrounds, which were operated from the periscope. On the sea, at a distance representing 2,700 yards or 1 1/2 miles was a turntable that also operated from the periscope. In this way, the model placed on the turntable could be observed from the periscope at various angles with varying sky backgrounds and lighting conditions. In order to obtain a veiling glare such as exists at sea due to fog, mist, smoke, etc., a movable semi-transparent mirror was mounted between the observer and the model to reflect scattered light into the eye of the observer in a way entirely analogous to the condition existing in nature. Generally, the design had been approved by the time the printed forms had been returned from the Geological Survey. The model bearing the approved design was then turned over to the drafting room where it was transferred to the outboard prints. This entire process averaged four to five days so that in this case on the morning of April 26 the design of the George Washington was mailed to the Navy Yard, New York, by special delivery and there awaited her arrival.

In this case, there are surviving photographs of the ship's completed camouflage, as shown (above and below) on this post. 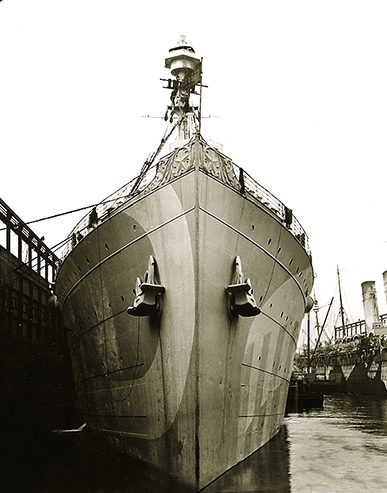 There is also a photograph of the wooden model of it that was used to test the camouflage in an observation theatre.

There is even a wonderful photograph of Lieutenant Van Buskirk and (we think) Ensign Raymond J. Richardson, originally from Reading PA, who, prior to the war, had been an architect and, after it ended, taught architecture at the Carnegie Insitute of Technology in Pittsburgh. At the camouflage facility in Washington DC, Richardson was in charge of the drafting room, where the ship plans were prepared.

A few months after the publication of Van Buskirk's article, Lieutenant Everett L. Warner (who oversaw the artists in the design subsection) published a lengthy account of the steps in the process of ship camouflage. The article, titled “Fooling the Iron Fish: The Inside Story of Marine Camouflage,” appeared in a popular magazine called Everybody’s Magazine, November 1919, pp. 102-109. He mentions the USS George Washington, in describing how wooden ship models were made—

The work began in the model-making room, where about a half dozen skilled men under Ensign Kenneth Maclntire were kept constantly busy in the production of miniature wooden models, which were accurately made to a fixed scale from blueprints of the vessels required. The reader may get a general idea of the size of these models from the dimensions of the President’s ship, the USS George Washington. It was one of the largest of them and measured about twenty-two and a half inches in length.

Warner refers to it as “the President’s ship” because on two occasions (December 1918, and again in the following March) President Woodrow Wilson and his diplomatic entourage traveled to the Paris Peace Conference on this same ship. But for those two trips, the USS George Washington was apparently no longer painted in a dazzle camouflage design.
Posted by Roy R. Behrens at 6:31 PM