William Ashley Sunday (1862-1935), better known as Billy Sunday, was an Iowa-born fire and brimstone preacher, who played professional baseball in the National League for eight years. He left that profession in 1880 to become a popular, well-known evangelist, whose eccentric preaching style was outlandishly athletic (see photos above and below). He was in part the model for the preacher in Elmer Gantry by Sinclair Lewis, and in Lewis' novel Babbitt, he was the inspiration for the boxer turned evangelist named Mike Monday, described by Lewis as "the distinguished evangelist, the best-known Protestant pontiff in America...As a prize-fighter he gained nothing but his crooked nose, his celebrated vocabulary, and his stage-presence. The service of the Lord had been more profitable."

Of Billy Sunday, the poet Carl Sandburg wrote: "You come along squirting words at us, shaking your fist and calling us all damned fools so fierce the froth slobbers over your lips...always blabbing we’re all going to hell straight off and you know all about it...Go ahead and bust all the chairs you want to. Smash a whole wagon load of furniture at every performance. Turn sixty somersaults and stand on your nutty head. If it wasn’t for the way you scare the women and kids I’d feel sorry for you and pass the hat. I like to watch a good four-flusher work, but not when he starts people puking and calling for the doctors." 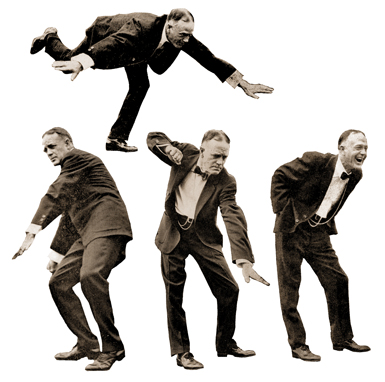 Sunday also wrote a syndicated newspaper column, a newsprint homily of sorts, in one issue of which he warned about the evils of camouflage. It makes sense. What better practitioner of duplicitous sales and deception?

Billy Sunday, THE ART OF CAMOUFLAGE, in The Delphi Journal (Delphi IN), December 9, 1920—

There's a Lot of Chatter, these days, about Camouflage! When your Uncle Bill first Harkened to the Word, he thought it was a New French Dish, probably Cooked in a Casserole, and, being the Kind of Geezer who will Try Anything Once in the Line of Eats, he came Pretty near Ordering it from the Dinge in the Diner.

But Camouflage is not that Sort of Thing, it Seems.

It is the Military Art of Kidding the Enemy—of making things Look like What they Ain't, so to speak!

The French Rig Up an old Tree to Pass for a Cannon, and let Fritz waste his Ammunition on This, while a Little Way down the Line, the Real Seventy-five is Blazing Away from what Appears to be an Innocent Domicile.

They can even Paint a Dummy Bridge on Canvas and Stretch it Across the River, and Fake a Rippling Stream to cover the Real Bridge, and Bunk the Flyers who Lamp it from Above.

As a Military Art, Camouflage is a great  thing!

But there is altogether Too Much Camouflaging being done in Ordinary Life. The Dame that Sails down the Boulevard in a Get-up which is the Last Holler in Vogue—and at the Same Time is Skinning Down on the Old Man's Bats, at Home—is practicing Camouflage.

And the Young Buck who Dolls Up like a Million Dollars and has Little More than the Return Fare in his Jeans, he's Trying the Art, too.

But Worst of Them All is the Old Deacon who Sits in the First Pew on Sunday and Pipes Up Strong in the Hymns and on the Amen Stuff, and then spends the Rest of the Week in the Gentle Game of Nicking the Poor Widow for Twelve Per Cent, on the Loan.

There are Enough Experts on Camouflage of This Sort in the USA to equip a whole Army Corps on the Western Front.

But they don't Get Away with it for Very Long. The World gets their Numbers, and the Big Guns of Honesty and Common Sense soon Shoot them to Pieces.

Leave Camouflage to the Military Men, where it Belongs and Does Some Good!

If you're only an Old Log, don’t Pretend you're a Rapid-Fire Field Gun!

Develop yourself, and Maybe you'll Get to Be One. Don't put yourself Higher up the Tree than you Belong, for there's Bound to Be a Fall—and usually with an Awful Bump.