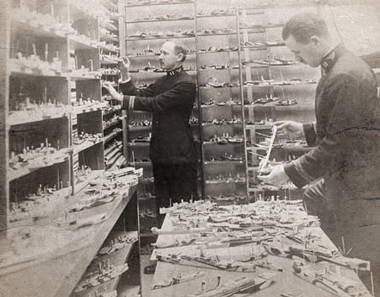 
A corner of the model room of the camouflage section of the [US] Navy Department. Scale models of every type of vessel, decorated with the weirdest of designs, are kept here for test and experimental purposes. It is easy to imagine what undoubted joy would be Young America's were he once let loose in this toy shipyard.

The person on the right is Harold Van Buskirk, the executive officer in charge of the Camouflage Section (which had two branches), while on the left is Everett L. Warner, who headed the Design Subsection in Washington DC. It was the Navy's responsibility to provide the camouflage designs for all American ships, both military and merchant, the plans for which were then sent out to teams of artists assigned to dock officers (called District Camoufleurs) at coastal harbors throughout the country. The District Camoufleur for Brooklyn NY was muralist William Andrew Mackay. Only recently, we discovered the following article from 1919, in which he is interviewed at length about his work as a camoufleur. [The photos on this blog post were not part of the original article.]

Two months earlier, the following article, written by Otis Peabody Swift, was published in the New York Evening World Daily Magazine (March 6, 1919) with the headline HOW A NEW YORK ARTIST, WITH TOY BOATS, WORKED OUT CAMOUFLAGE TO FOIL U-BOATS: In William Andrew Mackay's studio, sixty men under his direction worked night and day on designs of the United States Shipping Board, using diminutive models [like those shown here].


Now that the war is over many "mystery stories" of the war can at last be told. Perhaps one of the most interesting is the story of camouflage, the weird painting of seagoing ships that baffled and defeated the sea wolves of the submarines.

Camouflage, as developed in this war, is a product of American study and imagination. It is largely the result of the work of William Andrew Mackay, the New York artist and interior decorator, who for five years before the war experimented with the idea of protective coloration for American battleships. And the success of his plan is shown by the fact that of the 749 American vessels camouflaged according to the designs of the United States Shipping Board, supplied by the navy, only seven were sunk.

It was in the big studio workshop of the Mackay School of Camouflage at 345 East 33rd Street [in Manhattan] that the camouflage idea was developed. Here sixty men worked day and night disguising the American ships.

Along the walls of the big studio hang marine background paintings, showing the various color tints of the oceans. There are the long gray green wave of the North Atlantic, and the violet fog of the [English] Channel. There is the deep warm blue of the Gulf Stream, and the muddy brown of the Gironde delta. Against these backgrounds the camouflage effects were tested. Over in a corner stands a real periscope, manned by Skipper Mackay. And on tables, chairs, racks and shelves are dozens of nine- and ten-inch wooden models of merchant ships, awaiting their coat of camouflage. 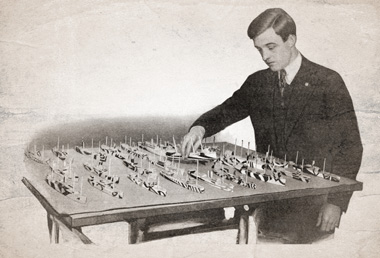 When a vessel was to be camouflaged a wooden model was first made up of the ship, exact in every detail. Then different types of camouflage were applied and tested through the periscope against the different marine backgrounds. It was the old sport of playing boats. Famous artists and architects, students in the school, sailed their toys across the maneuvering boards. There were over a hundred of these little ships, and they formed a navy that would delight a youngster's heart. Then when a satisfactory design, one well fitted to that particular vessel, had been decided upon the plans were sent to the shipyard or dry-dock, where the actual camouflage would be applied.

"Yes, this looks like a deserted battlefield to me," said Mr. Mackay at the studio yesterday. "It was here that the first work of camouflage was developed. In all, 749 vessels were camouflaged, and sixty men, artists, architects and designers, made this shop their headquarters, under direction of the United States Shipping Board, working over designs, testing colors, peering through the periscope at the wooden models, and then dashing off to try out some few effect on the vessels that, in a few days, would be depending upon our skill in the art of disguise to save them from the U-boats.

But let's go back to the beginning. Caesar invented camouflage. His tiriemes that sailed north to conquer the red-haired Britons were all painted green, and his crews were ordered to wear green suits to make them less visible. In Macbeth we find the soldiers carrying trees to conceal themselves on that day when Birnam Wood came to Dunsinane. But modern camouflage, as developed by the war, is the product of American study.

Seven years ago, when I was at Newport, I read a volume by Prof. Ogden N. Rood of Columbia University entitled Modern Chromatics. He pointed out that the gray of nature—the sky, rocks and trees—is a combination of red, green and violet. It then occurred to me that by blending these colors I might evolve a battleship gray that would make our dreadnoughts less visible. Commander J.O. Fisher, USN, had been working along similar lines at the Brooklyn Navy Yard. Together we experimented in 1915 on American submarines at the Brooklyn Navy Yard. We painted them in stripes and bars, and there evolved the first principles on which modern camouflage is based.

When the United States entered the war I placed the results of these experiments before the Navy Department. I privately undertook to camouflage American merchant vessels, and also opened the Mackay School, where fifteen camoufleurs were trained for the navy. Then I was appointed District Camoufleur by the Shipping Hoard, and the big job began. Plans were supplied by the Shipping Board, and new types of camouflage were worked out at their Washington headquarters.

There was nothing haphazard about the art. Every ragged line, every crazy angle, jarring color, had a meaning. First you must understand that there are really two kinds of camouflage. There is the camouflage which attempts to make a boat less visible, and thereby permits it to escape the enemy, and that camouflage which, although the boat shows up plainly, deceives the enemy as to the course, speed and identity of the craft. The most successful method was a combination of both forms.

In England Commander Wilkinson RN had been working on the idea and had developed the dazzle system. This consisted of large black and white figures. It dazzled the sub. He could see the boat, but he couldn’t place his shot. There were just as many subs, and they saw just as many British boats, but they couldn't hit them. Before the camouflage was put on the Germans got fifty boats a week. Afterward the average was ten boats a week.

Here in the States we combined the dazzle idea with low visibility. There were many tricks to the trade. You see the subs would shoot up their periscope and got a look at the ship. They based their mathematical calculations on what they saw in that moment's glance. We painted a false bow wave along the side of the ship, which, by foreshortening, made the vessel seem farther away than it was. We broke down all vertical lines, destroying the ship's silhouette by which they ascertained identity. We painted on the false bow lines which her appear to be going in another direction. 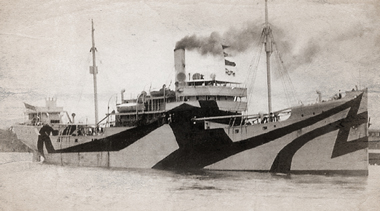 Above The top photo is a plaster unpainted model of the SS Baxley. According to other sources, ship models for this purpose were usually made of wood. The bottom photo is the actual ship after its camouflage scheme was applied.

From time to time other more spectacular methods of camouflage were adopted. The Von Steuben came into port one day with a destroyer painted on her side. Other vessels painted SC [submarine chaser] boats on their sides, some painted superimposed bows on their sterns so you couldn't tell which end was which. Of course the cubist artist hailed camouflage as the logical development of beauty and art, and said that from now on all ships and houses and automobiles ought to be decorated that way. But camouflage was purely utilitarian—we forgot the artistic part. We didn't care how the ship looked if it could dodge the submarines.

And they certainly did. It was so successful that we took to camouflaging SC boats, seaplanes and even houses and barracks on land where there was danger of air raids—as at Porto Corsino, Italy, and Dunkirk. The Germans got the idea and camouflaged their submarines, and camouflage got into vaudeville and the dictionary. Well, it's all over now. The ships are coming up the bay in their peacetime paint, and all the checkerboard ships and the Welsh rarebit decorations are a thing of the past. The big point is that it did the work. Of the 749 boats that were camouflaged in the second district only seven were sunk.”

Today Mr. Mackay is packing up the toy ships of the 33rd Street studio and is sending them to the Brooklyn Museum, where with the periscope and the deep sea background, they will afford the public an idea of how a wartime convoy looked at sea. And he is going to his bungalow at Coytesville, NJ, just atop the Palisades [Park], and forget all about ships while tramping round the woods with Patricia Mackay, aged seven, who has a toy boat collection that is the envy of every youngster in Jersey.