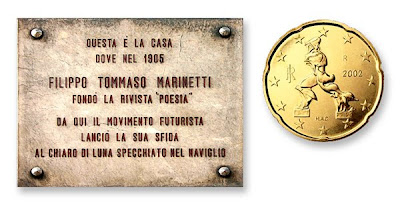 The Italian-based artistic, literary and social movement called Futurism (founded c1909 by Filippo Tommaso Marinetti) was in part an equivalent to French Cubism. It is also commonly said that Vorticism (founded by P. Wyndham Lewis and Ezra Pound) was a British variant on Cubism and Futurism. Vorticism is often described as having been linked with World War I British ship camouflage because one of its prominent members, Edward Wadsworth, was a dock officer who supervised the application of dazzle patterns (although it is unlikely that he himself designed such schemes). After the war, he commemorated dazzle painting in a painting and series of woodcuts.

In a typically cryptic statement, Marinetti contended that the Vorticists had appropriated Futurist motifs, without attribution, for use in dazzle camouflage. Here is an excerpt from that text in Marinetti's "Aggressive Noisiness and Russolo's Noise Machines" in R.W. Flint, ed., Marinetti: Selected Writings. NY: Farrar, Straus and Giroux, 1972, pp. 335-337—

In London where the English Futurist painters [C.R.W.] Nevinson Wyndham Lewis Wadsworth have distinguished themselves for their proposal to camouflage ships by using dynamic Futurist color patterns by that genius the Roman Futurist Giacomo Balla there took place before and after the concert other furious fistfights and encounters that didn't stop me at all but rather were inspiring as I dared explain even though I didn't know English and pronounced the few phrases I did know badly to the rich and well-educated London that mattered persuading them with gestures that they should respect Luigi Russolo's talent…

Shown above are (left) a plaque on the house of the founder of Futurism, Filippo Tommaso Marinetti, in Milan, Italy (public domain image); and (right) an Italian Euro coin showing the Futurist sculpture Unique Forms in Continuity of Space by Umberto Boccioni (1913).
Posted by Roy R. Behrens at 9:11 AM