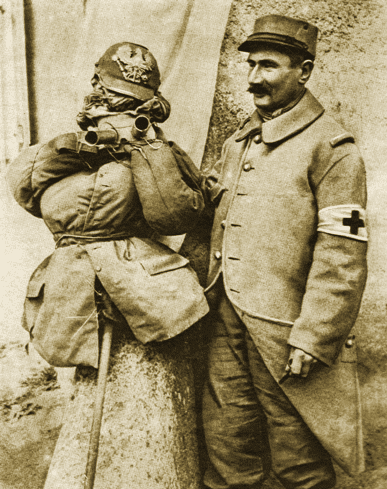 This is one example of the use of the same camouflage trick by the two opposing sides during World War I. Snipers stationed at the front were poised and ready to shoot at anyone in the enemy’s trench who was foolish enough to look over the edge. As a result, both sides made dummy imitation soldiers’ heads (made of papier-mache or plaster), which were mounted on sticks and held up above the top of the trench.

If the dummy was shot at, it might enable the targeted side to determine the sniper’s location. This public domain photograph, which was initially published in Le Miroir on January 28, 1917, shows a French Army corpsman examining a captured German version of a dummy trench observer (complete with a German helmet and duplicitous field glasses), mounted on a wooden stick.
Posted by Roy R. Behrens at 5:22 PM