Dust to dust / Dali, skulls, and reminders of death

Ten years ago, we blogged about an American illustrator named C. Allan Gilbert (1873-1929), who was also an early contributor to animated films. Unfortunately, if and when he is remembered, it is inevitably because of the continuing popularity of one of his illustrations, a memento mori (reminder of mortality) titled All is Vanity (1892). It is a double image or visual pun in which the scene of a woman admiring herself in a mirror appears instead to be a skull when viewed from a greater distance. During World War I, Gilbert was also among a number of US artists who worked for the US Shipping Board (the Emergency Fleet Corporation) in applying dazzle camouflage to US merchant ships.

Gilbert's skull illusion is skillfully made and undoubtedly deserving of its popularity. But it is somewhat less than original. Throughout history, there have been repeated attempts at designing scenes of daily life that, from a distance, change into icons of death. Below is an example of one made by a German artist in 1866, in which two young people take on the shape of a skull when viewed from a distance. When translated, the label beneath the image reads "blood and decay." The Spanish surrealist Salvador Dali alluded to the same symbolism when he devised a "double image" (in a 1940 painting called Slave Market with the Disappearing Bust of Voltaire) that at first appears to be a bust of the French philosopher Voltaire, and then, at other times, perhaps an image of two nuns.


And at last, below is another example, also German, from the 19th century. 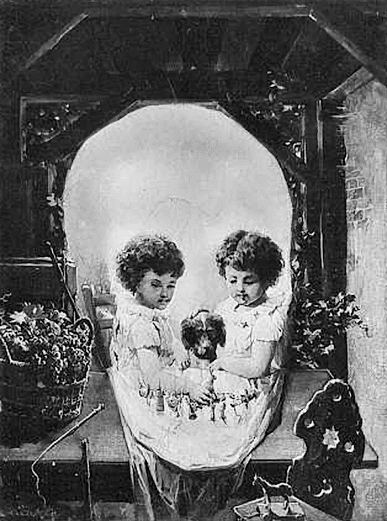