During World War I, one of the fastest, most effective ways to send a message was the use of homing pigeons, who reportedly succeeded at a rate of 95%. More than 100,000 pigeons were used on the battlefield in France. They were housed in camouflaged transport vehicles like the one shown here, vans that had been adapted to serve as pigeon roosts.  Of course, this led to spurious claims that, if the camouflage was too effective, it would prevent the birds from finding the roost.

For example, the following comment appeared in Eva March Tappen, The Little Book of the War (Boston: Houghton Mifflin, 1918), p. 76—

"Landscape painters were called upon to help in the camouflage, and airmen sailed aloft to see how well they had succeeded. One succeeded altogether too well, if we may trust the story, for he camouflaged so perfectly the van in which homing pigeons had been brought that on their return they did not recognize it."

Below is another camouflaged pigeon roost from the same era. It's a non-motorized wagon, and its camouflage is different from the previous example. In this case, the wagon has been painted to match the stone wall, fence and shrubbery in the background. 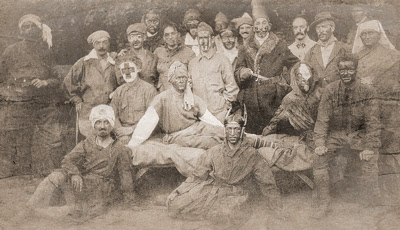 Regrettably we don't know the source of this photo. I found it several years ago, and have since misplaced the notes. I remember that it was taken in France (c1918), and that the group of people shown are army camoufleurs, either American or French, or (more likely) a mixture of camouflage artists from both. The odd thing of course is how they are dressed. These are "camouflaged camoufleurs," dressed up for a costume party, a masquerade.The face of one person (standing center, middle row) is painted like an American flag, while another (seated, to the left) looks like the Red Cross. The seconded seated person from the right is wearing an unusually disruptive design (not unlike dazzle ship camouflage). Inevitably, there are themes related to race—on the far right is a seated man in blackface (as was typical of minstrel shows), and in the center on the ground is someone in Native American garb.

During WWI among GIs in France (not just the camoufleurs), it was common to organize masquerades and other costumed events and performances for the white Army "doughboys" (the US Army was not yet integrated, so Black soldiers were in separate units). Recently, I found a book on Entertaining the American Army: The American Army by James W. Evans and Garder L. Harding (Association Press, 1921), in which the costumes are described as follows:


"Many of these garments were contributed by actors and actresses back in the States. Winthrop Ames [a Broadway producer who organized an Over There Theatre League] sent over twenty-six trunks of costumes in June 1918. Here were Indian outfits, period robes, Uncle Sam suits, cowboy rigs, hoopskirts—everything a khaki actor might require.

Appeals for supplies were varied. Negro wigs were unknown in France until the doughboy came, and thousands had to be brought over, enough to camouflage an army corps. Letters like this would come in: 'The Machine Gun Company wants six ukuleles, three bass viols, twenty wigs, lots of grease paint, and six pairs of bones, and the Colonel says the "Y" [YMCA] will send them. We've got the greatest [N-word] show on earth!'" (pp. 171-172).

According to The Chronological History of the Negro in America, by the end of WWI, 367,000 Blacks had been drafted, thus representing 11% of the ground forces who fought for American freedoms in France. Back home in 1918, 58 Blacks were lynched that year, up from 38 before.
Posted by Roy R. Behrens at 3:26 PM


American artist and teacher Kimon Nicolaides (1891-1938) is best-known as the author of a famous drawing textbook, The Natural Way to Draw (Boston: Houghton Mifflin, 1941). But he was also an American Army camoufleur during World War I.

From "Heard and Seen" in the Washington Times, February 17, 1919 (editorial page): "Sergt. Kimon Nicolaides, camoufleur, is here again. He is studying art."

Born in Washington DC, Nicolaides' father was a Greek-born importer of Oriental artifacts, while his mother's ancestors can be traced to the US Colonial period. As a young man, he earned money by framing pictures, writing newspaper articles, and playing the role of an art student as an extra in a film. He studied drawing at the Art Students League with George Bridgman and John Sloan.

When the US entered WWI, Nicolaides volunteered for the American Camouflage Corps. He served in France for over a year, for which he received a citation. One of his wartime duties required the study of geographical contour maps, an experience that may have influenced his use of 'contour drawing' as Exercise One later in his drawing book. He died before the book came out. Its completion and publication were overseen by a devoted former student, Mamie Harmon, whose papers are in the Archives of American Art.
Posted by Roy R. Behrens at 7:54 AM

To my mind, this is one of the most exquisite illustrations of camouflage, as practiced during World War I. It's one of a series of colored lithographs that appeared initially in La Guerre Documentée (c1920).

It represents three stages in the application of disruptive camouflage. In the top, there is no disruption since the truck is painted in monochrome gray (in a manner not unlike the use of battleship gray in ship camouflage). In the second stage, disruptive shapes have been applied that contradict its physical shape. And then, in the bottom image, the truck has been placed in a setting in which it is not only visually broken apart (high difference) but aspects of its pattern blend (high similarity) with various parts of the background.

The gestalt psychologists' term for this was an embedded figure. In his famous book, Adaptive Coloration in Animals (1940), British zoologist (and military camouflage instructor) Hugh B. Cott talked about the combined use of blending and disruption in the coloration of animals, as when a frog folds up its legs, and connecting patterns link its limbs. Much earlier, American artist Abbott H. Thayer had described the same phenomenon (in Concealing Coloration in the Animal Kingdom (1909)), but it was Cott who came up with a suitable name—he called it coincident disruption.
Posted by Roy R. Behrens at 2:48 PM


Of late, we've been trying to find information about a little-known American artist named Robert (Bob) Webb, Jr. (1897-1987), who apparently served as a ship camoufleur during World War I.

He is interesting for other reasons as well: It seems that he assisted John Singer Sargent (by preparing the paints) when, in 1915, that artist was commissioned to paint a mural (The Triumph of Religion) for the Boston Public Library. According to Webb, he learned from that experience but Sargent paid him not a cent. After World War I, he moved to Florida, where he worked with other artist-designers in decorating the elaborate interior of Ca d'Zan (Venetian dialect for "house of John"), the palatial winter home of John and Mable Ringling (of Ringling Brothers Circus fame) in Sarasota. Decades later, in the 1960s, Webb returned to Florida to participate in the restoration of that mansion, now part of the Ringling Museum of Art. He also worked for Colonial Williamsburg for more than twenty years.

One of the sources I've found thus far is a 204-page book about Webb's life, titled Tramp Artist: The Life of Robert Webb Jr., compiled by his daughter, Thelma Webb Wright, and published in 2003. It features reproductions of numerous works (paintings, interior crafts and Williamsburg signs) and extended excerpts from his tape-recorded memories. The book is largely a tribute to Webb and his first wife Rosa (the author's mother), who died in 1974. I've also found an online source (dated 1999) that's also credited to Thelma Webb Wright, who was apparently at the time a volunteer at the Ringling Museum. A third source is a recent 312-page alternative biography called Apprentice to Master (Trafford Publishing, 2010), written by Webb's second wife, Katheryn Webb, whom he married in 1976.

Regarding Webb's service as a World War I camouflage artist, the two authors (combined with Webb's transcribed account) provide somewhat different narratives. According to the Wright biography, Webb enlisted in the Navy in 1918. Soon after, he was assigned to camouflage in Norfolk as a result of having been recommended for that by Webb's mentor, Massachusetts artist Frederick Mortimer Lamb (1861-1936) and Sargent (the two had met as students at the Académie Julian in Paris) . His commanding officer was Lieutenant-Commander Nathan Bushnell, who (according to Webb's first-person account) "was in charge of all camouflaging for the Navy" (this is contrary to anything I've ever heard) and was also the Chief of Naval Intelligence.

This is Webb's description of how he designed ship camouflage: "My buddy and I used to take photographs of the ships that were not camouflaged… Using the photos as a guide, we'd cut a silhouette out of masonite… I'd make the designs on the sides of the ships, and these other guys would color them in. …[You couldn't actually hide a ship] So I figured the only thing to do with them buggers is to fool them. So I'd paint a submarine on the side of the ship, and I'd write all kinds of cross lines, circles, everything, so they [the German U-boat commanders] couldn't get a line on it. The front of the ship, I'd paint a bow on it. I'd paint another bow, so when they come up she'd be going the other way" (Wright, pp. 14-15).

Wright's book cites another source, an article in the Virginia Gazette (Williamsburg), on April 12, 1986, in which Webb is quoted as follows: "Typical [camouflage] designs were angles and circles. I even painted a submarine on the side of one ship. Colors made no difference as long as they were strong, like dark blue, black or yellow. We made the craziest ships you ever saw in your life." Wright also notes that, years later, when the US entered World War II, Webb attempted to revive his ship camouflage efforts: "[He] had several dozen plywood silhouettes of ships cut and proceeded to paint camouflage designs on them… When he learned about radar and sonar, he said in disgust, 'The Navy used to have iron men and wooden ships, now they have wooden men and iron ships.' His wooden ships became kindling" (p. 18).

In Apprentice to Master, Webb's involvement in ship camouflage is discussed in greater detail. According to that author, Sargent was approached by Rear Admiral William Sims (head of the US Navy), who explained that "a new service was being set up within the Navy that would use art to protect troops, cargo and battleships from enemy torpedoes. It would be called a 'camouflage department.' The secretary asked Sargent's opinion as to what qualifications the men should have who would staff the new department… Sargent, in answering the Secretary of the Navy's request for qualifications of men to fill this roll as camouflage artists, proposed that his young friend Robert James Webb, Jr., be put in charge of the new department! Bob could set the standard for all the other recruits to the new camouflage department. Sargent offered to write Bob Webb a recommendation, which he did, there at the dinner table" (pp. 61-62).

Elsewhere in the same book, it is stated that Webb was "put in charge" of Navy camouflage (p. 83), that he served as  "chief camouflage artist" (p. 93), and that "The camouflage work he did…was unique and copied throughout the Navy" (p. 187). In the online book description at Amazon, an even stronger claim is made that Webb "went on to become the first camouflage artist in the Navy during WWI." Having researched and written about art and camouflage for forty years, I am astonished to learn this now. In all those years, I've never heard of Robert Webb, Jr., and I don't know any other source that claims he played such a prominent role in WWI naval camouflage. Needless to say, the search goes on.