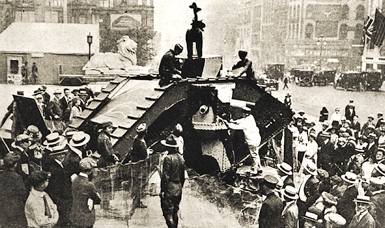 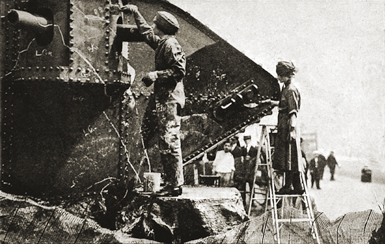 Above and below are public domain news photographs (1918), showing members of the Women's Reserve Camouflage Corps applying dazzle camouflage to a tank that has been placed in front of the New York Public Library. In the first photograph, the high contrast disruptive shapes are beginning to be evident. In the photo directly below that (apparently taken earlier), one of the tricks of the trade is revealed: they are marking in the boundaries of the colors with white chalk, a method that was commonly used by the teams who painted camouflaged ships.

In war work, as in nature, there are two kinds of camouflage coloration: one is designed to make the camouflaged object harder to distinguish from its surroundings, the other to make it even more conspicuous than it would otherwise be. The latter, however, in war work is restricted to objects used for recruiting purposes. The ocean-going freighters at anchor in the North River, off Manhattan Island, or in any other large harbor, are examples of the first kind. The [object in the three photographs shown here] is an example of the second, undergoing its camouflage painting at the hands of members of the Camouflage Corps of the National League for Women’s Service.

The tank stands in front of the New York Public Library. The young women at work in overalls are making its surface a crazy-quilt of the most violent and incongruous colors imaginable—colors that command the attention of every passer-by. The object is to aid recruiting for the tank service.

The effigy topping the tank’s turret, which seems to be a cross between a puma and a Teddy bear, was put there to make it harder—to overlook the tank.

The National League for Women’s Service has recently inaugurated a Woman’s Reserve Camouflage Corps. Although the course is unofficial, it is the aim of the corps to be of service to the Government at home and abroad. This division of women’s service is yet too young to have accomplished notable results, although they have helped, under Henry Reuterdahl’s supervision, in painting the land battleship Recruit in Union Square, camouflaged the tank in front of the Public Library, New York City, painted trench tables so that they look like the land and shrubs all around them, and painted snipers’ suits for men to wear when creeping among the rocks and bushes. 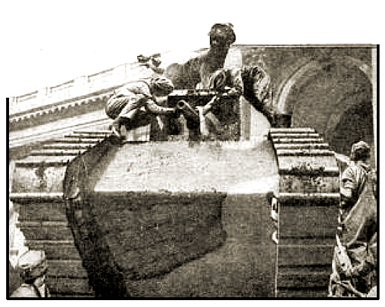 Above and below Views of World War I-era cleverly modified roadsters  designed by Conover T. Silver (C.T. Silver Motor Company, New York), for patriotic postcard use (below), and later, during Prohibition, as promotional advertising for “near beer” made by Anheuser-Busch (above).

Auto thieves are reaping a bountiful harvest all over the middle west this year. Over 2,000 cars were stolen in Iowa alone during 1917, and the operations of card bandits during the first half of this year indicate that their total steal for 1918 will far exceed last year’s record.…

According to the authorities, there are today half a dozen clever gangs operating in Iowa for the sole purpose of stealing autos. Their ingenuity in making away with machines, and then disguising them so that they cannot be recognized, is said to be almost beyond belief.

One pair of bandits, still at large, has a trick of getting away with a car that is real camouflage. The pair drive up in greasy mechanics' overalls, approach a car, parked in front of a building or garage, and commence to tinker with the engine. For several minutes they work industriously at their apparent task. Then they jump in the machine and ride away. Even the most suspicious person would mistake the pair for a couple of mechanics assigned to look over the auto in question.

…After the pair get out of town with the machine they usually take it some place to have it repainted. The license number is changed, and the stenciled number on the engine block ground off, and a new number put on.

The up-to-date [auto] thieves operating in Rochester NY drive their loot out into unfrequented parts of the country, run the car in a field and camouflage it to resemble a broken down shed, hay stack or pile of brush. The police have recovered a number of these camouflaged cars since the scheme was discovered through a confession.…

John G. Williams, an Omaha NE pioneer, at a meeting of the Nebraska Roads Association, called to discuss the passage of the anti-auto-theft law, “with teeth in it,” recommended hanging as a punishment for auto stealing. “If we string up a few of them it will discourage the others,” he said. “It discouraged the horse thieves in the old days,” he said.