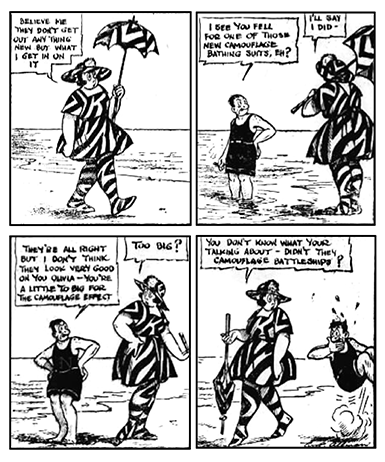 You may recall earlier posts that included photographs and news reports on scandalous dazzle-camouflaged bathing suits (see below) that began in the UK at the close of World War I, then spread to the US and elsewhere. We've now located an American newspaper cartoon on the same subject (reproduced above). Created by Walter R. Allman as part of his series called DOINGS OF THE DUFFS, it appeared on page 4 of The Palm Beach Post on August 20, 1919. It shows a woman dressed in the same kind of striped bathing suit that had been sighted on the beach.
•••
William Edward Ross, “America’s Pledge to Humanity’s Cause” in The National Magazine. Vol XLVII No 7 (June 1918), p. 326—

The sudden importance of everything attached to ships has resulted in many new devices for their protection, and perhaps no word coined during the present war has sprung into such instant popularity as the term “camouflage.” Born of necessity, its particular appeal to the need of the hour has rendered it extremely expressive. The general definition of “camouflage” is to deceive the enemy through some subterfuge which leads him to believe that what he sees is not what it is. It has proven one of the most valuable adjuncts to present war tactics, as applied to naval and merchant marine disguise.

The artists assigned to the camouflage work have a well-appointed studio and theatre [which simulate] conditions that the ships will experience on the ocean as portrayed. It is their duty to devise ways and means, as well as do the actual work, to disguise these vessels in such a way that they will be almost indistinguishable.

Records received from the British Government indicate that camouflage is working even more successfully than was believed possible. A recent test was made when a camouflaged British ship was fired at with blank torpedoes, and the submarine captain insisted that he had made the best shots he had ever made, but the men on the camouflaged vessel hardly knew they were being fired at, the shots went so wide of the mark. On another instance, two vessels were passing each other, one camouflaged, the other au natural. One captain figured that their courses were going to meet. He blew his whistle to signal change of course. The first vessel paid no attention to his signals, and he began to notice that the thing was sliding sideways. They passed about a quarter of a mile apart, although the captain would have sworn the camouflaged ship was coming directly toward him. The entire system is simply a matter of physics and optical illusion. It is what the British call the “dazzle system,” and, when several duly camouflaged ships are passing by in Hampton Roads, it resembles nothing so much as a futurist painting—a conglomerate mass of phantom shapes. The use of camouflage and its value as a protective force furnishes an apt paraphrase on a prominent quotation, namely, “The hand which wields the paint brush saves the ship.” 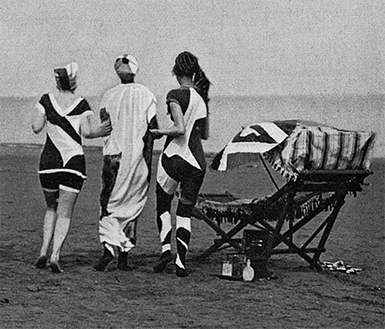 Above A new exhibition will open October 7, 2017, at the Maine Maritime Museum in Bath ME. On the exhibition web page is a detail of a painting by Burnell Poole (1918) of two dazzle-painted ships, in which the USS Leviathan (in the background) is being escorted by the USS Allen, a destroyer. The exhibit will continue through June 10, 2018.
Posted by Roy R. Behrens at 10:22 AM

Above Hypothetical dazzle ship camouflage schemes (2017) devised by Roy R. Behrens by isolating a single detail from each of various paintings, made by artists from the past (only one artist appears twice).

Margaret Vandenburg, An American in Paris: A Novel. San Francisco CA: Cleis Press, 2001, an excerpt from a fictional conversation between Pablo Picasso and Ernest Hemingway——

"My ambition is to render reality, which is itself a form of autobiography, with unwavering precision," said Picasso.

"How can you say that when your work is often so abstract?" Hemingway asked.

"But what about your theory about camouflage?" Hemingway insisted. "How the camouflage of each country is different, and how the subtle differences are the signatures of each nationality? And that camouflage itself proves the organic inevitability of modern abstraction?…"

…I was in Europe many years ago with Ernest Hemingway. Hemingway had just written his first novel, and Gertrude Stein and I read it, and we said that is was a good novel, but not a great one, and that it needed some work, but it could be a fine book. And we laughed over it. Hemingway punched me in the mouth.

That winter Picasso lived on the Rue d'Barque, and he had just painted a picture of a naked dental hygienist in the middle of the Gobi Desert. Gertrude Stein said it was a good picture, but not a great one, and I said it could be a fine picture. We laughed over it and Hemingway punched me in the mouth.

Francis Scott and Zelda Fitzgerald came home from their wild new years eve party. It was April. Scott had just written Great Expectations, and Gertrude Stein and I read it, and we said it was a good book, but there was no need to have written it, 'cause Charles Dickens had already written it. We laughed over it, and Hemingway punched me in the mouth.

That winter we went to Spain to see Manolete fight, and he was... looked to be eighteen, and Gertrude Stein said no, he was nineteen, but that he only looked eighteen, and I said sometimes a boy of eighteen will look nineteen, whereas other times a nineteen year old can easily look eighteen. That's the way it is with a true Spaniard. We laughed over that and Gertrude Stein punched me in the mouth.

Above Hypothetical dazzle ship camouflage schemes (2017) devised by Roy R. Behrens by isolating details from four areas of a single painting by a famous artist from the past. Can you name the artist?

But the houses he [Le Corbusier] designed [during the late 1920s] were quite different—an attempt to create a Cubist framework for everyday life. They were color compositions without weight, just as intangible as the camouflage ships [in WWI].
Posted by Roy R. Behrens at 2:34 PM