Above In earlier posts, we've noted the involvement of American Regionalist painter Thomas Hart Benton (see portrait below) in World War I camouflage. While he served in the US Navy, he did not design ship camouflage. Instead, his assignment was to travel around the bay at Norfolk VA, and to make visual records of the camouflage designs of any ships that he observed, including those of other countries.The page above is a record of one of those sightings, including full-color renderings of the camouflage schemes on both sides of the SS Alban (dated October 30, 1918).

[There is] an amusing story of the [Taliesin] Fellowship's overnight stay at the Benton home in Kansas City, on the way [from Spring Green WI] to camp [at Taliesin West in Arizona]. All the boys [sans F.L. Wright, who made the trip separately], including the short, square, black-moustached Thomas Benton had imbibed freely. While he swung in wide arcs from a swing with 25-foot long ropes, the boys stood on the porch singing to Kansas City till the wee hours Palestrina, Bach, spirituals, and folk songs. Then he and his sons entertained them with chamber music composed of harmonicas and recorders.

In the new book on Frank Lloyd Wright and Mason City: Architectural Heart of the Prairie (2016), there is a discussion of the connections between Wright's architectural style and Benton's approach to painting. 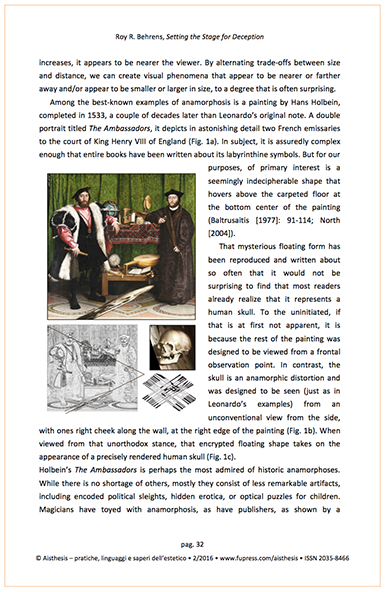 Above Only a few days ago, an essay that I recently wrote on forced perspective (commonly used in stage design and museum dioramas) and World War I ship camouflage has been published online at the website of Aisthesis (an Italian journal published by the Firenze University Press), where it can be read online or downloaded as a pdf.  The essay, titled "Setting the Stage for Deception: Perspective Distortion in World War I Camouflage," appears in the current, special issue on Mimicries in nature, art and society. Vol 9 No 2 (2016). 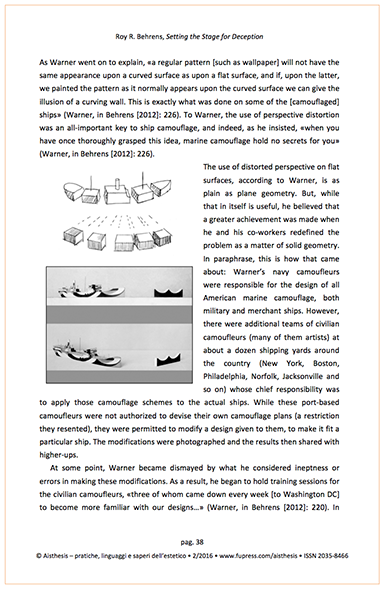 Above Forty-five years ago, when I first published articles on art and camouflage, no one was even remotely interested. Now it seems as if everyone is researching camouflage, even hip hop. It's been a long and often enlightening search.

More than two years ago, in a blog post about World War I American artist Frederick Judd Waugh (1861-1940), we reported on his camouflage plan for the USS Proteus, a cargo ship for carrying coal. We included two photographs at the time, one showing the painted wooden ship model (reproduced below), as prepared by Waugh, the other a view of the actual ship after the scheme had been applied.

More recently, we have located another photograph of Waugh's model (above). It shows Everett Longley Warner (Waugh's immediate supervisor) standing beside an observation theatre, used for testing ship camouflage plans. The ship model has been placed on a circular turntable that can be angled at any degree. Also evident is a painted backdrop on a roll of canvas, which allows the background to be changed, to simulate various weather effects.