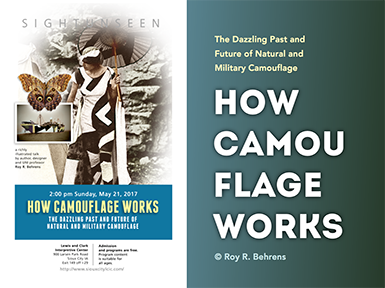 Above Don't miss the upcoming public program on HOW CAMOUFLAGE WORKS: The Dazzling Past and Future of Natural and Military Camouflage.

Free and open to the public, it starts at 2:00 pm tomorrow afternoon, Sunday, May 21, 2017, at the Sioux City Lewis and Clark Interpretive Center / Betty Strong Encounter Center. It's an excellent educational facility at 900 Larsen Park Road in Sioux City (Exit 149 off I-29).

Roy R. Behrens, Professor of Art and Distinguished Scholar, teaches graphic design and design history at the University of Northern Iowa. He is internationally-known for his publications about art, design and the history of camouflage. The author of eight books and hundreds of published articles, he has appeared in films and interviews on NOVA, National Public Radio, 99% Invisible, Australian Public Television, BBC and IPTV. His most recent book is Frank Lloyd Wright and Mason City: Architectural Heart of the Prairie (2016). 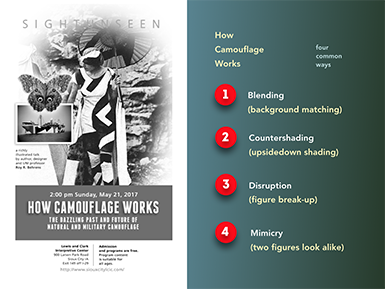 …natural selection has produced highly camouflaged and practically invisible animals in every environment. A tawny, countershaded (darker above, lighter below) coyote walking on a tawny Colorado slope, for example, recently disappeared before my eyes merely by pausing and then reappeared simply by walking again. 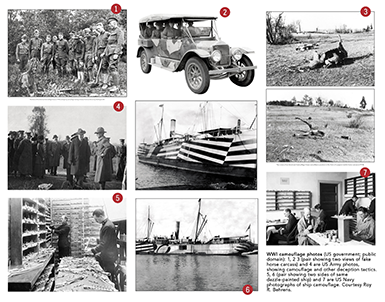 Among the vehicles in the 1918 Fourth of July parade down Fifth Avenue in New York City was a truck carrying a large-scale model ship. Adorned in a dazzle camouflage scheme (probably mostly black and white) in a nest of stars and stripes below, it was labeled with a sign that read “Built by Finnish shipbuilders, launched by Foundation Co., Kearny, New Jersey.” (Actually, the spelling is more eccentric than that: "Build by Finnish Ship Builders Launchd by Foundation Co., Kearny NJ.")

We’ve found four photographs of what may be the same parade float. Three of these are moving to the left, and appear to have been taken by the same photographer just moments apart. But the fourth (see colorized version above) is moving toward the right, so it may have been the work of a second photographer, on the opposite side of the street.

Sounds like a reasonable theory, but there are some inconsistencies: In the group of three photographs, the men walking along with the float are wearing fedora hats, but in the single photograph the men are dressed not in fedoras but in straw boater hats. Hmm. Were there two or more ship building floats that day, perhaps in recognition of the different nationalities of the shipbuilders? Or, was there an exchange of hats or escorts? On closer inspection, our best guess is that there were (at least) two different floats that day, largely because two different styles of dazzle designs seem to have been used on the two model ships—although, granted, we can see only the starboard side on one, the port side on the other.

Our versions of these photographs (reproduced below) have been digitally enhanced (dust and scratch removal, contrast adjustments, cropping) from the originals which are available online at the Library of Congress Prints and Photographs website at the link below each image.

The fourth photograph (sepia-toned below) is listed as being the same event, on the same day. The source of its original is the National Archive and Records Administration (NARA) website as linked below the image.

Above Opening slides for a talk we gave recently on animal camouflage, titled The Cat's Pajamas, at Fontana Park, a Buchanan County park near Hazelton IA.

We had a delightful time talking about the exotic coloration of pets and wildlife, to the widest age group possible, from preschool to retirement age. It's a beautiful park, with camping, fishing, hiking, picnicking, and an impressive Interpretive Nature Center. During our visit, we watched a thriving family of bison, including one just recently born.

Above Model of the USS Agwidale, US cargo ship, showing dazzle camouflage scheme (1918). The model is on exhibit at the Mariners' Museum, Newport News VA. Photographed by Mr.TinDoc (2012) and posted online at flickr with some rights reserved.

The staunchest upholders of the academic in art can scarcely carry their opposition to cubism into its new field as a basis for camouflage. It has been evident, for some time, to people living near Atlantic ports, that cubism has been pitched open as the most valuable system of reducing the visibility of ocean liners. The seemingly systemless way in which greens, blues, grays, and pinks are panted on in bands and blocks of color has quite puzzled persons who have gained close views of these ships; but at a distance of a mile, another story is told, for the various masses of color set up a curious and disconcerting dazzling effect. Painting with gray has been largely superseded by the new method, which escapes the silhouette effect that too often betrayed the gray ships.
Posted by Roy R. Behrens at 5:08 PM

Above The cover of a wonderful forthcoming book by award-winning children's book author Chris Barton, titled DAZZLE SHIPS: World War I and the Art of Confusion (Milbrook Press, 2017). The illustrator is Victo Ngai, about whom you can find out more at this Science Library Journal post.

The cover is phenomenal, as is the one full-color page spread I've seen (reproduced below). The illustrator is a graduate of the Rhode Island School of Design (my alma mater as well), where she studied illustration. As anyone knows who follows this blog, the RISD Fleet Library is also the location of a collection of the full-color lithographic dazzle ship camouflage plans from WWI (one of only three surviving sets).

Wish you had a copy now? That would be wonderful. Unfortunately, I'm jumping the gun because I couldn't wait to share the news. It won't actually be published until September, but you can pre-order it now.