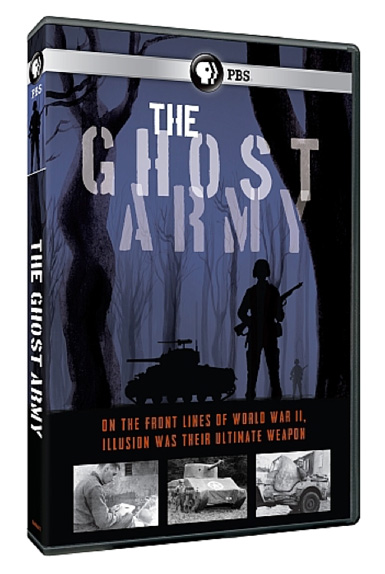 Good news! Rick Beyer's excellent documentary on the Ghost Army, the World War II deception unit, which premiered only last week, is already available for online purchase for only $19.95 at the PBS website here.
Posted by Roy R. Behrens at 3:47 PM


Above I've known about this documentary film project since the fall of 2011, when I was interviewed for it. But until today I hadn't realized that this "trailer" is available online at Vimeo. I'm not sure when the film is coming out, but it promises to be one of the richest, most comprehensive documentaries on the subject, and especially on high difference disruption, sometimes known as dazzle camouflage or (more fashionably now) razzle dazzle. As nearly everyone knows by now, it came into widespread use during World War I, initially as a means of throwing off the calculations of German U-boat torpedo gunners.

Spurious claims on websites state that it didn't actually work, but scientific testing at MIT (c1919) confirmed that it did (more about that in a forthcoming post). It is also commonly said that, with the introduction of radar, the practice died out during World War II. But that doesn't seem to be the case, and indeed, on the basis of contemporaneous photographs, some of the most puzzling dazzle designs were produced during WWII, by both sides of the conflict.

This photograph (from WWI) was first published in a magazine article by American artist (and a prominent US Navy camoufleur during both wars) Everett L. Warner. It shows the dazzle-painted SS Congaree (the photo is dated December 9, 1918), looking like a conglomerate of pyramids. This, like many of the best dazzle plans from that time period, was devised by marine artist (and camoufleur) Frederick Judd Waugh. If this photograph looks retouched, it's because it is. It was scanned from a black-and-white lantern slide in Warner's collection (following WWII, he gave slide talks on the subject), on which he had attempted to add translucent color tinting (not very successfully). It has always reminded me of the stage sets from the German silent horror film, The Cabinet of Dr. Caligari (1920), which it predates by a couple of years.

Filmmaker Jonnie Morris will be among the speakers (along with Ann Elias, myself and others) at the Sydney College of the Arts (August 8 through August 11, 2013) at an international conference called Camouflage Cultures: Surveillance, Communities, Aesthetics, Animals.
Posted by Roy R. Behrens at 9:45 AM 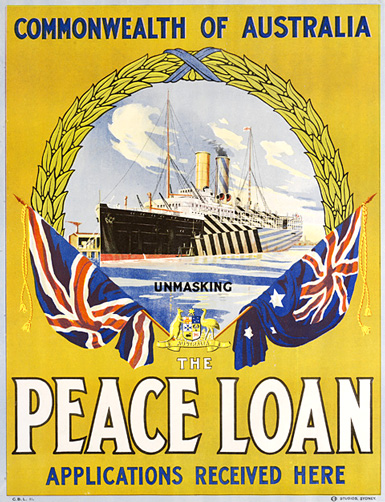 Above This is an amazing poster, published in Australia (c1918) during World War I. It is a promotional poster for the wartime Peace Loan program, which makes use of an Australian ship, the rear half of which is painted in striped dazzle camouflage, while the front half is not. Below the ship is the caption "unmasking." A print of the original poster is in the National Museum of Australia, Australian War Memorial, ART V00010.

As noted in an earlier post, the Sydney College of the Arts (SCA) will host an international conference and exhibition on that campus on August 8 through August 11, 2013. Titled Camouflage Cultures: Surveillance, Communities, Aesthetics, Animals, it was initiated and organized by SCA faculty members Ann Elias and Nicholas Tsoutas. The slate of events is unusually diverse in the cross-disciplinary breadth of its presentations. See ad below. Details and a complete list of presentations are online here. 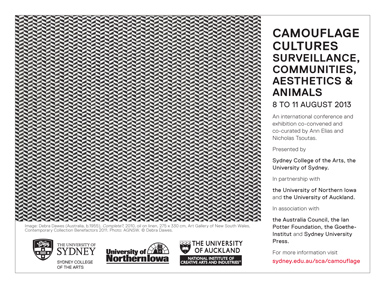 At last, coming soon to public television (Tuesday, May 21 on most PBS channels) is Rick Beyer's long-awaited documentary on the World War II American Army camouflage and deception unit, The Ghost Army. Below is a background starter, but the website has much more—

In June 1944, a secret US Army unit went into action in Normandy. The weapons they deployed were decidedly unusual: hundreds of inflatable tanks and a one-of-a-kind collection of sound effects records. Their mission was to use bluff, deception, and trickery to save lives. Many were artists, some of who would become famous, including a budding fashion designer named Bill Blass. They painted and sketched their way across Europe, creating a unique visual record of their journey. The story of what these men accomplished was hushed up by the Pentagon for more than forty years. more>>>
Posted by Roy R. Behrens at 3:05 PM


Figure disruption (as shown above in one of Bruce Bairnsfather's famous World War I cartoons) is one of a rich range of topics explored at an upcoming conference and exhibition on camouflage at the Sydney College of the Arts, the University of Sydney, Australia, August 8-11, 2013. Here is a conference overview—

Rich in history, aesthetic possibilities, political suggestion, and metaphor, camouflage also expresses the spirit of contemporary life. Strategies and acts of blending, assimilation, invisibility, disruption, mimicry, and masking proliferate today in art, war, and society. Camouflage’s diverse contexts include surveillance, fashion, and nature. It crosses boundaries of human and animal, traverses disciplines of military science, biology, anthropology and sociology. And at the intersections of disciplines it provokes innovative thought and practice. Camouflage is inseparable from the histories of science and art, but in addition it represents a powerful conceptual tool for negotiating everyday life and politics in the 21st century.

The conference and exhibition offer an exciting range of interpretations and understandings, research and investigation into the subject of camouflage and in relation to visual representation and the contemporary world. The event showcases the work of staff from the SCA and other leading national and international artists, academics and writers.

For a detailed schedule of events and information on how to register, click here.
Posted by Roy R. Behrens at 2:40 PM