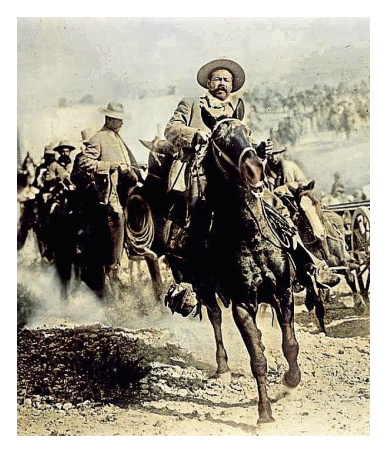 JUAREZ, Mexico—Camouflage as a war art was known in Mexico long before it was used in Europe although not by that name. Mexican soldiers, since the days of [Porfirio] Diaz, have practiced concealment for military advantage. They have been known to place their high crowned hats on poles stuck in sandhills in such a way as to make the enemy force believe they were defending the hill, then flank the enemy from another direction. [Victoriano] Huerta’s Federal soldiers used camouflage to conceal the portholes in the sides of armored railroad cards. A checkerboard pattern was painted on the sides of these cars, and black and white squares concealed the rifle ports.

The Mexican fighting men have also used the trick of covering their high hats and bodies with brush to advance on enemy positions through thickets. [Pancho] Villa originated the plan of driving a herd of cattle into a besieged town at night in order to draw the fire of the defenders and to explode any mines in the streets.

The most primitive though effective application of camouflage in Mexico was the practice of the Tarahuamara Indian scouts with [Francisco I.] Madero’s revolutionary army. These half-naked scouts would precede the army and by doing a kind of patter dance, raised a cloud of dust that concealed them from the view of the enemy and permitted them to approach enemy positions without being detected in their envelope of dust which resembled a whirl common on Mexican deserts.
Posted by Roy R. Behrens at 4:33 PM