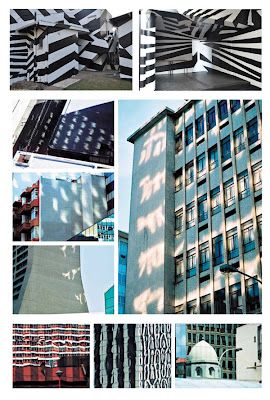 Above In recent days we've been fortunate to find online examples of the artwork of Stephen Hobbs, a South African artist from Johannesburg. Since the 1990s, he's been using photography, video and installation media to explore and to comment on various aspects of urban life, including projects that pertain directly to camouflage. The top row of the images here shows two installation photographs from an architectural installation titled Dazzle (2009), in which he dazzle-painted a small building (inside and out), employing spatial distortion techniques that were refined by artists for ship camouflage in World War I, particularly Norman Wilkinson and Everett L. Warner. There is an online link where more photographs of this can be accessed, as well as his preparatory drawings, all of which are fascinating. The remaining images in the above cluster are a sampling of his equally interesting photographs of architectural aspects of the city in which camouflage is found, not constructed. In learning more about his work, I found it especially helpful to read three published articles/interviews, available here as pdfs. One other comment: One of Hobbs' inspirations has been the work of Russian Constructivist Vladimir Tatlin. By entire coincidence, on the same day that I found Hobbs' work online, I also found online sources that claim that Tatlin designed camouflage during World War II.
Posted by Roy R. Behrens at 9:41 AM 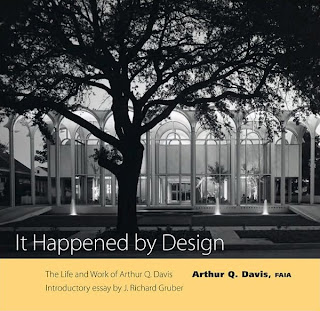 Above The cover of the autobiography of New Orleans architect Arthur Q. Davis, It Happened by Design: The Life and Work of Arthur Q. Davis (University Press of Mississippi / Ogden Museum of Southern Art, University of New Orleans, 2009). In collaboration with Nathaniel Curtis, working as Curtis and Davis, he designed some of the landmark modern buildings in New Orleans, including the Louisiana Superdome, New Orleans Rivergate Exhibition Center, New Orleans Public Library, and various other structures, both national and international. Born in New Orleans in 1920, Davis served in the US Naval Reserve during World War II, in connection with which he was sent to Dartmouth College to learn about naval camouflage (I wonder if he knew Adelbert Ames II, who was at Dartmouth at the time, and whose research was related to camouflage). He was then sent to Washington DC, where he worked as a ship camouflage artist in the Bureau of Ships (c. 1943) under the direction of artist Charles Bittinger, who had also been connected with naval camouflage during World War I.

While he doesn't mention them by name, Davis must also have worked with Everett Warner, Bennett Buck, Sheffield Kagy, William Walters, Arthur Conrad, Robert R. Hays, and Eliot O'Hara. He recalls: I developed a very effective ship camouflage design for painting these massive forms [destroyers, cruisers, even New Jersey Class battleships] and was sent down to the Brooklyn Navy Yard to assist with the actual painting of the ship…Using a long stick with chalk on the end, I drew the patterns on the actual hull in accordance with the design I had developed in the studio in Washington. It was he who designed the camouflage for the USS Missouri. He continues: I was very happy working in Washington at the Bureau of Ships' Camouflage Department and would have stayed there indefinitely, but instead he was reassigned to the Pacific war zone.

It was also of interest to learn about Davis' architectural training at Harvard's Graduate School of Design, which was then headed by Bauhaus founder Walter Gropius, with whom he worked directly. One of his classmates at Harvard was I.M. Pei. After graduating, he worked as an intern for Eero Saarinen in Michigan.
Posted by Roy R. Behrens at 11:02 AM