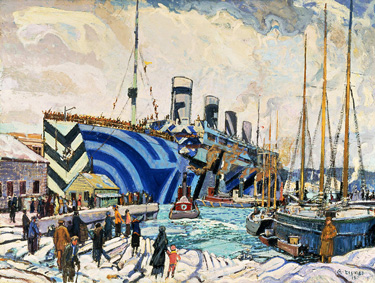 Arthur Lismer (1885-1969), a British-born Canadian painter and a member of the Group of Seven, was not a camouflage artist. Beginning in 1918, he served instead as an Official War Artist and was assigned to document naval activities at the Halifax Harbor for the Canadian War Records. Among the subjects he portrayed were dazzle-painted ships, the best known example of which is the painting reproduced above, The Olympic with Returned Soldiers (1919). The original artwork is in the collection of the Canadian War Museum.
Posted by Roy R. Behrens at 3:22 PM 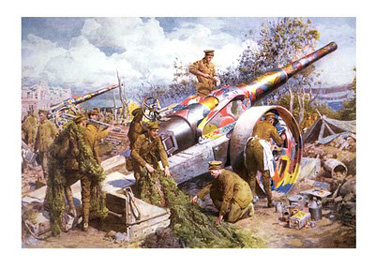 Here's an oddity: In an earlier post, we reproduced a painting (the top image above) by an artist named S. Ugo, of British soldiers applying a dazzling camouflage scheme to field artillery. It was reproduced initially in The Sphere (August 3, 1918:86-87). But more recently, we ran across a second reproduction (the bottom image above) of what at first appears to be the very same painting. This one appeared in color in Samuel John Duncan-Clark, History's Greatest War: A Pictorial Narrative. Geographical Publishing Company, 1919, pp. 50-51. As becomes clear when the two are viewed together, there are some curious differences. The bottom one is a flopped version in which the artillery faces left. In addition, four airplanes and a dirigible have been added to the sky. Notice that it's also cropped—and the artist's signature has disappeared.
Posted by Roy R. Behrens at 5:18 PM 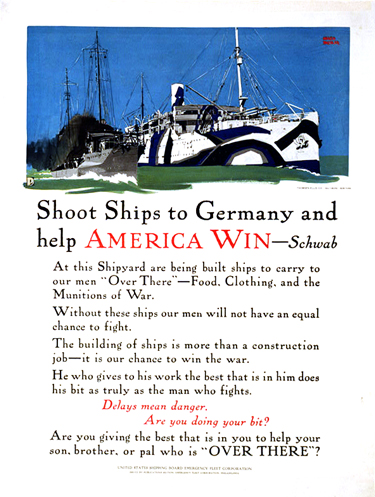 Above World War I poster by American illustrator Adolph Treidler (1886-1981), printed and distributed by the Publications Section of the US Shipping Board, Philadelphia, in 1917. A student of Robert Henri, Treidler designed a number of recruiting and Liberty Loan posters, and more than two hundred magazine covers. Courtesy Library of Congress, Prints and Photographs. For more on dazzle camouflage, see SHIP SHAPE (2012).

The work of camouflaging has been perfected to such nicety that a ship can be decorated with its particular pattern of streaks and stripes with astonishing dispatch. It is a matter of record that at one American port an 8,800-ton freighter was completely camouflaged in 24 hours. The district camoufleur was notified late Saturday afternoon that the vessel in question would be ready to sail Monday evening. By midnight Saturday the design for the ship had been selected and the pattern indicated [with chalk lines] on the hull and superstructure. With the arrival of necessary supplies at that hour, 62 painters were set to work and by 5:30 Sunday afternoon the ship was ready to defy the most keen-sighted commander of a Prussian U-boat.


From Peter Krass, Portrait of War: The US Army's First Combat Artists and the Doughboy's Experience in WWI. New York: Wiley and Sons, 2007, p. 18—

On day nine out to sea, [Ernest] Peixotto and [Wallace] Morgan's convoy was met by a dozen destroyers that were to escort them into port. The coloring of these warships caught Peixotto's eye; they were "brilliantly camouflaged like wasps, queerly striped with black and white, with spots between of yellow, gray-blue, and water-green"—the softened tone of Monet's paintings. "Like wasps too they darted around us," he wrote, "zigzagging across our bows, dropping astern, watchful, then, with a burst of speed, forging up ahead again."
Posted by Roy R. Behrens at 9:01 AM 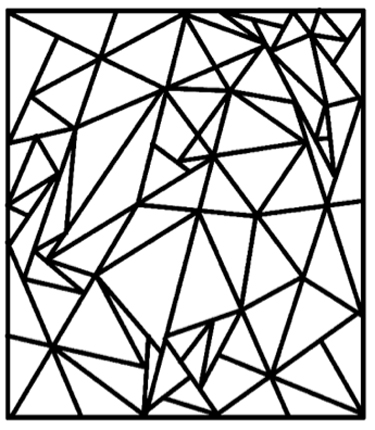 Reproduced above is a seemingly senseless arrangement of lines, one of many that appeared on the entertainment pages of American newspapers in 1913, in the wake of the public reaction to cubist and futurist visual art. It was the year of the Armory Show, the premier exhibition of Modern Art in the US. Four years later, when dazzle ship camouflage was adopted in 1917, the public immediately claimed that it looked like cubism, harlequin leotards, crazy quilts, and embedded figures (or "picture puzzles") like this one. When the above drawing appeared in an issue of the San Francisco Sunday Call (1913), the reader was challenged to fill in shapes within the box in such a way that a "cubo-rooster" would result. Below is the answer which appeared in the paper the following week. 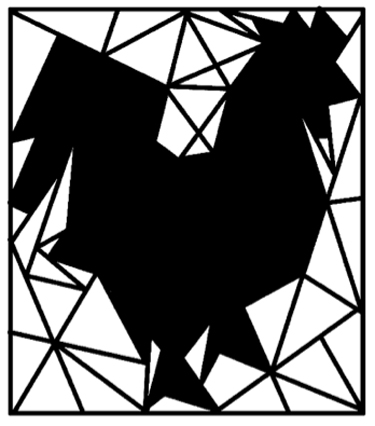