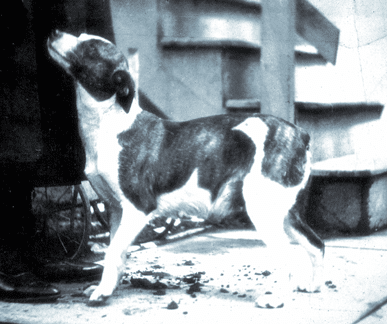 Above A vintage news photograph of a dog that appears to have the shape of a white chicken on its backside.

The art of camouflage was resorted to in one instance in making a scene for [a motion picture titled] Young America… Jasper, the pet dog of the leading boy character, refuses to chase chickens. He was brought up among chickens and carefully trained from puppyhood not to molest them. When he was “ordered” to do this in the [filming], he positively refused.

It was necessary to get another dog [to use as a stand-in] for Jasper, and, while a canine was found of the same size and approximate type, it did not have the correct spotting. The double was turned over to the scenic artist.
Posted by Roy R. Behrens at 1:13 PM