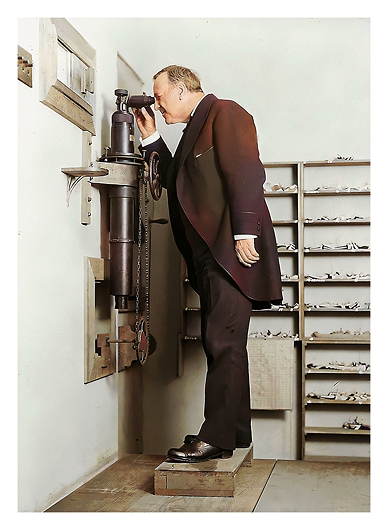 There are various photographs of Daniels in connection with his wartime duties, both army and navy. In the government photo above, for example, he is shown while on a visit to the US Navy’s Camouflage Section in Washington DC. He is peering through a submarine periscope (positioned upsidedown) to view dazzle-painted wooden ship models (like those on shelves behind him) that had been set up for testing in an adjoining room. 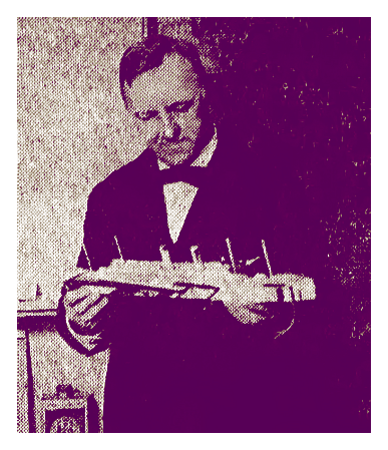 In a second (poor quality) news photograph (above), he is in the same facility, probably on the same day, where (according to the caption) he is examining the model for the USS George Washington (as published in UNCLE SAM HAS CAMOUFLAGE FOR SHIPS IN PEACE in The Brooklyn Daily Eagle (New York), on April 27, 1919, p. 9). According to Everett Warner (who oversaw the artists who designed ship camouflage) this was one of the largest ship models, measuring twenty-two and a half inches in length.

There is a surviving photograph of the camouflaged model for the same ship (below), but it shows only the opposite side (the port side), while the starboard side is visible in the photograph of Secretary Daniels. 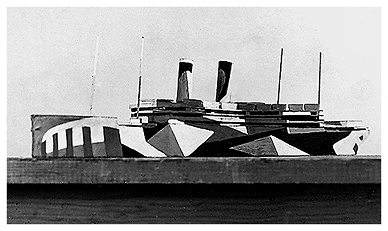 It is of additional interest to note that this camouflage scheme was apparently never applied to the USS George Washington. According to an article by Robert Skerret (1919), at the close of the war, when that same vessel was selected to transport President Wilson to Europe, the ship and its fleet of escorts were not dazzle-painted, but instead were covered in “Omega Gray,” a monotone developed not by US Navy camoufleurs but by the Submarine Defense Association.

[OOPS I seem to have made a mistake. I forgot that in an earlier post, I published photographs of the USS George Washington painted in this same dazzle camouflage scheme, and quoted from texts that described it. It appears to have been repainted at a later date in monotone gray.]

In a third photograph (below), Daniels is shown out of doors, presumably in an army training field, talking to an infantryman who is camouflaged to blend in with the surrounding foliage. 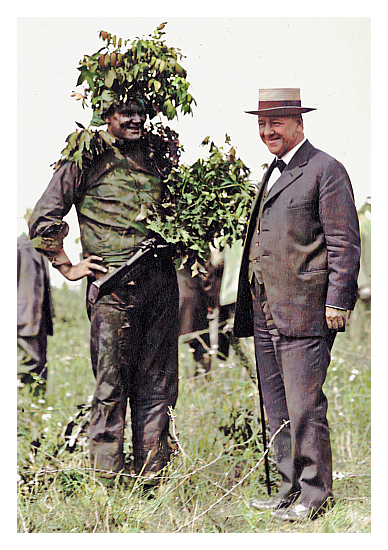 Daniels is commonly credited with being a supporter of women’s suffrage. And, while serving as Secretary of the Navy, it was he who first enabled women to be employed by and serve in the US Navy.

There is more information about his support of women's service in a news article in the Poughkeepsie Eagle News (LIFE HAD ITS PROBLEMS FOR SAILOR GIRLS OF 1917), on September 29, 1942—

"Is there any law that says a yeoman must be a man?" Secretary Daniels asked his legal advisors. The answer was no but only men had been enlisted up to then. The law did not say "male."

"Then enroll women in the Naval Reserve as Yeomen," Secretary Daniels said, "and we will have the best clerical assistance the country can provide."

The Navy got a total of 11,000 yeomen (F) by calling women to the Naval Reserve, mostly to take care of clerical work at the Navy Department in Washington. Some Yeomen (F) were translators, some were draughtsmen, fingerprinters, camouflage designers [assigned to the Camouflage Section], recruiting agents, or workers in the Bureau of Medicine and Surgery or in Naval Intelligence."

According to Aryeh Wetherhorn in The Easter Egg Fleet (2020), among the American women who held camouflage-related positions in the Office of Naval Intelligence (ONI) were Sara Elizabeth Carles [sister of artist Arthur Beecher Carles, who also worked as a ship camoufleur], Ruth Prentice Thompson, Lilian A. Jones, Jean Knox, Sara Scott, and Florence Dorothea Fischer.

That given, there are deeply troubling aspects of Daniels’ actions and beliefs. He has been described as a “vehement white supremicist and segregationist,” and a supporter of the Ku Klux Klan. It is especially disturbing to read about his connection with the Wilmington Massacre of 1898, in Wilmington NC.