immense saw teeth and cubistic stripes that were not

Above I was so pleased to find this. It is a very rare full size two-page illustration spread having to do with World War I ship camouflage. Drawn by a phenomenal (if largely unknown) illustrator named Louis Biedermann (1874-1957), it was published as a center spread in the Los Angeles Evening Express, on Sunday, August 18, 1918, perhaps in an entertainment section. This is not its original color (I've colorized it), since presumably it was printed by a four-color halftone process (more or less equivalent to CMYK). Of the very few copies that may still exist, the colors have most likely faded by now, and the newsprint on which it was printed has degraded.
In an online posting by Geographicus, an antique maps dealer in New York, the Illinois Daily Free Express (no date) is quoted as having said—

[Louis] Biedermann is panoramic. He is panoramic in his thinking. His mental as well as his optical perspective presents a complete and extended view of all directions. The breadth of his understanding is more panoramic, perhaps, than his art.

Too bad this illustration cannot be seen more clearly here. It is fantastic and highly detailed, so does not do well at a very small size. See magnified detail below. 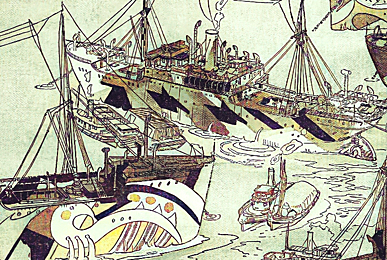 CAMOUFLAGED! How the Erstwhile Merchant Fleet Looks in Its War Paint.

“Oh, what a tangled web we weave
When we practice to deceive

—especially when the web is woven of shuttling ships, and the destined victim of the deception is some U-boat skipper squinting through a hastily protruded periscope and vainly trying to get the range of a moving target from which most of the horizontal and vertical bearing points have been eliminated, while whorls, saw-teeth and triangles of black, white, gray, blue, green and pink blend dizzily into the shifting wave outlines of the seascape. We are well past the practice stage, though, and there are days when the results of ship camouflage turn New York Harbor, for instance, into a floating nightmare. For the benefit of the hundreds of thousands of other readers who never see the waterfront, Mr. Biedermann has indicated here the general effect of the “motley rout,” though purposely avoiding any approach to a portrait of any actual ship.

HOW NEW YORK HARBOR IS PROTECTED FROM U-BOATS: Every Agency of Naval War Seen: Painted Ships and Weird Effects on Every Hand, but the Business of Getting Men and Supplies “Over There” Goes on as Though There Were No New Menace at Hand, in St Louis Post Dispatch (St Louis MO), January 23, 1918 [from an article published earlier in the Springfield Republican (Springfield MA), no date]—

It was in the lower harbor, below the Liberty Statue, that New York began to show as a port on a war basis. Here were the camouflaged ships at anchor. There were hundreds of them, steamers, schooners, tankers, all ages, shape and sizes. Blue, black and white, all shades of gray, occasionally green, the stripes ran up and down their sides. There were wildly zig-zagging stripes, stripes that spread outward and upward from the center of the ship’s side like a fan, stripes that curved upward, terminating in a superstructure of the bridge in lines like those of the bow; horizontal stripes jagged on their upper edge with immense saw teeth; cubistic stripes that were not, strictly speaking, stripes at all, but like the patterns of a crazy quilt.

But camouflage does not show to best advantage on gray mornings. It does not dazzle at near view, and at the first sight of the ships, coming among them suddenly from around the end of Governor’s Island, the definiteness of outline was a mild shock to preconceived notions. Nevertheless, the purring of the airplane motor overhead was not plainly audible. To the right of the course, off Staten Island, lay a group of old warships at anchor, but with steam up, lookouts posted and guns trained. Far down the harbor, between the anchored shipping and the Narrows, a squadron of patrol boats, lean of bow, square of stern and built for speed, passed leisurely back and forth across the water, one of them dragging with it a captive balloon of the sausage type which perked along with peculiar and rather ridiculous motions, as though resenting each tug of the rope. On nearer view the lookouts on these smaller craft were also seen to be posted, and at their neat little three-inch stern guns, a group of husky sailors invariably “stood by.” Whatever camouflage might be worth at that short range, it was plain that other precautions were all being taken.

A Hole in the Ship
By the time these details of the protecting fleet were visible, the virtue of the camouflage was apparent also. First a ship with a broad blue-gray band zig-zagging up its center through the smokestack seemed suddenly, at a range of perhaps half a mile, to have developed a hole in its middle. One seemed to be looking through it at sky, and, to ocular appearances, except under the closest scrutiny, it ceased to be a ship at all, but some naval monstrosity split in two. At about the same distance another ship which lay with its bow pointed toward us, suddenly appeared to have turned about and to confront us with its stern. So marked was the illusion in this case that no among of scrutiny could separate the real from the illusion. This was the case, too, of another ship whose stern suddenly began to appear as a broadside.

The ship with the bow curve painted on the superstructure demonstrated a unique merit. Instead of one big ship. it gave the illusion of being two smaller ones, the bow of the first—the real one—seeming to be crossing the bow of the second—a fake one—at a narrow angle. Across even this slightly choppy water the saw-tooth design seemed to sink the ship in the wave motion until only the masts and the superstructure had anything like definite form. Only the fan-shaped camouflage and the distinctly cubist patterns retained at a mile, still a very fair torpedo range—anything like their actual outline, and it was easy to believe that with the fan it would be different when the spray was flying, that the crazy-quilt pattern would puzzle the eye of the keenest observer when the sea was a dazzle of bright sunlight and wave shadows. On the whole, right in the harbor, lying at anchor, these ships would form no perfect target at anything like a sportsman’s range.
Posted by Roy R. Behrens at 5:20 PM