fad, fancy or illusion—camouflage is without limitations


Above Since yesterday, when we blogged about the camouflage of the USS Milton and reproduced a photograph of the dazzle pattern on its starboard side, I have received more information about the same ship. Aryeh Wetherhorn, an American Navy veteran, who is now based in Israel, has provided a photograph of the port side of the Milton (as shown above, although of course I could not resist tampering with it, in hope of revealing more detail), as well as photographs of the original camouflage plans. Reproduced below is a close-up detail of one side of that ship’s camouflage scheme.

When the initial plan was issued during World War I, it was designated by US Navy camoufleurs as Type 10 Design L. According to Wetherhorn, not only was this scheme applied to the USS Milton, but to three other ships as well: USS Alpaco, USS Baxley, and USS Botsford. The colors employed in its paint scheme were black, gray-white, and two variants of blue (distinctly different from the AI colorized version above).

Colored renderings of this plan (as well as scores of others), prepared by Talya Shachar-Albocher, have been reproduced in a new book that Wetherhorn published earlier this month. Titled The Easter Egg Fleet, it is available through Amazon. 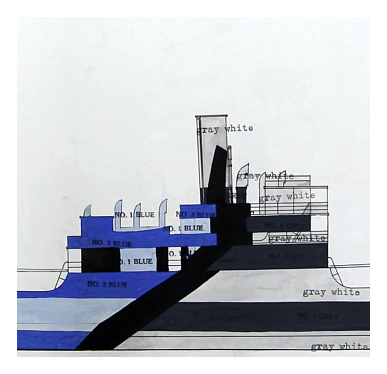 Camouflaging in time of peace, as well as in war, appears to be without limitations. We hear it on every side; we see it where we look. Is it a fad, a fancy or an illusion, an imported fashion, a licensed privilege or a contagious disease?

Whatever it is, it has gripped the merchant, the lawyer, the doctor, the tailor, the butcher, the baker, the candlestick maker. The artists have gone mad and now that the musicians are under its spell—I dare not predict its fate.