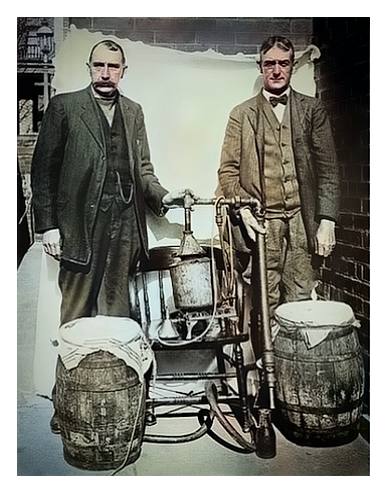 Above Prohibition agents with a confiscated moonshine still. Library of Congress Prints and Photographs.

Montana prohibition officers are searching for a war veteran who saw service overseas in a camouflage outfit. According to [Montana law enforcement], bootleggers are believed to be employing the returned veteran to conceal their moonshine stills on Montana farms.

Costello said a still was recently discovered in a tent near Boseman MT after many weeks' search. The moonshine-making outfit had been hidden in a tent, painted green, and pitched in a clump of willows. Several times the dry officers came within a few feet of the hidden still but were unable to locate it because of the successful camouflage. A large number of barrels, hidden in the willows nearby, were painted green.

Three hundred gallons of whiskey, 1,244 pounds of sugar, 1,000 pounds of corn, and 15 barrels of mash, ready for distilling were found in the cache.

Evidence of the work of the veteran has been uncovered in other parts of the state, it was said. In a northern Montana grain field, a still was discovered hidden under a tent which was covered with bunches of grain, tied together, and ready for harvesting. For some days dry agents thought the disguised tent was a mound of grain.

Near Havre MT, a still was found on a mountain. The still was made of canvas and was located on the edge of a cliff. Painted to resemble rocks, it was many weeks before the moonshiners’ outfit was discovered.

At Great Falls a still was recently found on the banks of the Missouri River. Here the still was located in a cave. Painted canvas trees were used to disguise a door, which formed the entrance to the cave.
Posted by Roy R. Behrens at 6:39 PM